SAVVY SUMMERS A MUST FOR LFC

LIVERPOOL supporters have grown accustomed to greeting anything Ian Ayre says with a raised eyebrow and a gentle shake of the head, and so few will have been too reassured when he did the rounds on Thursday morning to insist he was “absolutely certain” Luis Suarez would be at Anfield next season following comments from the striker, while away on international duty with Uruguay, in which he appeared to make clear his interest in joining a club that could offer him immediate Champions League football. Yet whether Ayre had spoken or not, Kopites everywhere should be used to this now; that sound of drums that grows louder and louder as soon as a high-class talent first hints at a desire to move away from Merseyside.

It used to be a once-in-a-decade rarity to see a top player in their prime leave Liverpool before the club wanted them to – there was Kevin Keegan in the ‘70s, Ian Rush in the ‘80s, Steve Mcmanaman in the ‘90s and Michael Owen in the noughties – but since 2009 it has become almost bi-yearly in average, with Xabi Alonso, Javier Mascherano and Fernando Torres all wriggling free for a supposed better life elsewhere. It takes some getting used to, but sadly that is the situation we find ourselves in and there is every possibility that Suarez could be the next to break our hearts. 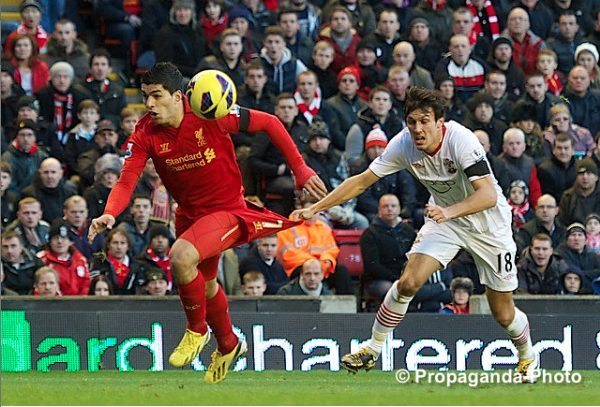 LFC mustn't be caught with their pants down this summer (Pic: David Rawcliffe, Propaganda Photo)

Before going on, let’s first knock this ‘lost in translation’ stuff on the head. While what Suarez said ahead of Uruguay’s World Cup qualifier with Paraguay on Friday may have been given a twist, the gist of it is sure to have been accurately reported and it continues to boggle the mind that players do not think that what they say away from this shores will eventually land back home. Suarez was simply answering a question put to him when he said “if another team comes around with more prospects of competing in international club competition games, which is willing to have me, they are welcome,” but, equally, he should have been aware of the bomb he was detonating. It is tough to stomach but that is what we have to do, and after all, who can blame a player of Suarez’s calibre for sending hints and invitations towards the direction of Europe’s current elite? The guy is outstanding, the scorer of 29 goals in 40 club appearances this season and a forward of such skill, ingenuity and determination that it is occasionally hard to believe he exists at all. Of course he should be playing for a club that is competing for titles and is regularly involved in the Champions League. Far less talented players are doing that already.

What we can hold onto as supporters is the fact Suarez signed a contract extension until 2017 last summer, and not only has a clear love for Liverpool but also a firm admiration for the manner in which Brendan Rodgers is trying to push the team back onto the summit of English and European football. But he is 26, at the peak of his powers, and come the end of the season, when Liverpool are unlikely to have finished any higher than sixth in the Premier League, Suarez may just have decided that he cannot wait any longer to join one of the host of clubs that are likely to come calling, with Juventus, Manchester City and Bayern Munich (whose soon-to-be manager, Pep Guardiola, happens to be the brother of Suarez’s agent) among those believed to be interested in Anfield’s No7.

What Liverpool must do is plan for the worst. It is six months since Dave Fallows and Barry Hunter began work as the club’s new scouting supremoes and given the fanfare that greeted their arrival (Rodgers said they would prevent a repeat of the calamity that characterised the last summer transfer window), it should be fair to presume that they now fully operational and have already begun filling dossiers with the names of potential future recruits.

For too long Liverpool’s signings from abroad have been a frustrating mix of the good, the bad and the ugly; for every Alonso there was a Biscan and Diao, for every Hyppia, a Pellegrino and Paletta, and quite simply if a club cannot recruit properly, it stands no chance of succeeding. I’m no expert but I’d guess that a one-in-four-shit-signing ratio is just about acceptable, anything over that and you’re asking for trouble.

Fallows, Hunter and the rest of their team need to show savvy in recruitment and, crucially, act decisively. As soon as a talent is identified, work must begin quickly to sign him up, because once the likes of Barcelona, Real Madrid and City start sniffing around the clock has begun ticking on Liverpool’s chances of getting that player and their chances of succeeding reduce significantly.

Here there must also be some loosening of FSG’s transfer straightjacket, the almost obsessive desire by the owners to only sign players of a certain age and, as John W Henry wrote in his infamous open letter of last September, avoid “overpaying for players.” Well of course nobody wants to overpay for players, but gambles may have to be taken if the club are to land their desired targets.

Suarez is a case in point. In hindsight he has proven a steal at £22.7m, yet when Liverpool signed him there were legitimate questions being asked about a player who had developed his reputation for scoring a high frequency of goals in the Eredivisie and whose temperament was a concern following his seven-match ban for biting PSV Eindhoven’s Otman Bakkal on the shoulder. He was deemed a risk and, had he been inclined, Henry could have decided that the player did not justify the fee. Certainly that could have been the case had Liverpool tried to sign Suarez last summer at a time when the club’s owners were in full damning mode regarding the “errors of previous regimes.”

Not to have signed Suarez would have of course been utterly foolish and to replace him may require an equally large leap of faith. That is a prospect nobody associated with Liverpool wants and hopefully it will be delayed for another season at least. My hunch is that the striker will stay put for at least 12 months, but I’m prepared for the worst.

Players come and go, it’s how you replace them that counts. Suarez is proof of that. The likes of Ayre should worry less about what he says and focus more on working out how best to react should he decide to leave this summer. Yet again, much depends on the actions and reactions of Anfield’s leading figures over the next few months.