IN any piece concerning prejudice it would be unfair and inequitous not to announce my own.

No one can be completely objective in most walks of life unless they don’t really care in the first place (Bobby Fischer v whoever it was always left me cold) and as much as any journalist can try to set personal feelings aside and write against their own minds a little bit comes out.

This isn’t made any easier when some abhorrent or at least erroneous views are protected behind an armour of ‘yeah but as a fan you’d always think that.’ Paddy Barclay used his column to spout the most ludicrous nonsense during the Suarez incident last season and threw the vitriol of ‘tribalism’ to all who disagreed. Now, of course, my own view that Barclay is a man with fading talent and leans towards the easy, traditional blazer and tie set with a heavy order of sensationalism is, in its own way, prejudiced but at least it can be supported by pointing out that Barclay still writes about LFC as often as possible from his new home of the London Evening Standard where his loyal readers will happily forego stories about their own teams to hear about a club 200 miles away. Liverpool are always good copy and Suarez bashing will always bring home the bacon. Maybe that was just his opinion though. Maybe he was concerned about casual racism? He then made some horrendous comments about Heysel on Twitter and was rightly censured for it. Ah. An agenda then.

Anyway, with the Player of the Season up for grabs and the front runners being Luis Suarez and Gareth Bale, the League’s top goalscorer against the frighteningly talented Welshman, it should be a close match. Should be. Why then is one of them an outside 7/1 in a two horse race? The award is based purely on what happens on the pitch, isn’t it? Fat chance. 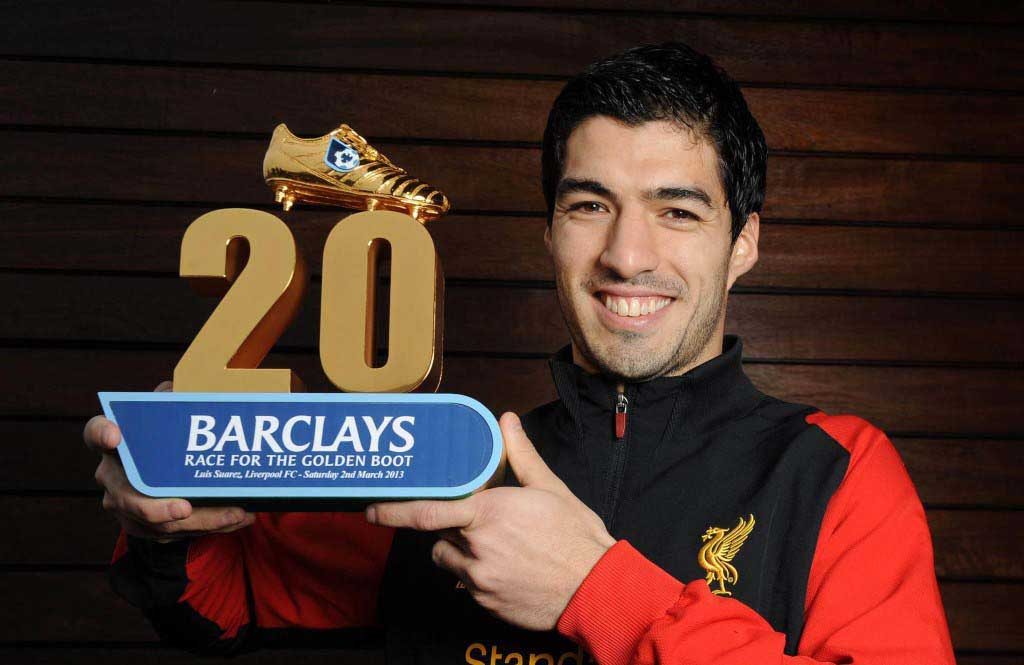 Suarez with his prize for being first to 20 in the league (Pic: Barclays Football)

My own prejudices then. Well, they won’t be popular. See, despite being committed to the Red cause as much as everyone and anyone else I just don’t particularly like Luis Suarez. I don’t hate him or anything like that. I admire him greatly and don’t consider him to be the racist cheat that Martin Samuel, Ollie Holt and their ilk would have us believe but I just can’t shout his name in the same way with the same gusto that I shout others. I don’t proselytise this view as it’s peculiar to myself save for the odd semi-joking barbed comment to my mates and I’m aware that it’s wrong to dislike a man who is probably the future of your team. In any case my distrust is based on the flimsiest of premises.

Yes, I know. Anyone else would have done the same in those circumstances and had Jamie Carragher, a man whose statue I would gladly hewn with my own hands were I given the granite and the ability to do so, stopped a Shevchenko shot with both hands while setting fire to effigies of the Liver birds in Istanbul I wouldn’t have given the rankest of shits but this rankled. It wasn’t just the handball, it was the celebration. Again, had Carra done the same I would have raised an eyebrow more than raise cudgels but when your own team are wronged it’s hard to be objective. I have Ghanain in-laws, good kind people who were just pleased to be in the tournament and they didn’t care at all, in fact had even forgotten about it a week later. Not me though. I bear a grudge. I gathered my prejudice and pinned it to my chest and wore it even after he signed for us. Got to be honest.

As for Bale I have no stronger opinions other than his side parting crease irritates me. That’s it. I don’t like his club but as he is pleasingly mute as the majority of footballers should be and hasn’t ruined a romantic World Cup dream for me he’s fine. Strange how it works.

He’s also responsible for one of my Anfield memories. In the 2-2 draw in October 2007, kicking into the Kop he dived near the Kemlyn corner flag. No, that understates it. He dived terribly. Woefully. It was amateurish. It was disgraceful. It was hilarious. It was so bad that the crowd didn’t complain; they laughed. Much has been made of bad diving on The Anfield Wrap podcast and Bale is the prime exponent. He’s bloody awful at it.

Suarez isn’t much better and though he has more fouls against him than dives he still hasn’t got the hang of it.

Enter the prejudice. Suarez dives, Bale’s a fantastic talent. Suarez is a racist, John Terry is brave. Ryan Giggs slept with his brother’s wife, Ryan Giggs is a role model.

The agenda is clear. Homegrown players have it easier in the press. For the reams and reams of paper wasted on Evragate the coverage of Paul Elliot, himself a critic of Suarez and just about everything else Liverpool based, barely covered a page. The benign side of this is Jonathan Pearce’s treatment of Scott Parker, Jack Wilshere and Paul Scholes. He’s so effusive in praise of them that I suspect that he’s close to contesting paternity rights despite their somewhat over-zealous approach to tackling. Young and English? Fine.

Back to Suarez then. How is it possible for a man to be an outsider when he has hit three hatricks, scored possibly the goal of the season and is hauling Liverpool on his back for most games? Again, the award is based on ability, not past histories and personalities.

When is it time to leave him be and accept him as a gift to the game? John Champion’s ‘actions of a cheat’ comment when Suarez accidentally handballed it against Mansfield would not have been aired had it been any other player. Literally none. No matter what your views are on the Evra incident it’s clear that the media bear more of a grudge than I do. What’s more we’re not supposed to be fair and even-handed. We’re fans and we abuse United players and ex-players as a matter of cause. The media are supposed to report, not comment and not influence but that memo seems to have gone missing. Luis Suarez could cure cancer and still have Ollie Holt on his back.

I hope Luis wins it. I think he should as he means more to his club than Bale does to his but I expect Van Persie will finish above him in the ratings despite a recent quiet period. I don’t think we’ll see Luis kissing his wrist while wearing a tuxedo just yet. Media pride, media prejudice.