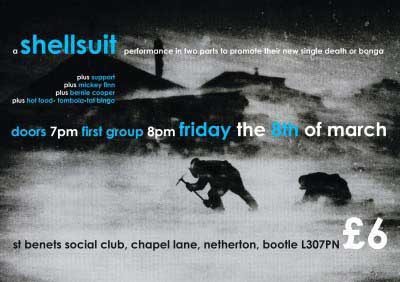 You may have heard already, but a few of us are going to New York this weekend as part of New York Sound City, which culminates in a British Invasion show in Brooklyn on Monday 11th of March.

But I don’t want the music fans of Liverpool to feel we have forgotten them, and there is plenty going on in the real capital of the musical universe this weekend.

Cult Liverpool band Shellsuit have always done things their own way, and tomorrow night they have chosen to launch their new single ‘Death or Bongo’ at the St Benets Social Club in Netherton. I’d never heard of it either, but apparently it is very nice, and the 130 from town takes you right there. To round off the unusualness, instead of a band supporting they have veteran comedian Mickey Quinn, and there is even rumours of a tombola. Its almost enough to convince you to miss a flight.

Tickets have almost sold out, so it is probably worth enquiring with the lads on twitter (@shellsuitmusic) to see what is going to be left on the door. And get down early!

Elsewhere this weekend The Threshold Festival (Fri-Sun) in the Baltic Triangle was good fun last year, and has a great line-up again, including many of the bands we have features (Esco Willaims, The Mono LPs, The Ragamuffins etc..). Tickets are still available, priced at the very reasonable £10 for one day or £20 for all three. For more details go to http://www.thresholdfestival.com/

Have a nice weekend everyone x