‘There can be no true beauty without decay.’

FIRSTLY, an apology. If you haven’t seen ‘Withnail and I’ then none of the following will make much sense. Maybe you’ve seen the odd scene but never managed to sit through the entire thing. Well, hopefully you’ll be curious enough to donate 107 minutes of your time to have a look at this glorious film. It’s not just a comedy nor is it a ‘student film’ (although it’s certainly popular with them).  It’s much, much more than that. It’s a tragi-comedy and sometimes that fact is lost in a haze of drinking games and spectacular profanity.

Don’t spend too much time on the plot. There isn’t much of it. Two failed actors, one with an upcoming audition, are tired of their Camden hovel, their dealer mate Danny and London in general so up sticks and borrow a cottage in Penrith from Withnail’s Uncle Monty. Monty is a ludicrously camp alcoholic who is an ex-theatre luvvie and an eye for much younger men. They find the cottage to be little more than a freezing shack wrapped in a gale. Monty pays an unexpected visit for reasons that become clear later and makes the place habitable. There’s some nonsense about a local poacher who has threatened the actors but they settle down to the main agenda of the day; drinking heavily and listening to Monty’s reminisces about his days at Oxford.  During the first night Monty makes a pass at ‘I’ (his actual name is Marwood, as revealed on an envelope) and is rejected. It transpires that Withnail had told his uncle that he was ‘active’ and saw it as a ‘tactical necessity’ in order to secure the cottage in the first place.

A telegram arrives. Marwood has got the part much to Withnail’s chagrin so they return to London (with Withnail eating a roast dinner in the passenger seat) before Marwood leaves Withnail forever for a new, cleaner life. 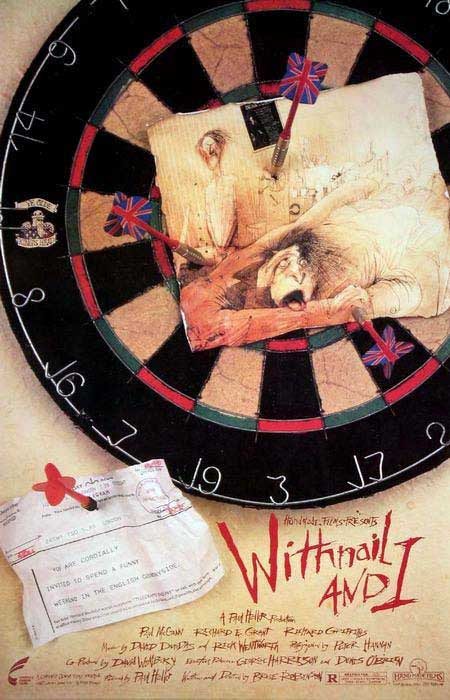 But the plot’s mostly irrelevant anyway. I’ve left out the overdose, Geoff Wode, the sink, Danny and the Coalman, the Irishman, getting up against the radiator, the lighter fluid, Monty’s cat, scrubbers,  the farmer, the bull,  the ‘burglary’, ‘Vim under the sink and both bars on’, Mrs Blennerhasset, the other ‘burglary’, Getinthebackofthevan, the Camberwell Carrot, Presuming Ed and a damned fine Hamlet soliloquy. Like all good comedy, it’s episodic rather than one long joke.

Is it a comedy? Well yes, of course it bloody is, but there are moments of tragedy too. Monty scuttles back to London, rejected and alone, Withnail loses everything when Marwood leaves and, to emphasise the point that his boasting of his talent isn’t just empty posturing, he delivers a piece of Hamlet to a couple of mangy wolves in London Zoo that is mesmerising. His best work saved for no one.  He really had the lot but it’s gone into a sea of booze, pills, anger, selfishness and hate. But mostly booze.

In the original screenplay Bruce Robinson, the author, ended the film with Withnail filling a shotgun with Monty’s finest Chateau Margaux 53 (‘best of the century’) and blowing his brains out but thought that would be too much. Withnail wondering off in the rain, umbrella in one hand, bottle in the other is much better. Perfect even.

If there is a central point to the film it is encapsulated in one of Monty’s pretentious reveries when he announces on a hillside ramble and a lecture on Baudelaire that there can be ‘no true beauty without decay’.  The lads dismiss this aphorism as the product of an alcohol ravaged mind but it’s the main point of the film. Despite a pretty miserable existence of squalor and societal rejection these days are the highlight of Withnail’s life and Monty’s constant stories of his youth, told so joyously, serve only as a reminder that he is paying for them with his lonely retirement. Only Marwood is on an upward curve but he is younger and not so bitter. Or quite so drunk.

It is the fools who are speak sense and not the other way around. Danny, a barely alive drug dealer laments that ‘the greatest decade in the history of mankind is coming to an end and as Presuming Ed has so consistently pointed out, we have failed to paint it black’ or, in non-Danny speak, a golden age is ending and we haven’t done nearly enough. Earlier he says ‘they’re selling hippy wigs in Woolworth’s man’.  The hippie dream is over and it’s for sale now. Or, there can be no true beauty etc…

Withnail is based on Robinson’s friend Vivian MacKerrell who often boasted of great acting skills (two bit parts only) but never exhibited them. A ‘ splenetic wastrel of a fop’ according to actor Michael Feast, he drank himself into an early grave. Robinson gives his fictitious version some acting talent so either he sees things differently or he chose to romanticise the part to emphasise the tragedy. Withnail is certainly not likeable. He’s a coward, a bully and a selfish, greedy man. Why he and Marwood are friends is a mystery as the latter is kind and courteous to all save for cake shop proprietors.

‘Withnail & I’ is also a male tragedy. There are only three women in the film and they never last more than one scene (one only lasts long enough to bite into a fried egg sandwich) and there is little romance in the film save for the heavily unrequited variety. There isn’t even much affection save for the final scene.  It’s mostly abuse and vitriol but that doesn’t detract from its charm.

So why does it work? Well, along with its American cousins, The Big Lebowski and Anchorman it’s eminently quotable. PG Wodehouse tried to fit in three amusing similes to the page but Bruce Robinson beats even that.  Every second line is a gem and not just from the main pairing. Practically every Danny line is hilarious particularly when delivered in a slow and deliberate Hodgsonian drawl – even the way he says ‘Presuming Ed’, just those two words, is fantastic. Then there’s the soundtrack – a mixture of Hendrix and the Beatles (George Harrison being one of the film’s backers) with Dylan thrown in. Then there’s the booze.

The Withnail drinking game has been around for years. The basic premise being that you drink everything that Withnail imbibes – save for the lighter fluid (‘you should never mix your drinks’) unless you fancy going blind for a few days (as did MacKerrell). This amounts to large quantities of gin, cider, wine, non-specific ‘ales’, sherry, whisky and red wine. Not for those who have plans the next day. You can throw in a pork pie and a potato if you want to move onto solids too.

Withnail shouldn’t be a cult film. It shouldn’t be the subject of a few in-the-know people who mutter ‘Monty, you terrible cunt’ before collapsing into fits of giggles. It deserves a wider audience purely for its lightness of touch and timeless quality. Yes, it’s anchored firmly in the late sixties and a post hippy world but when Monty observes ‘we live in land of weather forecasts and breakfasts  that set in, shat on by Tories, shovelled up by Labour and here we are, we three. Perhaps the last island of beauty in the world’ he might be speaking of any age where the new is not welcomed and that’s pretty much any age. ‘Withnail’ is about the end of times and the fear and uncertainty that accompany it. As I said earlier, if you haven’t seen the film none of this will make sense but if this has spiked your curiosity go and have a look at it. It’s a much deeper movie than it first appears.