THE second phase of a special auction to bid for the unique ’96’ jackets worn by Liverpool and Manchester United players is now live for two weeks only – with all proceeds raised going to the Hillsborough Family Support Group (HFSG).

The first phase of the auction was launched before Christmas and raised almost £7,000. There is now another opportunity to bid for these exclusive items and help raise money for the Hillsborough families.

Margaret Aspinall of the HFSG said: “We are delighted with the money raised so far and are thankful to both clubs who donated the jackets to the Hillsborough families.

“It isn’t too late to get one of these iconic jackets so I urge fans from both clubs to bid to help raise much needed funds for the families’ fight for justice.”

Players and fans gave a special message in support of the Hillsborough families prior to the Premier League clash at Anfield in September – supporters held cards that created three mosaics spelling out ‘Truth – Justice – 96’. And Man United and Liverpool players wore jackets which displayed the number 96.

The jackets, as well as the Liverpool black away version worn against Sunderland the previous week, were donated by both clubs to HFSG, with Liverpool players signing their individual tops.

The second phase of the auction started yesterday (Wednesday, February 6) and will end at midnight on Friday, February 16.

Bidding can be accessed on ebay by searching http://myworld.ebay.co.uk/official_hfsg 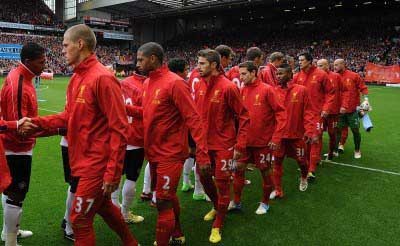