Carra: The end of an era 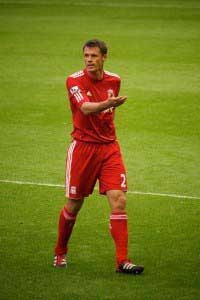 PERHAPS more than any other sport, football is about individual moments. Those snapshots of genius, of madness, of calamity or despair which, taken in isolation, act as a kind of symbolic shorthand for a particular match, a season, sometimes even a career.

Great players are frequently defined by such moments. Think of Maradona. For all the unmatched ball-wizardry, the stunning individual goals and the off-field turbulence, he is most likely to be remembered, in this country at least, for punching the ball into Peter Shilton’s net. Similarly, Paul Gascoigne’s tears in Turin became part of the cultural landscape and ominously signposted the personal struggles that would later envelop him. Closer to home, Kenny Dalglish will forever be frozen in time gleefully hurdling the Wembley hoardings in 1978, his typically sublime chip having secured Liverpool’s second European Cup.

For many Liverpool supporters, Jamie Carragher’s defining moment is inextricably linked to him lying flat on his back, racked with exhaustion and pain. To be slightly more precise, it captures him dredging up every last sinew of determination to overcome that exhaustion and pain in the execution of a perfectly timed, impeccably delivered, last-ditch intervention, denying Andrei Shevchenko the opportunity to mark his Istanbul appearance with the winning goal instead of the abject misery of penalty failure.

In fact, that wonderful night in Istanbul, with its uncertain beginning, expectation-defying recovery and ultimate glorious triumph, provides a handy metaphor for Jamie Carragher’s career.

It is worth remembering that, prior to the commencement of the Benitez reign in 2004, Carragher’s position in the Liverpool team was far from certain. His versatility, which initially saw him occupy a midfield berth before periods in both full-back roles, had become a barrier which served to inhibit and frustrate his progression. To some observers, his obvious qualities – of tenacity, strength and fierce will-to-win – were in danger of being outweighed by his limitations. He lacked pace, they said. He couldn’t pass. As a creative force, he offered little. In short, he came to encapsulate the safety-first, unadventurous approach that characterised Gerard Houllier’s final years in charge.

The fact that he was constantly being asked to plug holes in the starting eleven for the overall benefit of the team, to sacrifice his own advancement as a player for the collective good, was generally overlooked. It was far easier to bemoan Jamie Carragher for what he was not than to recognise his value as the type of player Liverpool would need if we were ever to regain our place amongst the elite.

It was Benitez who gave him the opportunity to prove the doubters wrong. In establishing a Carragher – Hyypia partnership in the centre of the Liverpool defence, Rafa not only ensured that his recast team had the necessary solidity on which his long-term plans relied; he also engineered the kind of individual transformation not seen at Anfield since Bob Paisley re-imagined Ray Kennedy as the most complete left-sided midfield player of his generation.

Within a season, Carragher was being widely recognised as one of the most effective and consistent defenders in Europe. It’s fair to say that, for all the heroics of Gerrard, Garcia and Dudek, it was Carragher’s single-minded defiance above anything else that propelled Liverpool forward to the unimagined heights of Champions League success in 2005.

Think back to his performances in that campaign. To Turin, where his innate leadership and organisational qualities repeatedly dashed the efforts of Juventus to overturn a narrow first-leg deficit. To Anfield, where an increasingly fevered Chelsea onslaught was defied time and time again, by bone-shaking blocks, last-gasp tackles and impeccable interceptions, in perhaps the most unyielding and wilfully obdurate defensive display given by a single player in Liverpool’s long and illustrious history. And to Istanbul, where he recovered from the trauma of conceding three first-half goals to emerge triumphant, ultimately vanquishing the combined triple threat of Shevchenko, Crespo and cramp to confirm his status as a true Liverpool legend.

Equally as impressive, though less obviously headline-grabbing, Carragher maintained that level of performance for much of the next five years. He firmly established himself as the bedrock of the team, cajoling, directing and, when necessary, rebuking those around him and, in the process, became the player that all Liverpool supporters could most readily identify with. You never saw Jamie Carragher splashed across the cover of celebrity gossip sheets. He was never snapped falling out of an exclusive West-End nightclub blinged up to the eyeballs or spotted sharing a cocktail with Peaches Geldof. “We all dream of a team of Carraghers” was more than just a song – it was an expression of solidarity with the values of someone who always remained true to his roots.

In an age where players are increasingly seen as being disconnected from their fan-base, where astronomical transfer fees and obscenely high salaries are accepted as the norm, it is easy to conclude that football is no longer relevant. Take a closer look however, and it becomes clear that, for all the greed, egotism and self-absorption typically on show, isolated pockets of decency remain. Jamie Carragher is a prime example.

Through his ongoing commitment to charitable causes (as illustrated by the formation of his 23 Foundation, set up to benefit local children) and his involvement in a host of community initiatives, Carragher has maintained a measure of integrity and awareness not always apparent in his peers. Both on and off the pitch he evokes all the qualities that Bill Shankly held dear – honesty, dignity, dedication, humility – and there can be no praise greater than that.

And now, after 16 years and more than 700 games, the curtain is coming down on a glorious career. There’ll be no more body-stretching blocks, no more perfectly timed tackles. The Liverpool back-line, for so long Carragher’s personal domain, will look to someone else for direction. He might be 35, with failing powers and legs that won’t always respond as quickly as he would like. But make no mistake, he’ll be missed. Christ, will he be missed.

We will remember Jamie Carragher for all he has accomplished in the service of Liverpool Football Club, for his indomitable work ethic, his unremitting dedication and his insatiable desire to be the very best footballer he could possibly be. And as one of the finest defenders to grace the Anfield turf.

And we will remember that, in Istanbul, for one brief moment he showed us all how to dream.