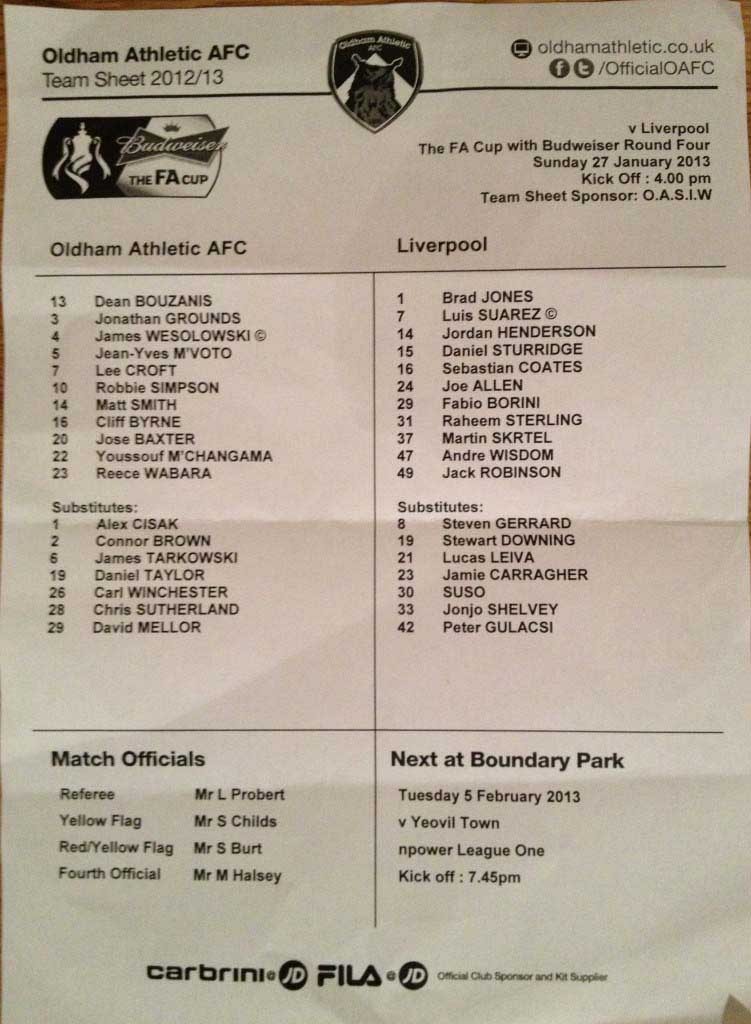 THERE’S not much fancy about Oldham Athletic. A pothole-ridden car park leads to a three-sided ground made up of dilapidated stands and limited facilities that have long since seen better days.

The club would be the first to admit they’ve fallen a long way since they were founder members of the Premier League.

Administration, relegation and penny-pinching are fresher in the memories at Boundary Park than FA Cup finals and a match-day note to ‘members of the press’ said it all: “As you can see the facilities are not what you are used to in the Premier League or even the Championship. Welcome to Real Football!”

The attitude off the pitch was matched on it. Oldham knew what they could and couldn’t do and opted for the methods most likely to glean a result.

Manager Paul Dickov – another from the no-nonsense mould – confirmed the plan after the game:  press hard, get physical – predictable yet highly effective for players earning a few hundred pounds a week and battling to improve upon 19th place in League One.

The challenge facing Liverpool was simple and embodied by the 6ft 6ins frame of Matt Smith, a player plucked from non-league football on a free transfer 18 months ago. The threat he would pose was as obvious to the eye as Oldham’s financial woe.

Yet with just two minutes gone he bullied his way past Sebastian Coates to head the Latics in front after Youssouf M’Changama had crossed from the left.

At 6ft 5ins, Coates looked on paper to be the perfect choice to go head to head with Smith. But on the snow-scarred pitch of Boundary Park the lack of minutes in his legs told.

Before Oldham, the last match the defender had started was at Field Mill three weeks earlier in the FA Cup clash with Mansfield. Before that it was away to Anzhi in November.

Coates was nervy from the off – an unconvincing clearance minutes before the opening goal betraying his mindset. From then it was all downhill for the Uruguayan. His performance was error-strewn and erratic and it was soon clear that Oldham were targeting him as the weak point in an unfamiliar back five.

For the opening quarter of an hour, it was all Oldham with Lee Croft firing in a shot spilled by Brad Jones and Smith trying his luck from distance. Raheem Sterling went into the book for a tackle from behind on M’Changama and was later lucky not to see red for a tug on Jean-Yves M’Voto.

Sterling’s exuberance aside, the pointers that have echoed around football changing rooms for eternity were simply being ignored – Liverpool did not, or could not, match aggression with aggression.

Fortunately, Luis Suarez, captaining the side for the first time, cares little for the pattern of a game. And the first opportunity he had to run at the Oldham defence led to an unlikely equaliser on 17 minutes.

Picking the ball up in his own half, Suarez ran virtually unchallenged before attempting to find Daniel Sturridge with a pass on the edge of the area. Instead the ball bounced back off Cliff Byrne and Suarez coolly finished for his 21st goal of the season sparking smokebombs and fireworks from the 2,700 fans in the away end.

The goal stirred Liverpool and briefly Oldham lost sight of the battle plan. Suarez again had the ball in the net but was ruled offside when he headed in Henderson’s free kick, while a slick move that saw Borini, Suarez and Sterling combine ended with the teenager placing his shot too close to Dean Bouzanis in the Oldham goal.

But Liverpool’s susceptibility at the back soon remerged as Oldham began to again snap into tackles and press the ball with eagerness. Smith poached his second just before half-time after Brad Jones – unconvincing throughout – spilled a cross from Wabara.

With Liverpool staring at the humiliation of crashing out of the FA Cup to third-tier opposition for the first time since losing to Bolton in 1993, it was baffling that Rodgers did not opt to shake things up at half time.

And the break clearly did nothing for Liverpool’s fragile mentality as Oldham simply picked up where they left off.

After the disappointing Borini fluffed a great chance to level things from inside the area, Jones was soon picking the ball out of the net again after Carl Winchester was allowed too much time to cross from the left and Wabara out-jumped Robinson to loop in Oldham’s third.

Rodgers reacted by introducing Gerrard and Stewart Downing and while that provided some much-needed impetus, Liverpool then faced exactly the determined and dogged defending that had been so lacking at the other end of the pitch.

Joe Allen’s deflected shot with 11 minutes remaining brought with it hopes of an unlikely replay and Gerrard was an inch away from again pulling off his Superman act as his 30-yard thunderbolt cannoned off the bar.

But even six minutes of stoppage time couldn’t save Liverpool and so began a post-mortem that will be plastered across every back page come Monday morning.

A stern-faced Rodgers later pointed the finger at the younger players.

“I was bitterly disappointed with the young players as they had a chance to compete for a club that has to challenge for trophies,” he said.

The manager also questioned the intensity of Liverpool’s play and the lack of pressing.

While it was true that few players could count their performance as one of their best, Rodgers must also face criticism.

It was the manager that made six changes, selected two teenage full backs and a centre back lacking game time. Given the physical nature of the game, Joe Allen’s selection also puzzled.

Rodgers must also face scrutiny over his reticence to change the approach despite the obvious problems posed by Oldham from the first minute.

Now Liverpool will again endure crisis talk. That the hashtag #rodgersout trended in Liverpool on Twitter after the match is probably more indicative of the modern football fan than any serious mass revolt against the manager.

But it’s also a sign that while the FA Cup might not matter to the bean-counters, it matters to supporters.  Just ask Oldham.