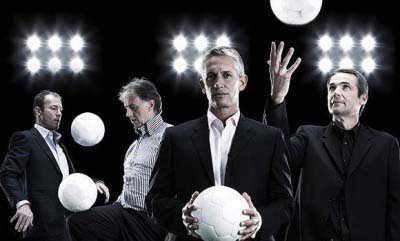 I DON’T know what Alan Hansen thinks about football. I mean, I know he’s in favour of power and pace, and most definitely against terrible defending, but I don’t know what a team that Alan Hansen can get behind looks like. I don’t know how it approaches the game, what shape it plays, what values it cherishes, what decisions it makes. This is odd. Allowing 15 minutes a week for 46 weeks a year over 17 years then I’ve heard Hansen talk football for 195.5 hours in my lifetime. And I still don’t know what he really thinks about football.

For a while now we’ve been approaching a point where the way the game is presented and discussed on television and radio, and the way in which it is discussed online, on podcasts and in other fan-produced media, couldn’t be more different.

I’m biased, obviously, but there just appears to be a great deal more reason, discussion and humour on our side of the fence than on theirs.

Euro 2012 on the BBC laid this difference bare. It was a catalogue of infuriating, pointless nonsense.

Some quick lowlights – Martin Keown saying at the start of Spain’s extra-time against Portugal that “Spain don’t seem to want it enough”; Mark Bright’s pathetic remark as Croatia throw the goalkeeper forward in their game against Spain of “It’s last minute dot com now.”

Then there was Keown’s basic dismissal of the Germans as being “arrogant” and the Italians as “passionate” after the semi-final.

Oh and everything that comes out of Lawrenson’s mouth – snide, miserable squeaks of ignorance. Murray, Savage, Shearer. Everyone’s depiction of Mario Balotelli through the tournament, especially after he’d played an important role for the side that won the league.

Homework just didn’t appear to have been done. Keown said the Portugal keeper “appears to be good” during the semi-final against Spain; Shearer tells us that “Lewandowski could be the player everyone said he was” during the first game.

Have neither of you watched them before? Why not? This is your job. You get paid to do this. You can watch football in the morning and play golf in the afternoon. You have researchers to call on, you can get DVDs of sides at the drop of a hat. It’s staggering that any driven professional would feel as though simply turning up and cracking a few basic jokes, turning out the same guff is enough.

But it is. And it has been for far too long.

This is the BBC’s problem. Institutional smugness. Everyone involved, with the honourable exception of Lee Dixon, seems far too satisfied with themselves.

It needs to be torn out root and branch. Quite possibly harsh on the talented Lineker who deserves a career presenting other sports but it should start there.

Hansen, Bright, Keown, Lawrenson, Shearer, Crookes and Murray all need to be shown the door. The belief that they are unsackable is part of the problem.

The feeling persists that this smug attitudepermeates from those who produce and oversee BBC’s football coverage – they put Chris Moyles and his sidekick on the red button to commentate on an England game despite them making clear for over ten years they most definitely have no idea when it comes to football.

The higher you go in the BBC hierarchy the more you suspect it is worse than smug. They don’t really respect the viewer, they don’t feel he/she is discerning. They will just keep giving us Hansen’s golf club bilge or Moyles’ loutish shouting rather than educate, inform or entertain.

Their Euro 2012 coverage is the culmination of what has been atrocious broadcasting on football across the BBC for some time.

Match Of The Day offers you no sense of the flow of any of the games it covers, heaping talking point atop talking point until there is nothing to say.

Their radio phone-ins are as witless as Bright and Keown. Dreadful callers are cued up to complain one after the other (Mark Pougatch had one calling for Wenger’s head after Arsenal got murdered by AC Milan. In the same call the listener also said that Mancini and Ferguson should have been sacked. He went unchallenged on all this and was praised for his tough views that were, as far as Pougatch was concerned, difficult to disagree with on the call’s conclusion).

Alan Green is the archetypal misery guts commentator who doesn’t want to be there. The Monday Night Club is the repository of the braindead with the likes of Claridge, McGarry and Motson chewing over non-existent fat and spitting it in the face of the listener. Motson has never had anything interesting to say about football and now says it more than ever. 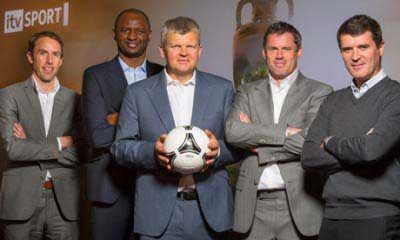 Over on ITV, however, their coverage has shown signs of something. Not of being actually good, but like it might just know what good looks like. Keane, Carragher, Martinez, Strachan, Vieira. All look capable of talking about football without being abhorrent and as though they enjoy the activity. They are up against the clock, with endless adverts and England packages but it does look enjoyable. Incredibly they are managing this with an enormous One Show dead weight on their backs.

Of course for Chiles, it’s all vaudeville. It’s end of the pier stuff. And the second things get really interesting, he stamps it down.

Keane is incensed by Ireland’s capitulation to Italy and the cultural memes that follow about the Irish. He’s furious with Keith Andrews. He is incendiary. It is glorious and unguarded. It is television. But Chiles doesn’t probe Roy’s thinking. He doesn’t challenge him or urge him to explain. He goes to others on the panel to get their view on how good Spain are (very, by the way).

The journalistic thing to do in that moment was to get Keane to speak more. It was also the most entertaining thing to do. Whether he’s right or wrong, Roy Keane needed to be given the whole time up to the break to cut loose. Instead he was shackled.

Carragher has been the most interesting on ITV. In his own way he’s been as revelatory as Gary Neville has on Sky.

What Neville has done at Sky is show what a clear thinking, hard-working one-man-band can do. While perpetually sensible, Carragher isn’t doing that.

Indeed at times he seems a little contradictory and not as clear in either his thinking or explanation as Neville. No matter for him, because what he’s done on ITV is to try to engage his fellow panellists, try to disagree with them, try to get their attention. Carragher wants a discussion. He wants an exchange of views.

This is what the future looks like. Get them in a circle, get them disagreeing and get an actual grown-up journalist to front it, to guide it. Let’s intrude on a conversation. Let’s imagine that if this lot were watching the match socially then this is what they’d say.

If Carragher wants to speak to Martinez, let him. If Keane wants to go ballistic then let him but have Vieira challenge him. The host can guide this discussion. He doesn’t have to be funny – or rather he shouldn’t try to be funny – he doesn’t have to make puns, he has to have the ability to guide the footballing egos. He has to be able to stop it from lapsing into the realm of the dreaded smugness and instead help them help us to learn a little more about the game.

Let me pitch something. BBC, 7:30pm. Television on. Intro from a host with journalistic credentials for Poland vs. Russia. Cut to three minutes with a video package narrated by Lee Dixon (or possibly even tactical guru Michael Cox) about what to expect from Poland’s approach – the sort of thing we see a thousand times in golf or cricket coverage.

Cut back to studio where engaged former players discuss what Dixon has put together. Then the same for Russia, a look at a couple of players and how they operate. Ideally some wit. Anthems and game.

No co-commentator but an analyst for the main commentator to call on when there is a break in play or when the game is flat. Let him speak for over a minute about a point rather than have to chip in immediate comments or what they believe passes for humour.

We don’t need a double act and we shouldn’t need this sort of analysis for more than three times a half. Let the game breathe. Back to half-time, further analysis, something on a home nation’s preparations for whatever game is coming next. More game, a summing up, thank you and good night.

This isn’t complicated or expensive. Good people, putting a stint in. Get the right blend and you get rid of the witless banter. Get people who work, who do a full day, who think about it and enjoy it.

And all this matters. It matters because the casual supporter does have sway and because the way a nation talks about its football, the way it perceives its football, matters in terms of the football it plays. There is a reason why the Italians, Germans, Spanish all play better football than England and one of those reasons is that Vialli, Seedorf and Klinsmann are able to drop into BBC studios and speak far more sense than Shearer, Hansen and Lineker in their second language.

They don’t need to be “right” all the time. This isn’t about “being right”. “Being right” in a discussion is one of the most overrated things to be. If “being right” is your aim then get in among it with bookmakers.

What we see on BBC television and hear on BBC radio doesn’t get anywhere near approaching an investigative, explorative discourse – there is no exchange of ideas with warmth and enthusiasm. It is belches and groans and back-slapping. It is everything that is wrong with English football. And given the potential quality that is about the place, it is a genuine shame.