THE STADIUM ISSUE – A PAIN IN THE ARPS

A LITTLE over a fortnight ago, we published an email we received from Liverpool’s principal owner John W Henry in which he detailed why he thinks that a new stadium or even a current stadium redevelopment isn’t necessarily key to the club’s future.

Such a well written, direct communication to the fans from Mr Henry was a refreshing step for a football club owner and should be hugely respected, applauded and welcomed in equal measure, but it also doesn’t not exempt him or FSG as a whole from a critical eye or from questions that need answers.

Contained within the missive, and key to his argument, Mr Henry argued that “it is a myth that stadium issues are going to magically transform LFC’s fortunes” and produced a table (below) that was used to support his argument. 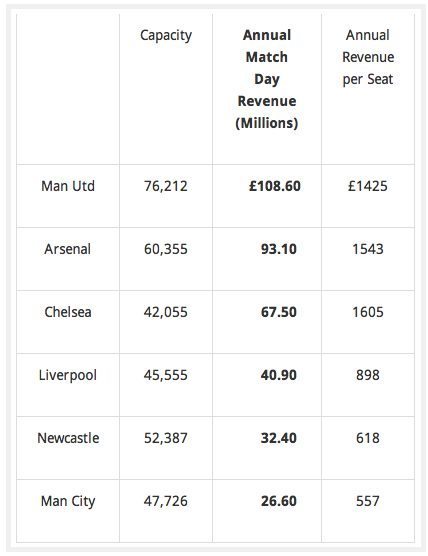 Noting the disparity in figures in the Annual Revenue per Seat, Henry stated “Can Liverpool as a community afford Chelsea or Arsenal prices? No.”

“It is often said that for Liverpool to compete in match-day revenue with United, Arsenal and Chelsea, we need a new stadium.  But you can see that the £50 or £60 million differences stem as much from revenue per seat as from the number of seats.

“If Anfield yielded £1550 per seat, without adding seats, LFC match-day revenue would rise from £41M to £71M.  That would be the same as building a new stadium with 60,000 seats or increasing seating at Anfield and increasing revenue per seat to £1170.”

On the surface of it, this is a credible argument, but not one without flaws. The facts and figures used in the argument are quite deliberate and, in some respects, give the casual observer the wrong impression and these holes in the discussion are the ones that require further analysis.

First, the big figure, the Annual Revenue per Seat (ARPS). Whilst Mr Henry might be right about the community in Liverpool being less affluent than the surrounding communities around Chelsea and Arsenal, he failed to explain, if local economics is the primary driver in ARPS, why can Manchester United manage to achieve £1425 per seat, taking their total annual match day revenue to £108.6m, £15.5m ahead of the supposed affluent Arsenal.

Further, if it all about the cost of season tickets and local economics, it’s interesting to note that out of the four teams mentioned, only Arsenal have a more expensive ‘cheapest’ season ticket than Liverpool.

Surely, the demographic of the average match going Liverpool fan and the average Manchester United fan aren’t that dissimilar that they can achieve an extra £527 per seat than at Anfield, especially given the recent near parity in the clubs’ last two sponsorship and kit deals?

What are they doing that we aren’t and can it be addressed?

What isn’t clear from the figures available is what proportion of the ARPS is down to corporate spend, but if that spend is a significant factor then does it not strengthen the argument for a new or significantly refurbished stadium?

Further in his email, Mr Henry suggests that LFC’s growth will be:

I’m also not convinced that the club can merely replace the increased revenue that a new stadium would bring by commercial deals alone, given that the commercial arm is one area of the club that is doing fantastically well, generating £77m in the last accounts. You do wonder how much more room to grow we have, and given that Manchester United, despite their worldwide presence and recent success only generated £103m, whether any increase is ever going to be enough to compensate for massively lower gate receipts.

I think it’s hasty and imprudent to assume Champions League participation without a massive capital injection on the playing side whilst also trying to keep a lid on our 73% wages to turnover ratio, which is no mean feat.

I also don’t see why, as the impression was given in the email, that commercial expansion, Champions League participation and a new stadium build have to mutually exclusive of each other.

Another interesting quirk is the now oft-quoted figure of a 60,000 capacity facility and its relatively minor impact on the balance sheet after bearing the cost of any debt accrued to fund the development.

Using the club’s own figures and given the waiting list before the recent audit was over 70,000, even assuming a post audit conservative take up of 50% which would take the number of season tickets from around 25,000 up to 60,000 alone, whichs sounds not dissimilar to Manchester United, Spurs and Arsenal.

By aiming a bit higher, being a bit more ambitious and going for a 65,000+ facility could the club not conceivably offer a more varied ‘menu’ of tickets which, alongside the improved facilities that a new stadium would bring, would not only raise the all important ARPS but also potentially give the club the opportunity to offer cheaper season tickets to those who either do not want or cannot afford all the bells and whistles?

Let’s just assume that, given LFC’s saturation point from a capacity perspective, the potential for regeneration in the area allied to the demand for tickets LFC could stretch to the relatively conservative ARPS figure of £1200, then a 65,000 capacity stadium would yield £78m per year, an increase of £38m or 47% on the 10/11 figures.

Even with an increased build cost for a 65,000 capacity, with some intelligent financing arrangements and a front loaded naming rights deal, the growth on match day revenues would easily cover the cost of the project.

The other option, which FSG have also seemed to have quietly dismissed is the redevelopment of Anfield, which would also prove financially and logistically difficult given that they’d not get a naming rights deal of any value for an existing build, they’d have to close at least one, possibly two stands during the rebuild thus reducing Anfield’s capacity significantly for a long period, as well as considerable secondary income that a new stadium development would bring.

The third option, which seems to be the most likely, is that we do nothing but give Anfield a lick of paint, this is unacceptable insofar as ultimately, the long term good of the club needs a new or massively improved facility befitting of the name and history of the club, notwithstanding the long term stagnation of the area for which the club is partly responsible.

The fourth option, which on further reading given the wording of the email, is a publicly funded or part funded facility which would only mean one thing, the dreaded ground share, and if that is what the club is leaning towards then they have a responsibility to address the issue and be honest with the fan-base, rather than skirt around the matter and pretend we won’t notice.

I’d like to think that the sincerity in which Mr Henry comes across with a ground share isn’t what he is driving at, and it’s the paranoid delusions of a fan who, like many others, have been waiting for a definitive answer for far too long.

Despite my applause for Mr Henry’s email, I do not believe that his assertions on the economics stand serious scrutiny. It is difficult not to reach the conclusion that the email was a coded message that FSG have no material investment money at thier disposal either from existing or potential new investors.

If that is true, LFC are at risk of prolonged period of more stagnation, an empty trophy cabinet, a very disillusioned fan base and continuing blight of the Anfield area. And if that is also true, Mr Henry and his co-investors will bear some of the heavy responsibility (along with a lethargic city council) for yet more years of inaction.

Facts and figures shamelessly lifted from the Guardian, the ever impressive @SwissRamble and@andersred Any mistakes will be mine.