BORINI: Wheels in motion and a new cog in place

FEW sides in the world are able to financially boss their way into winning. At the moment, only Man City, Chelsea, and Manchester United have distinguished themselves as clubs who are poised to do so.

So, what are the “other” clubs left to do in such situations? Well, if we are to judge by the most surprising success stories in recent memory ( e.g. Borussia Dortmund, Newcastle, etc.) then there is only one conclusion. If you cannot outspend your opponents, you outsmart them. You become better at recruiting, better at negotiating, and better at constructing a squad consisting of complementing components. Time will tell whether Liverpool will be able to accomplish these things, but the first signing of the Brendan Rodgers era shows an appreciation of the aforementioned notion as the club has recruited a young Italian international, for a relatively modest fee, into a team whose style of play matches his skills. 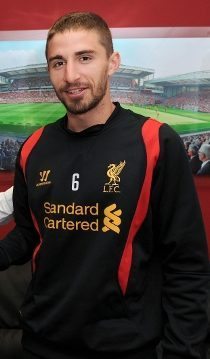 For those who at this point are, inevitably, clamoring to know “what exactly are his skills!?” understand that, in regards to how he will benefit Liverpool, there are two ways in describing Fabio Borini, one straightforward and one complex. The young Italian is not the fastest kid on the pitch but quick on his feet and can score with both. He is not the strongest, but does have the ability to maintain balance and bounce of tackles. Winning aerial duels at Anfield won’t be his game, but outmaneuvering defenders. This, in a nutshell, is who Fabio Borini is. However, it is not necessarily Borini’s attributes that are most important in considering how a Liverpool side will look with him in it, rather the manner in which the player approaches the games and his resulting tendencies. This is where the complexity comes into play.

At Roma, in a side that was intended to press, pass, and move as much as Rodgers’ teams generally do, Borini was not only used as an out-and-out striker, but was also employed on both wings. No matter the starting position however, Borini was always sure to be involved in midfield proceedings. Whether he is on the flanks or straight up the middle, Borini tends to track back and make up the numbers in midfield in order to ensure or, in some cases, win back possession. The Italian also likes to run the channels a bit, and will get into any open space in that is vacated when play has progressed to the final third, while he, perhaps most important, has a knack for splitting and making runs in behind defenders. So, what does all this mean for Liverpool? The answer is, quite frankly, a lot.

“All this” means that in a system which places emphasis on possession and precision in attack, on passing, passing, passing and then knowing when to penetrate, Liverpool have a player who not only values those aspects of the game, but whose skills lend themselves to accomplishing the overall goal of Brendan Rodgers’ tactics. For when a team passes as much as the current manager likes to, such as Spain (the obvious and inevitable comparison), the ultimate objective is to grind teams down, test their commitment to discipline, and distort the opposition’s shape, at which point the killer pass and finishing touch are both made possible. At times, starting positions may be rendered irrelevant, and it could be the overall flow of the game that dictates where a particular player may be at any given time, but the principles will remain the same. Press the ball, keep the ball, and make the runs. With such strategic aspirations in mind, it’s important to have players of Borini’s ilk in the squad, players who can drop into midfield and move the ball quickly whilst also having the nous that makes those defense-splitting runs second nature.

With all that being said, the expectations that can be had in regards to Liverpool’s newest signing are quite simple. First and foremost, Fabio Borini will complement Luis Suarez and the two may become interchangeable. Both are comfortable playing centrally and on the right, and both are comfortable with filling in gaps that could be left by the other and making interchanging runs. If Suarez plays centrally and drifts to either side, as he normally does during matches, Borini is a good bet to do the sensible thing and provide an option in the 18-yard area for the Uruguayan, something that wasn’t always a given during the last campaign. If Borini plays centrally himself, he has the ability and the positional acumen, in making runs beyond the defense, to feed of the success and timing of his midfielders, while he is also the type of forward who will come in handy when a third man is needed to try and play the type of triangles that Swansea played all over the park at Anfield last season.

Fabio Borini is by no means a superstar, nor is he a player whose talent is so immense that he could slot into any side in the world. As a striker, perhaps he would struggle to get in a side that was more about power and pace than a team whose success was predicated upon finesse. Such things, however, do not matter when the fit is right for a player. And at Liverpool, under a manager he’s worked with, and in a style that suits his abilities, the fit for Borini is certainly right. In purchasing the, now, former Roma player, Liverpool have gotten a fine component made for a system that is intended to run like a well-oiled machine. The club might just do well to sign others like him.