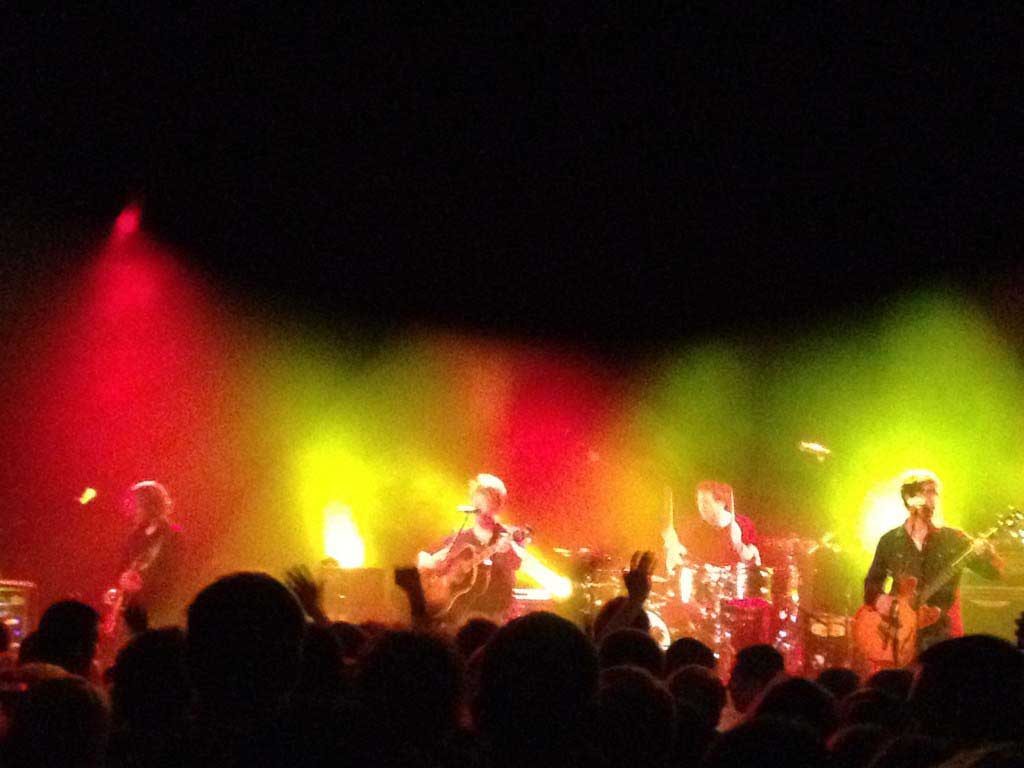 Best I could do with my phone...

IT’S easy to get cynical about comebacks in music. The oft-thrown mud is that these rhythmic reunions recur merely to boost bank balances.

In some cases, it’s hard to argue against that stance (hello, Shaun Ryder). But for Cast it looks like it means much more than just a few extra quid in the coffers for a new set of nashers.

And it’s 10 years since the band split on the back of what looked to be their last album, the disappointing Beetroot.

Since then, frontman John Power has released three albums Happening For Love, Willow She Weeps and Stormbreaker and has long since shaken off the lazy assumption that he was the Sammy Lee of music (a better number two than a frontman) following his deadly double act with Lee Mavers in The La’s.

With those solo records in mind, it never felt like Power had to reform Cast – more that the group collectively wanted to.

That’s reflected in the performance here. There’s no flicker of boredom or signs of going through the motions. Instead, there’s a real spark – the tunes still set toes tapping, Power’s voice is as strong as ever and the live performance is as tight as it was back in the band’s heyday.

Inevitably, the set is laced with the hits to leave clutches of 30-somethings pogo-sticking around Mountford Hall to Fine Time, Alright, Sandstorm, Guiding Star and more.

But this isn’t a greatest hits tour. And the new tunes from fifth album Troubled Times, their first long player in ten years released in March, stand up to scrutiny, too (although, sadly, it’s quite clear many in the room have never heard them before).

Beetroot this album isn’t. Instead, it’s the sound of a bunch of Scouse lads doing what they’re good at – producing top-quality guitar pop. Simple. It’s calmer, more rootsy, less-power pop than their trademark stuff. But it’s no bad thing.

The album was funded by PledgeMusic – basically a platform formed by music-lovers to allow artists to get material out to fans who ‘pledge’ to make the music happen. It cuts out the major players in music and a slice of the dosh goes to charity, too. Which can’t be bad.

Cast have always got up the noses of the stuffy musicial snobs – but who cares? Some of the same people that have again been knocking the band will no doubt salivate over ‘baroque pop’ like Antony and The Johnsons or force their ears through a record just because it’s ‘cool’.

Each to their own. Cast do what they do. And they do it well. They like it, we like it – where’s the harm?

There’s certainly no doubt the crowd was entertained here with the highlights including a wonderful set-closing drum solo from the Keith Moon-esque drummer Keith O’Neill after the fret-board tapping frenzy that is History from the talented lead guitarist Skin Tyson.

The anthemic See That Girl is also a triumph – an earworm of a track that will live long in the brains of all who watched this.

Let’s not kid ourselves – everyone’s cracking on a bit – most of the audience and the band itself – and it will be interesting to see what the next step for Power and co is.

But this didn’t feel like a goodbye. It was a reunion with a difference. It felt fresh. Live or on record, Cast are still a band worth investing in. As for those that revel in disparaging the group, well don’t you think life would be a little drab if we had the same thoughts?