STICK OR TWIST? A LESSON FROM HISTORY

THERE’s a lot of gleeful handrubbing and told-you-sos flying around at the moment.

Journalists that said Kenny Dalglish should never have been given a second chance are nodding sagely and grinning with delight…even the one who wanted Jamie Carragher to get the job.

Rival fans are appearing from the woodwork, inactive social networking accounts are creaking into life again and (foam semi-final) fingers are being pointed.

A lot of people who have got nothing to do with Liverpool want a Liverpool legend ousted.

Some Liverpool fans want him gone, too.

But there’s perhaps a lesson to be learned from 30-odd miles down the road when it comes to deciding whether to stick or twist with Dalglish.

Every aspect of Liverpool was top class. In the 10 years before Dalglish moved into the manager’s office the club had won the league seven times.

John Henry has been known to swot up on football past and present and by now he will surely know just how much the club has fallen behind the leading pack.

Revenue-wise, wage-paying-wise, stadium-size wise, Liverpool is not top of the pile.

Clearly that’s not the case in the league either – and come the end of a season, it won’t have been the case since 1990 – 22 long years.

But the year Liverpool were last crowned champions was also the year Alex Ferguson almost lost his job.

Ferguson had spent big and expectations were high. Manchester United kicked off hoping, expecting, that for the first time since 1967 – 23 long years – they would win the league.

United had broken the British record for a defender with the purchase of Gary Pallister at £2.3million while deals for Danny Wallace (£1.2m), Neil Webb (£1.5m) and Paul Ince (£1.7m) were hardly cut price either.

The Pallister deal was in fact the second highest fee paid by a British club at the time. The biggest was by Liverpool to bring back Ian Rush from Juventus.

Ferguson had also tried to lure Glenn Hysen to Old Trafford but lost out – to Liverpool.

He still made a total of 10 signings that season as he tried to end years of underachievement in the league.

But while Liverpool won the title, as per usual back then, United slumped to 13th, their lowest league finish since their relegation from the First Division 15 years earlier.

Ferguson came under immense pressure with even the United fans turning on him – one producing the infamous banner: ‘3 years of excuses and it’s still crap – ta ra Fergie’. 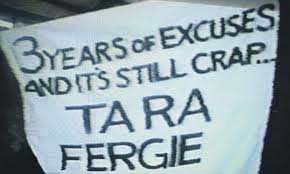 When that banner was unfurled at Old Trafford in 1989 it was met by “loud, spontaneous and brutal cheers” according to a Guardian article by Daniel Taylor (and the doyen would know).

Taylor interviewed the fan responsible for the banner, Pete Molyneux, who said: “It was a build up of all the frustrations because his first three years were dark times. Liverpool were running away with everything and we didn’t seem to be getting any closer.

“We were coming off the back of the failures of Dave Sexton and Ron Atkinson to win the league and I just felt the fans had to do something because the club was accepting second-best.”

As it was, Ferguson’s side went on to win the FA Cup that season after a replay, beating underwhelming opposition in Crystal Palace, who had never reached a final before.

It was United’s first trophy in five years, and Ferguson’s first as manager of the club (he was appointed in November 1986).

But the point is that it is only modern football that decrees managers must be moved on at the first sign of crisis – it never used to be the case.

Managers were given time – especially at Liverpool.

Ah, you might say, well what about Roy Hodgson? Seriously, what about him? It really shouldn’t need to be said but Kenny Dalglish is not Roy Hodgson.

One season of ups and downs, a few bad buys and a poor league performance doesn’t whitewash everything that has come before.

Liverpool fans are now being mocked for calling him ‘King’ but Dalglish is the greatest living legend associated with Liverpool Football Club – a man who has experienced the highs of European Cup glory and the lows of Hillsborough and emerged the other side revered and with a lot of credit in the bank.

Let’s not forget that Dalglish is where he is right now because he answered the call of the club he loves in its hour of need. The easy choice was to keep on cruising – literally.

Hodgson, on the other hand, was the pick of a banker and it showed. He was way out of his depth.

Kenny clocked up eight league titles as a Liverpool player and manager and won the European Cup three times as a Red.

Hodgson didn’t manage to break into the Crystal Palace first team before playing for a string of non-league clubs. He’s managed 16 teams in eight countries, winning the league in Sweden and Denmark.

Unwanted records are being racked up in the league right now but that visibly hurts Dalglish.

In similar situations Hodgson embraced the mediocrity. This was Liverpool’s level and it wasn’t his fault, was the message. Remember ‘formidable’ Northampton?

And the football? Well for all the faults of the current side, at least they try to play the right way.

It sounds like straw-clutching but anyone who watches Liverpool regularly will tell you the football – in the main – has been better than the results suggest.

Under Hodgson, results were deserved. The football was turgid, defensively-minded and one-dimensional. He left the club with a win percentage of 41 per cent. Dalglish sits at 47 per cent for his second stint as manager (it was an amazing 60 per cent the first time around).

This season, Liverpool have often lacked direction – they’ve looked fragile, short on ideas and inspiration and devoid of a leader or two. There’s not enough character in the side right now.

But on the other hand they’ve defeated Arsenal, Chelsea (twice), Manchester United and Manchester City.

They’ve won a cup, ending a six-year trophy drought in the process, and they’re in the semi of the FA Cup.

This side might be clueless but its capable. It’s been good and bad for Liverpool this season.

Dalglish could still turn this around, so why change it?

If he genuinely doesn’t believe he can do any more for the club come the summer I believe he would walk away – he wants what is best for Liverpool.

As he said the first time around: “I would be the first to realise if I wasn’t good enough and then I would confront it.”

Does the club really want to go down the road of a fourth manager in two years if it can be avoided?

And if it does when does that policy stop? It’s an expensive and unsustainable approach – after all, Liverpool doesn’t have Roman Abramovich sitting in the boardroom to soak up the pay-offs.

Dalglish has been in charge for 15 months and 65 games. Every manager Liverpool has ever had bar Hodgson was afforded more time.

Going back to Ferguson in the 89-90 season, Martin Edwards at the time was said to be seriously considering sacking Ferguson, although he was worried about United becoming ‘a sacking club’.

The directors were also reported to have recognised the reasons for the slump – with injuries top of the mitigating circumstances.

It’s just one of the reasons Dalglish could cite for this season’s league performances.

Lucas, Glen Johnson, Steven Gerrard, Daniel Agger – all have missed significant numbers of games. In the case of Lucas and Agger in particular, their influence on team performance is huge.

Then there was the Luis Suarez sideshow. Dalglish handled it badly. So did the rest of the club. But in pure football terms it robbed the manager of his most effective attacker – and Suarez has never been the same again since.

The summer signings largely haven’t worked – that can’t be ignored. Andy Carroll, too, still has a lot to prove.

But they’re capable of more. There are players in there – we’ve seen it.

A new manager would call for new players. A new system. Liverpool would be back to square one.

And who would that manager be? There’d be candidates, of course there would be. But what would the calibre of them be?

It was the pulling power of the club – or rather the lack of it – that prompted Dalglish to put himself forward for the job in the first place.

Is Liverpool any more attractive a proposition now? There’s still no stadium. There’s still no Chelsea or Man City-esque pot of gold to spend and there will be no place in the Champions League next season to tempt the top players. Talk of Jose Mourinho is fanciful for many reasons, not least for expecting an ego like that to work with a director of football.

The blood is still being wiped from the walls of Anfield from the messy battle to rid the club of Tom Hicks and George Gillett.

World-class talent was replaced with lesser replacements. The pendulum is yet to swing back the other way. That will be the same whoever is in charge in the dugout.

And does starting again under a new manager minus a big budget make any sense at all?

Perhaps a master tactician could come in, drill the current squad and offer a more results-orientated approach to matters – points first, performances second.

But Liverpool have had such managers in Gerard Houllier and Rafa Benitez. People still moaned and the media still sniped.

Perhaps instead of championing change expectations should be reeled in and tolerance extended to a man who has won the top division four times.

Top four this season – or even higher – always seemed ambitious after what had come before. The turnover over of players has been huge, so it was always a big ask, particularly with an aim to lower wages and without the lure of Europe.

Other teams looked better equipped and further developed from day one – so it has proved, although the Liverpool squad has clearly underachieved while the summer signings have largely failed.

The smart buys of Newcastle that contributed to the latest setback only served as a painful reminder of what can happen when money is spent wisely.

Dalglish and Damien Comolli need to learn the lessons from the last few windows – that’s if they are given the chance.

But whatever happens, whoever leads the team, Liverpool will face the same problems.

Liverpool is still deemed a big club, but now it’s for its history and its support. It’s not the first-choice destination for players, it’s not offering the biggest wages and it plays in an ageing ground that is dwarfed by those of rival clubs.

Now, if Manchester United and Liverpool chase the same player the player goes to Old Trafford. Ashley Young and Phil Jones are testimony to that fact – the boot has long been on the other foot.

Ferguson did. Perhaps Kenny can. While that possibility remains it’s a chance worth taking.