Basque-ing in the glory

Athletic Bilbao left the football purists purring with a brilliant away win at you know where tonight. It seemed like a good time to post this…

THERE’S nothing better in football than watching a team which typifies the city it represents.

The overt ostentation of Milan is replicated perfectly by the star-studded AC Milan foursome of Ibrahimovic, Robinho, Pato and Cassano.

With hundreds of bars and shopping centres, the efficiency of Barcelona’s Barri Gotic is matched only by its beauty – something Messi, Xavi et al, with three La Liga titles and two Champions League wins under Pep Guardiola, combine with near perfection.

Even the rough and tumble of Stoke City is reminiscent of Stoke-on-Trent’s city centre on a Saturday night, with most of the doormen looking like Robert Huth or Wilson Palacios.

But there’s no team that reflects their city’s culture more than Athletic Bilbao, the team who adopts a cantera policy of playing Basque natives only.

Whether they win, lose or draw, they do it without compromising their identity. When Fernando Llorente was derided as a gangly, misfiring 19-year-old, it was done so because he was one of their own.

Now, as a top international striker with European giants tracking him, the pride is multiplied because he is one of their own.

Pride in their heritage is paramount.

Upon both the stadium and club crest is the city’s most famous church, the San Mames.

The players who put on the shirt of Athletic Bilbao don’t simply represent the football club – they represent the city, the people who inhabit it, and the philosophy they strive to maintain.

San Memes still provides the people of Bilbao a place to worship, albeit to a diff erent deity. The club really is that important to the people.

Barcelona might be more than a club but for Athletic, it is more than life itself – and Athletic have given life to La Liga over the past few years.

When watching Spanish football, most casual eyes cast a cursory glance upon Barcelona and Real Madrid – with good reason too, given the abundance of talent.

Each twist of the kaleidoscope reveals more magic from Messi and class from Cristiano Ronaldo. But as those two teams battle for honours, Athletic are enjoying one of their more fruitful periods away from the spotlight’s glare.

The production line is in full operation, full steam ahead; the golden goose is laying golden Basque eggs for Los Leones.

Llorente leads the team, flanked by a group of talented youngsters;19-year-old wide man Iker Muniain and 21-yearold Javi Martinez being the most coveted across Europe.

The trio, along with players such as Toquero, Amorebieta, Mikel San Jose and de Marcos, have steadily progressed the club up the table. From eighth to sixth in the previous two years; experienced coach Joaquin Caparros looked set to for a push for a top four spot this season.

So what happens when the new club president decides to sack the coach halfway through that narrative and employs an eccentric Argentinean tactician nicknamed Loco?

When Josu Urrutia won Athletic’s election, he tore up the script, manual and holy scripture in San Memes.

Joaquin Caparros; passionate, astute and softly-spoken, was too defensive for Athletic. A Europa League berth had been achieved, but not with the desired football.

In his place: Marcelo Bielsa.

The 56-year-old was last seen in South Africa with his ten-man Chile playing six up front against Spain in order to avoid a last-16 clash with Brazil.

Bielsa is a non-conformist; but it’s the non-conformity that has made him one of the most loved coaches in world football.

His Chile side lit up the World Cup with their attacking formation, showcasing the finer talents of Aleixs Sanchez and Gary Medel while getting the best out of mediocre players such as Humberto Suazo, Beausejour and Matias Fernandez.

It was in his homeland where he forged his reputation.

In charge of Espanyol for less than a year, Argentina came calling in the wake of their quarter final exit to Holland at France ’98. His six-year period there included a Copa America final, although his side did go out at the group stage of World Cup 2002.

He then moved to Chile, where he revolutionised their football. But for all his accolades and achievements, his appointment at Athletic made little sense from both a tactical and ideological viewpoint.

The squad, so used to controlling games and keeping tight in defence under Joaquin Caparros, would have to shift their mentality to the other end of the spectrum.

More importantly than that, so would a club so used to tradition. He immediately broke the club’s transfer record, shelling out 7.5 million Euros on Zaragoza’s Ander Herrera.

The steady ship had been rocked by the whirlwind of Loco; and it’s shown no signs of returning to its equilibrium.

With the winter break approaching, Athletic found themselves mid-table; fantastic results such as a 2-2 draw with Barcelona and 3-0 mauling of Atletico Madrid were tempered by home losses to newly-promoted Real Betis and Granada.

But the football, in victory or defeat, has been superb; slowly but surely, his methods are starting to reflect on his young, talented, Basque squad.

It may take some time, but if Athletic stick with their man, he could bring them their first trophy since 1984 – and that’s one tradition they’d love to break. 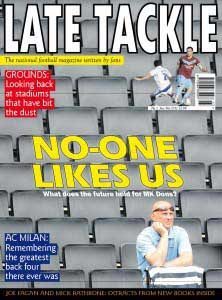 * This article first appeared in issue three of Late Tackle, the national football magazine written by fans. After a brief time out, the mag is up and running again and issue four will be on the shelves in April. For more information  follow Late Tackle on Twitter by clicking HERE