YOU HAVE THE RIGHT TO BE OFFENDED – WHEN IT SUITS

MAN found guilty of a charge he feels he is innocent of by an organisation with a 99.5% conviction rate.

Man is aggrieved at being found guilty and the subsequent ban imposed.

Man not too keen on shaking hands with his accuser who he feels is responsible for his eight-game ban.

Och, the mock indignation, the faux outrage, burn him, burn him as a witch.

Forget Abu Qatada, his links to Al Qaeda and his support for the terrorism that crippled the Western world with fear, no, according to George Galloway, it is not Qatada who need to be deported, but a far more sinister threat.

“If Dalglish doesn’t sack Luis Suarez the Home Secretary should deport him.”

Cried Galloway, who knows a tyrant when he see’s one, he’s been mates with enough of them, including Saddam Hussein, of whom he once said :

“Sir, I salute your courage, your strength, your indefatigability.”

While presumably in the midst of a far but firm handshake with the butcher of Baghdad.

So, murder thousands of your own people, including women and kids, fine, dare not shake the hand of someone you feel has wronged you, well, now that’s a different matter altogether.

To be clear, this is not an attack of Evra, if he believes, as the FA panel did, that he was racially abused by Luis Suarez, then he has every right to be upset, the same right that Suarez has to believe he has been wrongfully convicted on nothing more than hearsay.

He also has the right, however childish, to play up to the cameras and, if he see’s fit, engage in a little triumphalism, football isn’t supposed to be sterile, it’s an emotional game but this isn’t about Evra.

This is more about the pantomime dames who are determined to drag this out as long as humanly possible. For some, it’s easy/lazy copy, for others it’s a chance to get some air-time on TV – some are using it to practice their thinly veiled xenophobia, and then some just like to stick up for a team they definitely don’t support.

First up, is PFA Chief Gordon Taylor, who said yesterday that the whole episode left him feeling

“Quite sick in my stomach”

“It is something we cannot afford to ignore if we are going to succeed with our battle against racism.”

This is of course, the same Gordon Taylor who had spent the previous few days excusing a man, the current England manager no less, who once called Paul Ince “An arrogant black cunt”, even at the time, Taylor was keen to make light of the situation, saying:

“Stuart will be ringing Paul to apologise. Stuart regrets what he said. It was in the heat of the moment.”

Next up, we’ve got the doyen of the Guardian sports-desk, the newly promoted Daniel Taylor, who accused Kenny Dalglish of being:

“Outraged by everything and ashamed of nothing”

And then, turning his considerable invective on his favourite subject, he added

“What Suárez did was callous, premeditated”

This is the same Daniel ‘Ambulance Noises’ Taylor who later that evening on Twitter, excused this, from Manchester United fanzine ‘Red Issue’, as a ‘spoof’. 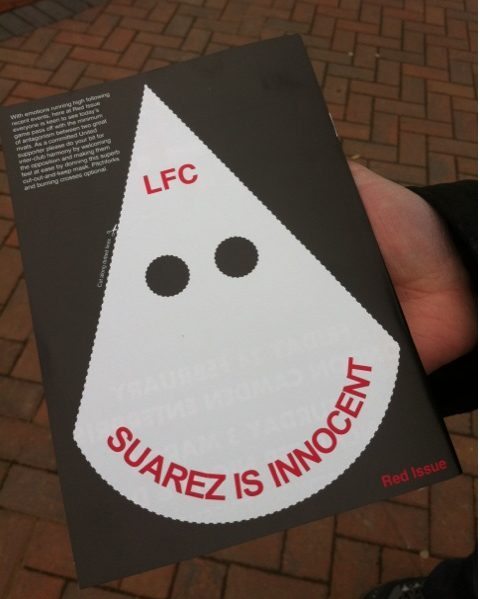 Of course, it’s all a big joke, the Ku-Klux Klan and the brutal murder of black teens, church bombings and campaign of organised lynchings is something to be made fun of – ‘Klanfield’ t-shirts, ho-ho, how funny, how clever.

Greater Manchester Police, fortunately, took a more dim view and confiscated every copy of the magazine on the grounds of ‘Inciting Racial Hatred’

Given the flavour of Taylor’s articles, you’d be forgiven for thinking that he had a soft spot for Manchester United, not so, he claims, unless of course they are playing Liverpool. 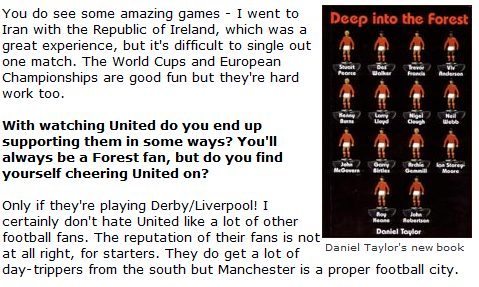 Then you have the biggest hypocrite of them all, Mr Ferguson, whose anger on the subject turned his nose a purpler shade of puce as he raged.

“[Suarez is] A disgrace to Liverpool Football Club, he shouldn’t be able to play for Liverpool again.”

Of course, Sir Alex is right, such behaviour is totally unacceptable, much worse than assaulting a member of the public or missing a drugs test, and should be condemned in the most heinous terms and the perpetrators of such uncouthness should be banned from these isles forthwith, as happened with Roy Carroll and Paul Scholes, didn’t it Alex………Alex.

Alex? Are you there?

Fortunately, some have had the sense to see yesterdays ‘flashpoint’ for what it was, absolutely nothing, and don’t let anyone else convince you otherwise.

“If you don’t like someone, don’t shake their hand.”
Gary Neville