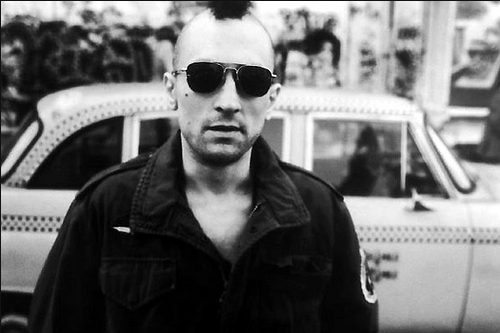 "Some day a real rain will come and wash all the scum off the streets."

1976 saw the longest drought in decades, a ladybird invasion and the peak of the Brotherhood of Man’s career. Elsewhere, David Bowie was morphing into the Thin White Duke and LFC were snaffling a second UEFA Cup with the possibilities of greater things to come. In America Martin Scorsese was good enough to release my favourite film of all time.

Even if you haven’t seen ‘Taxi Driver’ you probably know something about it. Travis Bickle, the mohawk, the attempt to shoot a Presidential candidate that persuaded John Hinckley Jr to do it for real five years later and, of course, one of the most quoted lines in film history; ‘You talkin’ to me?’

If you haven’t seen the film you’re very lucky indeed. I’d dearly like to see for the first time again such is the intensity of those two hours. It’s hard to classify: part shoot ’em up, part social commentary, part horror tale, part failed love story. Christ, it’s even got a training montage.

A recap then. Travis Bickle is a 26 year ex-Marine who lives in a dishevelled apartment in New York. He takes a job as a taxi driver to help his insomnia as he spends most of his time riding on subways and driving through the night so he ‘might as well get paid for it’. He is disgusted at the low life degenerates that infest Times Square and fantasises about wiping them off the streets forever.

His mood improves when he spots his own vision of goodness in Betsy, a campaign worker at the office of presidential candidate Charles Palantine. He takes her out on a disastrous date and when it’s clear that she won’t see him again he exacts revenge by attempting to shoot the phony candidate. When that goes wrong he turns his mind to a second project – rescuing Iris, a twelve year old prostitute from her pimp and the streets. He’s a man on a mission.

That’s a pretty bland description of an electrifying two hours but I’m not the director or the actor. Scorsese cranks up the tension a series of dizzying shots, slow motion, decolourisation of the murder montage and a distracted camera that wanders off away from the main action in a similar style to Hitchcock’s ‘Frenzy’ made the four years earlier.

Coupled with Bernard Hermann’s seedy musical score you can practically hear the blood sizzling in Bickle’s head. For his part De Niro ably shows us Travis’ world of frustration and confusion, of a boozy, pill popping psychopath while at the same time making him so damned likeable.

Make no mistake, you’re on Travis’ side throughout. You want him to succeed with Betsy as she’s so far out of his league it hurts. He’s Workington Town to her Barcelona and there are very few people sympathise for the slain pimps and Mafioso he shoots and stabs to pieces.

If the film makes a social comment it’s that we’d all like to rid the world of people if little things like the law and social convention would allow us. The best stories come from a fantasy. The difference being that Travis own peculiar brand of angelic intervention is anything but pretty. A biblical rapture with hand guns.

As much as Scorsese and De Niro deserve credit the bulk of it has to go to the writer Paul Schrader who for a short time practically lived Travis’ life albeit in LA rather than Manhattan.

Schrader had undergone a messy divorce, had been thrown out of his girlfriend’s flat and even lived in his car for a few weeks. Bad food, drugs and alcohol made him angry at everything other than himself so writing Taxi Driver became a cathartic release. Scorsese set the film in New York simply because there are more taxis there.

Scorsese portrays a city where Travis’ madness is not confined to the main character. One night shot shows him watching a man storm down the street shouting at himself or no one in particular while another features Scorsese himself as a lunatic passenger who orders Bickle to sit outside his wife’s lover’s apartment and explains exactly where he’s going to shoot her – all delivered with more than a suggestion that he’s done it before.

Compared to this character Travis Bickle is Doris Day and it’s that meeting that makes him buy every type of weapon he can lay his hands on. You could hardly blame him at that point.

If Taxi Driver has a central theme it’s one of intense loneliness. He travels around one of the most populated cities in the world but fails to make a connection, the same connection he discussed with Betsy, with anyone save for a tired old cabbie called The Wizard who offers him no real help with his ‘bad ideas’.

To demonstrate this Travis appears in or is in the background of all but one scene, where Matthew the pimp dances with Iris, but for all his screen time he barely communicates with anyone. He is either arguing (Iris) or apologising (Betsy) as he is so out of touch a world he despises.

When he decides that fate has stepped in the tone of his voiceovers change to an almost militaristic jargon (‘The idea had been growing in my brain for some time: TRUE force. All the king’s men cannot put it back together again’) as he only has a true sense of purpose as a soldier rather than a man.

The film ends with Travis making a complete recovery and back in his cab. One night Betsy seeks him out and he gives her a free trip home. She’s obviously keen to give him a second chance but he drives off into the New York night alone.

For a split second he glimpses something not quite right in his mirror before driving as normal. The implication is clear – there’ll always be something dark on the edge of his thoughts forever.

There’s a school of thought that says that this last sequence is a dream or a fantasy as it’s unlikely that the authorities would let him go and Betsy would see him as a hero (or that he would reject her). Even the narrated letter from Iris’ parents is delivered in an almost Bicklesque monotonous voice, suggesting that none of this happened.

I’m sorry if you have no knowledge of the film or I’ve spoiled it for you. If you haven’t buy it immediately and give yourself an uncomfortable two hours.