Let’s Get One Thing Straight…

ANOTHER big game is on the horizon following three crucial wins on the bounce so you’d think we’d be scribing about it; but no – because there’s something well and truly on our tits here at LoveFollowConquer HQ…

And what’s making matters worse is I really fucking rate Meryl Streep but I just cannot separate her from this whole Iron Lady claptrap that seems to be everywhere at the minute.

Maybe my sense of angst is fuelled by social media comments about how ‘awesome’ the film is and how ‘our country needs that sort of strength right now’ – vomit-inducing stuff – and there’s me thinking it was a horror movie, ideally with a happy ending where she ends up face down in a coal mine.

True – it can be hard to condemn those who were lucky enough to avoid her reign through youthful innocence but the fact of the matter is each and every single one of us should be opening our web browser homepage to be faced with this http://www.isthatcherdeadyet.co.uk/ 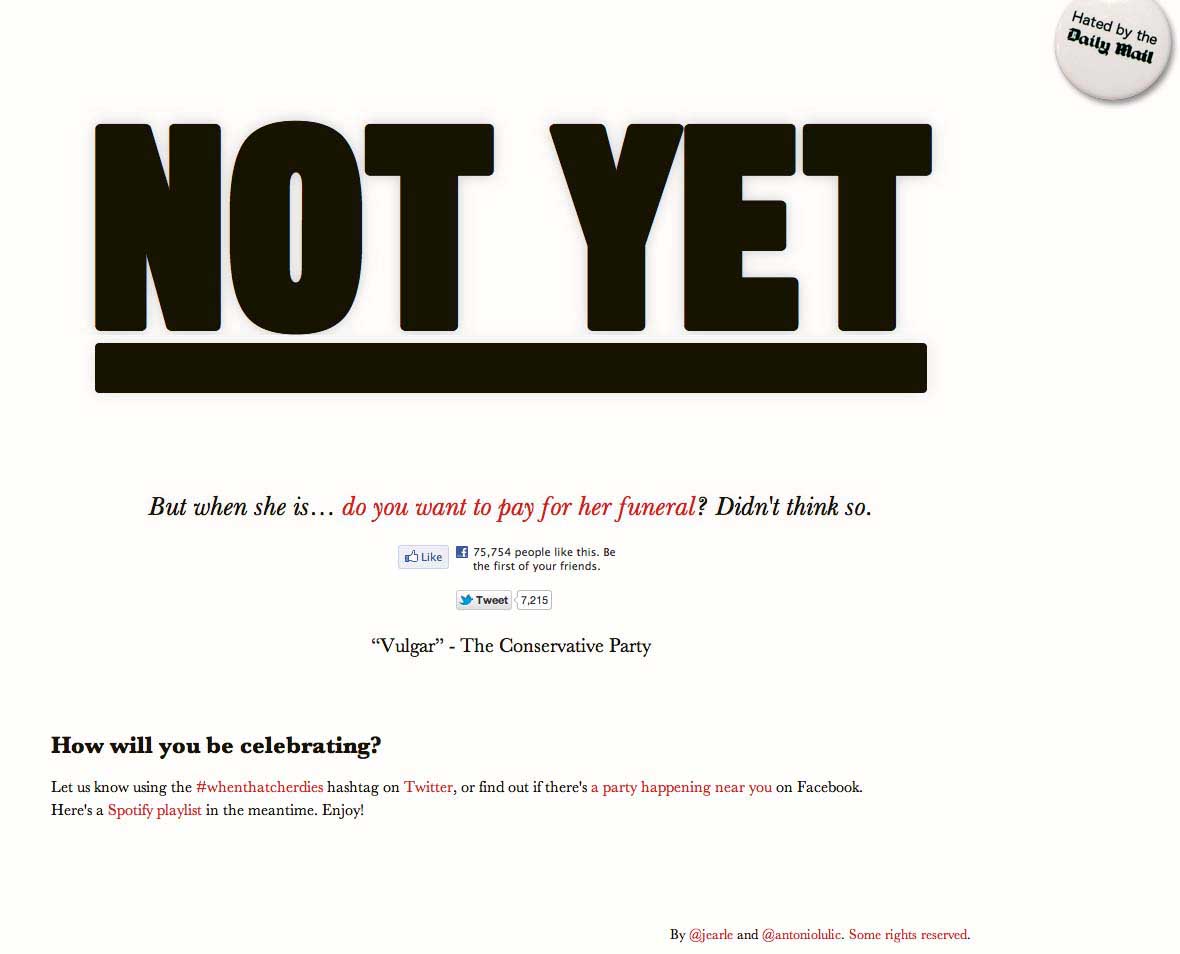 That heartless Tory bitch celebrated the suppression of all working classes and revelled in the controversy of her treatment of them, aided by the selfish, greedy twats who sold their souls for a bit of what she promised them.

One Kopite mate summed it up perfectly: “She waged war against practically everything. Society. Children. Blue collar works. Unions. Liverpool. Common human decency….And then she got really nasty.”

Only Heseltine in that despot government had any time for the city of Liverpool and that should never be forgotten.

Things were obviously at a nadir by the Toxteth riots with Liverpool the poorest city in the country with an unemployment rate double the national average (millions were unemployed nationally).

An average of 12,000 people each year left the city of which 15% was vacant or derelict. In the 1981 riots themselves, tear gas was used against Liverpudlians – the first time it had ever been used in England.

Another fitting quote from a fellow, proud Liverpudlian: “I know it’s morally bankrupt to wish death upon anyone, but I make an exception for this witch of a woman. She blighted my youth and her successors seem intent on wreaking economic havoc on me in the prime of my life.”

Those are thoughts shared by millions of northerners where Maggie’s ideals cut deepest.

She destroyed the mining industry and sold off our national assets.

She slashed social welfare and deemed any that suffered as weak.

The chaos she caused the NHS has never truly calmed.

She dismantled at least six metropolitan boroughs and brought disorder to the cities that most opposed her.

The whole public sector suffered for not being part of the cosy little right wing club that funded her and kept her in power.

She brought down the docks where my uncle worked.

I could go on and on…

What we know now is that it was all part of her ‘managed decline’ masterplan after the recent publication of documents relating to that period.

I was in school and art college when she was PM.

My dad had to travel far and wide to find work; in fact he’d have to put false addresses on applications as Thatcher was selling Liverpool down the river.

Employers outside of the city wouldn’t touch Scousers with a ten-foot barge pole as we’d all been labelled trouble makers.

The truth is – the city’s people were fighting for their livelihoods.

And of course, the Thatcherite views on football supporters were a true indictment of her tenure as Prime Minister; she set up the ‘War Cabinet’ to deal with what she regarded as the ‘English Disease’, football hooliganism, as if there weren’t more pressing concerns.

In 1989 she was pushing hard for The Football Spectators’ Act to go through Parliament and wouldn’t let up after Hillsborough despite advice to wait for the Taylor Report.

She insisted her Bill was pushed and rushed through, knowing full well that the Report would show some major flaws in the Act but she wasn’t prepared to postpone it or wait for the findings of Lord Justice Taylor.

She’d made her mind up; her thoughts on Liverpool were already abundantly clear, and in her mind Hillsborough was down to the ‘misbehaviour’ of fans – that old ‘tanked up mob’ theory – hence the rush to pass the Bill before the conclusion of the Taylor Report which duly laid no blame at the door of Liverpool supporters.

Soon enough, we will find out exactly what she said on April 16th 1989 and discover her role in the subsequent smear campaign and cover up.

For now, we have to put up with the constant Iron Lady hullaballoo be it online ads or high street billboards.

Yes – the old tart is still dividing the country decades on…