The club’s immediate response to the disaster was ignominious, rushing to shift the blame and limit damage – it was a move that would ultimately do far more harm than good and remains a cloud over those that presided over the contemptuous finger pointing.

Belatedly, the club took steps to recognise their culpability and have made multiple conciliatory gestures, hosting two games at the club academy between the two sets of fans – one on the day of the Champions League quarter final in 2005 and one five years later on the 25th anniversary of the disaster, a week in which they unveiled a permanent memorial at Anfield.

In the aftermath of the disaster, 14 people were extradited, tried and convicted of involuntary manslaughter in September 1987.

It is our shame. We recognise that and have taken responsibility for it. We cannot undo the past, we can only learn from it and apologise for it.

Unfortunately, there are those that seek to exploit the deaths of 39 Juventus fans to attack Liverpool Football Club and its supporters, using the death of fellow football fans as currency in a ‘who can act the biggest cunt’ competition.

Some, unbelievably, have even sought financial gain, selling baby-grows referencing the disaster, only ceasing when the online company who produced the garments were alerted and cancelled production for the website in question.

Unfortunately, the internet truly is a global village, one with a disproportionate amount of idiots, all of whom seem to have a Twitter account.

That isn’t to say the benefits of social media don’t far outweigh the negatives, and it can only be expected that in an age when even a cat has a Twitter account, the demographic of people who use it broadly represents society as a whole – ie, you’re going to get a few dickheads.

As such, you would expect these dickheads, knowing they have the protection of faceless anonymity behind the safety of a keyboard, to act, well, like dickheads – let’s, for the sake of argument, call them the ‘dickhead brigade’.

The raison d’etre of the ‘dickhead brigade’ is to bait, to get a reaction by any means possible, whether its Heysel or Hillsborough, anything is fair game. We have our fair share too, who don’t think twice about mocking the Munich air disaster.

It is unpalatable but it is to be expected and generally ignored, I think the posh word for it is deindividuation – you expect it that from faceless shithouses.

But you wouldn’t expect it from one of the most respected football writers in the country – until last night.

Reacting to, by Twitter standards, a fairly tame jibe about working for News International, Barclay, with his 40 years’ journalistic experience, responded in a manner normally exhibited by those he has no doubt pontificated over as scum who blight the game by playing the Heysel card.

As he expected and probably hoped, Barclay got a reaction before predictably accusing those reacting of ‘twisting his words’ but electing not to explain how the above could be twisted to sound any worse than it appears.

No doubt Barclay will again play the victim and flounce off Twitter as he has done previously, blaming those nasty Liverpool fans instead of taking responsibility for what he has published.

Barclay’s latter ridiculous claim that what he said was fair comment and that every Liverpool fan should feel responsible for Heysel was Basil Fawlty-esque in it’s crassness. I was four years old at the time, so presumably, using Paddy’s logic, I’m somehow culpable and so, dear reader, are you.

Notwithstanding the irresponsibility of his comments, coming off the back of months of faux-indignation from her majesty’s finest over the Suarez affair and in the week that Liverpool travel to Old Trafford, one could be forgiven for thinking that Mr Barclay has an axe to grind with Liverpool, or in this case, two.

The first, most obvious issue is one with the Liverpool fan base in general, whom he’s never forgiven for apparently hounding his mate Roy Hodgson out of a job, accusing us of viewing Hodgson as an ‘infidel’ in a spiteful attack on Dalglish after Kenny had pulled Liverpool back from the brink.

A selection of headlines from articles written by Patrick Barclay

Glibly comparing the appointment as Keeganesque, Paddy has never been shy to stick the knife in at any given opportunity, desperate to defend his and many of his peers’ choice for the office of Liverpool manager’s tenure at Anfield.

There is no denying that Hodgson was an obvious bad fit, a manager elected by an incompetent MD pandering to the national media, desperate to get the opinion formers, of which Paddy regards himself as, onside in his brave new vision for Liverpool, led courageously by Christian Purslow.

There is also no denying that a lot of the ‘clued up’ fanbase knew what Hodgson would bring and as a result never warmed to him, but that wasn’t why he failed, he failed on the pitch with his side playing the most insipid, dire, spineless football seen for a many a year at Anfield.

But rather than acknowledge that he got it wrong, that his mate was out of his depth, the embittered Barclay stuck to his guns, and as evidenced by his recent London Evening Standard column, still believes that somehow it was out fault we were flirting with relegation and had been knocked out of the cup by Northampton Town. 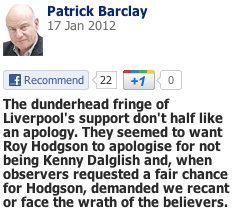 Although it is possible that Mr Barclay’s ire is much more base, having been recently ‘mutually consented’ from the post of Chief Football Commentator by The Times, a paper which has been staunch in its support of Hodgson’s successor (indeed, it was The Times that was the first paper to call for the appointment of Dalglish ahead of the now manager of West Bromwich Albion).

Regardless of whether it’s a problem with Liverpool supporters, or a bitter swipe at an ex-employer, or a combination of both, it is absolutely no excuse for using the Heysel Stadium disaster, whether privately or publicly, as capital to score points.

Maybe the dislike for Liverpool goes back a lot further and is a lot darker and deep-seated, this is after all, is the same journalist who, when commenting on Jimmy McGovern’s drama/documentary Hillsborough once wrote:

WHAT HAS been inadequately addressed by the film, the documentaries, the enquiries, was that five minutes before the disaster, the crowd control was about combating hooliganism.

Suddenly it was about crowd protection. Although there was appalling incompetence by the police, in a sense those who were bereaved, were bereaved by hooligans.

He also previously, in the Times, wrote a column on the 20th anniversary of the Hillsborough crudely putting the Heysel and Hillsborough disasters in the same bracket, calling for ‘Justice for the 135’. What particular justice he wanted was never mentioned, despite lazily bracketing two of the darkest days in our history together with little explanation.

You would hope that the above two excerpts from previous articles is nothing more than ill-informed, uneducated, muddied thinking, because however bitter Mr Barclay may be about us or his previous employer, the alternative, for a man of such obvious intelligence to have such views about Hillsborough and hooliganism, despite all the education and progress made over the last few years, isn’t worth thinking about.