THERE was much sadness amongst the Liverpool supporter community today at the news of the passing Paul Rice.

Paul was one of the founders of the Spirit of Shankly, the Liverpool supporters’ union, and was a vice president as well as the vice-chair of the organisation. 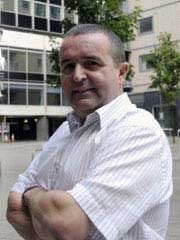 Paul chaired the first meeting of what later became the Spirit of Shankly at the Sandon, holding together a group of around 350 angry Liverpool supporters who all wanted something done about the impending crisis their club was in. Many people deserve credit for their part in the formation of the union but had Paul not been there to keep order that first night the union may never have gone on to be the success it became. 350 angry voices became “the noise that refused to be dealt with”.

He was also chosen to represent Liverpool fans in the Merseyside area for the club’s own Supporters’ Committee, formed after the change of ownership of the club.

He was Chief Executive of Liverpool Commercial District Partnership, a role he took up in 2006 following on from two years as Chief Executive of the Manchester City Centre Management Company. He started out at Liverpool City Council, where he worked for 14 years before becoming Town Centre Manager for Warrington Borough Council. After two years in the private sector as Regional Development Manager at Clear Channel, he returned to Liverpool City Council to become City Centre Manager. He was also Company Secretary of Baltic Creative CIC in Liverpool.

Spirit of Shankly announced his passing at lunchtime today, describing him as “an inspiration to all who met him.”

It is with deep regret and sadness that the Spirit of Shankly have to announce that one of the founders and Vice President of the union, Paul Rice, passed away peacefully in his sleep at the Marie Curie hospice at 11am this morning.

Paul was an inspiration to all who met him and was a dedicated and passionate member of the organisation, always giving leadership and advice.

Our thoughts are with his family and friends at this very sad time.

Tributes poured in for a man who made a difference.

Jay McKenna, of Spirit of Shankly, said: “Gutted to hear the news about Paul Rice. Truly inspirational and one of the best, most knowledgeable individuals I have met. RIP”

Paul Gardner, also of Spirit of Shankly, said: “Absolutely gutted to hear about Paul Rice. One of the greatest people I’ve ever met. An inspiration.  I learnt a lot from Paul. Learnt things that will stay with me forever. To know him and work with him with SOS was a great honour. RIP Paul. YNWA.”

Peter Hooton said: “Paul Rice was an inspiration to all that met him. From Chair of the Broadgreen Labour Party to his leadership of the SOS – a true hero RIP!”

Liverpool FC Managing Director Ian Ayre said: “I was fortunate to have known Paul personally and he was a true fan, and also an excellent businessman. Paul was a leading figure in the representations between the club and the fans in our ownership issues some time back and I had huge respect for the way he conducted himself in my dealings with him. He will be sadly missed.”

The Hillsborough Justice Campaign also paid tribute, saying: “The HJC is saddened to hear of the death of Paul Rice this morning. A driving force behind SOS, Paul will be sadly missed. The HJC offers its sincerest condolences to Paul’s family. You have lost a principled, committed man but his legacy will long live on.”

Sam Armstrong, like Paul a member of both the SOS Management Committee and the LFC Supporters’ Committee, said: “Sleep peacefully Mr Chairman. Your advice and support were invaluable. Will really miss our little chats Paul. XXXXX YNWA”

On behalf of everyone at The Anfield Wrap we offer our deepest sympathies and condolences to Paul’s family. Paul was a great Liverpudlian in all senses of that word, a gentleman; it was a pleasure to have known him, to have met him or to have even known of him.