This week we saw the debut of Neil Fitzmaurice in the #TAW studio, and it just so happened that he had a signed copy of his new film ‘Charlie Noades R.I.P’ to give away to one lucky subscriber.

“Neil Fitzmaurice.” is based around its central character Steve Parr. Steve has everything he wants in life, a loving fiancé and beautiful baby boy. He works in the family business ‘Scrap and Salvage’ in a yard owned by his father Les. Surrounded by a loyal – if a little strange band of workmates who consist of Mick – his best friend and a self appointed gigolo, Sonny – a middle aged divorcee with an addiction to the Discovery Channel, Kitty – Steve’s auntie, a middle aged spinster with a razor sharp sarcastic wit and Elvis who is…well he’s just Elvis, oh and there’s Frank the junk yard dog – he’s got a sexual appetite matched only by Hugh Heffner! 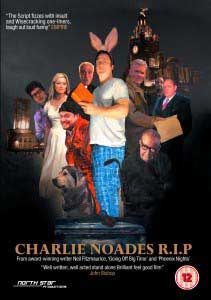 around and make the Yard into a success even if it means causing friction between him and his father Les.

Les doesn’t share his son’s spirit for enterprise, forced to take over the yard at an early age due to his father’s tragic death, the business has made him weary and cynical and his spirit is at breaking point. Les also has a secret known only to him and a local business man called Vinny McCoy, a vain, megalomaniac, this nasty piece of work has plans for the yard and will stop at nothing to get what he wants!
On returning from a routine job, Steve is handed a business card left by a mystery caller, he meets the man, a solicitor, who informs him that he has been left a wooden chest in the will of a complete stranger, a man called Arthur Wicks.

Fuelled by intrigue and excitement he returns to the yard with the chest but when it is opened it reveals a collection of books! Steve and the others quietly return to their duties a little disappointed but that night Steve decides to read a book at random and is amazed by what’s inside, the books are diaries, written by Wicks they reveal a long, forgotten secret involving Steve’s Grandfather, Ernie Parr, and a large quantity of hidden gold taken from a floundered boat in the mid 50’s.

The location of the gold was known only to Ernie and his sudden death took the secret with him, a secret that Arthur Wicks spent his entire life trying to discover.
Armed with this information Steve embarks on a modern day treasure hunt in an attempt to find the gold and change the lives of him and his friends forever – if only it were that simple – first he has to decide whether the diaries tell the truth or are just a work of fiction, then he has to convince his family and friends and risk losing them by being consumed by the legend.

Can he unlock the secrets and find the missing gold? He’d better do something quickly because what he doesn’t know is that the clock is ticking for everyone at ‘Parr’s Scrap and Salvage’…….