Author’s note: This is not about Luis Suarez, or Liverpool, or the Football Association, or the rights and wrongs of the case which led to the striker being suspended for eight games and fined £40,000. Enough has been written on that subject by my peers and superiors in what might be termed the football commentariat; I have little of worth to add, on that subject, and, even as a Spanish speaker and a former inhabitant of South America, have no more qualification than most to do so.

What has struck me as remarkable, in the days since the verdict was announced, was how many people “know” what Suarez said, and even why he said it. This is quite a feat, when the evidence is bafflingly yet to be released. The debate remains one of impassioned ignorance. I do not wish to become embroiled in an uninformed discussion of fairness and unfairness, of claim and counter-claim. This is not about Suarez, or Liverpool, or the FA. It is about what it is to be English, and what the last few days have shown us about our nation.

I should, of course, declare a bias; not the one that has so polarised assessment of the case and of the judgment, between those who mindlessly admit no wrongdoing on the part of a hero and those who have sought to see a man labelled a racist simply so a rival football team might be deprived of their best player, but that of the self-loathing Englishman, and that of the Hispanophile, and that of the natural, inherent contrarian. All other considerations, I hope, have been removed.

THE THREE white men sat in a room. The milky light of winter seeped through the windows. Realisation dawned in their minds. Before them was a case of the utmost complexity, but one they must unpick. They made unlikely arbiters of justice. A former football manager. The chairman of a local FA. A highly-regarded QC. Eminent in their diverse roles, of course, but now placed in a position understandably well beyond much of their experience.

The case was unprecedented: not just to them, but, as far as anyone in that room could tell, to anyone. On the surface, for all the investigation that had gone into it, it was simply one man’s word against another. Below that, at least in one interpretation, it was bound up with issues of cultural relativism it would require a scholar to explain.  These three men, the lawyer, the manager, the administrator, had been selected by cruel kismet to unpick the semantics, to navigate between the nuance, and to deliver a judgment. 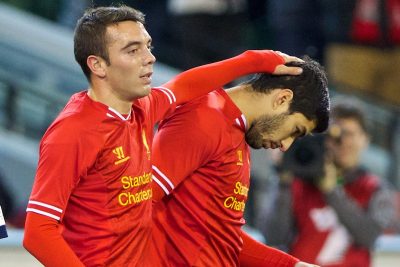 Luis Suarez against Melbourne Victory during a preseason friendly match at the Melbourne Cricket Ground. (Pic by David Rawcliffe/Propaganda)

What’s in a word? Whichever of the two words allegedly used, no natural equivalent exists in English. It has been used both as defence and prosecution that both the words – negro and negrito ­– might be used affectionately. Here, perhaps, there is a parallel. The word ‘pal’ might be used affectionately. Indeed, if you were to explain it to a non-native speaker, you would describe it, perhaps, as a friendly placeholder. Have it growled at you in Glaswegian, though, in the sentence “You looking at me, pal?” and there is nothing affectionate about it. The meaning of a word, especially a placeholder, lies in no small part in the delivery.

But what of the reference to colour? In England, that is clearly intolerable. Of that there is no question. Even in an age when we live, largely peacefully, in a multi-cultural society, we are not a country who like to mention colour. And, of course, the offence took place in England. Our house, our rules? Fine. More importantly, the central tenet of what can and cannot be defined as racist has long been seen not as the intention of the perpetrator but the interpretation of the victim.

But, then, in the plaintiff’s defence, his own cultural heritage, his own understanding of what is acceptable. In his homeland, it seems, such words are used simply as descriptives, and certainly without enormously offensive overtones. The Argentines, for example, pepper their speech with the word “che”. Mate, pal, man. It is used almost unconsciously. It can be substituted for a more personalised term, though. Rubio. Gordo. As one of the defendant’s countrymen put it, this is a place where, if you have a big nose, your nickname is big nose. A big head, and it’s big head. If you have darker skin – not black, just darker – then you are negro. Not “a negro”. Simply negro. Sensitive? No, not at all. But deliberately offensive, designed to wound and directed to hurt? Not really.

Both arguments have their merits. If a white English player called a black English player “n******”, it would be an open and shut discussion. There would be no discussion. No ifs or buts. We all know the effect, the loading, of that word. Whichever way you see it, to suggest that this case is not more nuanced, more complex, more intricate is borne of either incomprehension or arrogance.

In such an instance, any punishment handed out – or indeed any reprieve afforded, since it seems the defendant did accept use of one of the terms under discussion –should, presumably, reflect that nuance. Perhaps a minor ban with a far heftier one, one to make clear that not learning from your inability to accept our cultural sensitivity would be utterly unacceptable, suspended above it?

Alas no. The lawyer, the manager and the administrator, looked at this fine-mesh case, this argument of intent and interpretation and this issue of cultural relativism, and brought down upon it the swingeing sword of righteousness. A draconian penalty, a message sent. This is our land. You will play by our rules. Assimilate or die. This is Albion, perfect. Perfidious.

The Football Association’s Independent Panel, of course, are not lawmakers. The FA occupies a curious role in society; it is a state within a state. A person subject to its laws can commit an offence that, by possessing both mens rea and being, in itself, an actus reus, is a crime, on English sovereign soil and yet not be judged by a criminal court. Ask Roy Keane, and Alfe-Inge Haaland’s knee. Aggravated assault? No. Fine and a ban? Yes. Those patches of greensward up and down the land are FA embassies, in effect. What happens there is under their jurisdiction. It is only when those in the stands become involved that the police may intervene. The ones on the pitch have diplomatic immunity.

It gets stranger: the FA is not just a judge and a jury, but a plaintiff in itself, too. That was shown in the appeal of Wayne Rooney’s red card against Montenegro. That, to the FA, is a three-match ban. Except when Uefa’s sliding punishment structures allow, when it might only be a two-match ban. That conflict of interest is unavoidable, thanks to the way the administrative side of the game is constructed, but it is also undeniable. The FA’s reasoning is that the clubs do not want sliding scales of punishment, that Uefa permits it, that there are different standards and different practices. Occam’s Razor, though, applies: the simplest of several explanations is the most likely. The FA has a dual role.

In neither does it make the law. It has, despite that, in the Suarez case, set what might be termed a media precedent. The reaction to the guilty verdict, the ban and the rancour from Liverpool that followed, on the part of the newsmakers was that the FA had taken an important step to show the world that racism in any form is not acceptable in this country. Quite right. It is more than that, though: we must now accept that we believe, as a media and, by extension, as a mewling nation, that the basic rule of society dictates that an immigrant must conform to the laws of the country in which they find themselves.

That is absolutely fine. Consistency, though, is the key. The next time a British couple are arrested in Dubai for holding hands in a mall, or jailed for kissing in a public place, we can only presume not one of the same media outlets who have so heartily backed the decision of the FA’s independent panel will criticise the legal system of the UAE.

They will, of course. Hypocrisy is an English disease. It infests every part of our lives. That became clear with the cringe-inducing international campaign for the national team to wear poppies on its shirts, swiftly followed by the outrage at the very idea that Argentina might be allowed to adorn its Olympic uniforms with a badge signifying the Malvinas conflict.

It is permitted, though, because English culture is so unstintingly convinced of its own superiority. The Suarez verdict has shown that to the world. The panel have taken into consideration the idea that, elsewhere in the world, words are not quite so loaded, colour not quite such a taboo identifier, and decreed that such an approach is outdated. We pride ourselves – in many ways correctly – as standing in the vanguard in the fight against racism. But in doing so we too often find ourselves preaching that others must follow our lead. Perhaps they do not need to; perhaps in Latin America the issue of racial discrimination manifests in a different way, and therefore requires a different treatment.

Besides, our approach is not flawless. There is an allegation that Patrice Evra, Suarez’s target, labelled him a “South American”. This is a strange thing for a footballer to say. It has been suggested that Evra, a Spanish speaker and a close friend of Carlos Tevez, may have used the term sudaco, a word applied to South Americans by other Spanish speakers, and one considered deeply offensive.

Not in England, though. Liverpool’s assertion that Evra should be punished for that insult was, rightly, derided as the last desperate snatch of the damned, a vapid attempt to sully his name in a bid to lessen the negativity around Suarez.

Putting that to one side, it was never a logic that would elicit much sympathy. We may not like to mention colour in this country, but where ethnicity is taboo, nationality is not. An imperfect example: I have a Scottish friend, who is obviously quite the skinflint. I have another friend, who’s black, and therefore isn’t the strongest swimmer. Both of those comments are derogatory, prejudiced and based on the most hackneyed, malicious and inaccurate stereotypes (and, needless to say, are entirely hypothetical and do not represent my views). One will have caused you to flinch. The other will not.

Why should the colour of your skin be a source of offence but the place of your birth, the land of your parents not? Racism has long been a vile stain on our society, but so too xenophobia. Both have resulted in a myriad deaths and countless horrors. It is a question I cannot answer: perhaps we have evolved beyond the nation state. Perhaps racism is the more virulent of two poisons. Or perhaps a culture which continues to place such a taboo on the very issue of race, which is so conscious of colour that it will not permit its mention, is suffering from an ultimate hypocrisy: not being quite as advanced as it claims to be.