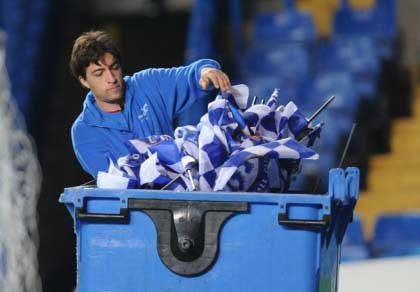 Ah, so thats where all those plastic flags ended up

THE unwelcome draw for the League Cup brought us back to Stamford Bridge ahead of places like Cardiff and a very tricky potential home tie against Crystal Palace. Good job we dodged that one.

Since the opening day of the 2003 season we have played Chelsea no fewer than 35 times including 19 League games, 10 European Cup ties, one FA Cup semi -final, a Charity Shield and 4 League Cup games. From 2005 – 2007 alone we played them 10 times. This season it’s twice in nine days.

We’ve had this with other teams before of course. There was a time in the late 80’s where it seemed we were playing Arsenal or Everton fortnightly but it’s not quite matched the concentration of fixtures we’ve had over the last eight years with Chelsea. The fixture has also attracted attention due to the high amount of transfers between the clubs (Torres, Meireles, Benayoun) and players who have played for both sides. (Cole, Johnson, Zenden, Anelka). Even our assistant manager has sat in both dugouts. This is to be expected when the top clubs use the same pool of top players and we’re always going to meet as we progress through competitions but playing Chelsea every year for five successive seasons in Europe? Jesus.

Where the Liverpool v Chelsea game has differed in recent years is the dramatic rise in rivalry. Since we had the temerity to bloody their noses in 2005 the media have built up the fixture as a grudge match, even a derby in some ways. (Incidentally, sorry Jose, sorry Sky, but the ball crossed the line. Gallas has his left foot on the line and his right foot over the line to hook it out. Before the 2007 game Richard Keyes, hair sprouting from all quarters with every word, told the world with a conspiratorial wink that it wasn’t in, was it, much in the same way that Tony Soprano jokingly tries to get Paulie Walnuts confess that it was he who told Johnny Sac about the Ginny Sac joke). Some of our own support now consider the fixture to be as significant as the derby or United, something that would have been unthinkable at the start of the last decade.

Why is this? Is it the vulgarity of the nouveau-riche? Chelsea have bought their way to the top table with reckless abandon and are sniffed at in the way Jane Austen’s households would turn their noses up at rich families who made their fortunes by, whisper it, ‘trade’ where our own success comes from a dynasty of sensible(ish) spending and proper redblue blood. These loathsome upstarts are merely Lottery winners eating soup with the wrong spoon and wiping their mouths on the back of their sleeves while LFC knows which way to pass the port and eat our desserts with a fork.

But if money and lack of breeding has flowered into a rivalry why weren’t we like this with Blackburn? They spent like a sailor on leave in the mid-nineties and even won the League on our own ground but there were never any mocking songs about history and lack of European Cups back then. True, it could have had something to do with their manager at the time but the same argument extends today. Not only are Man City outspending Chelsea at their profligate best but they’re clearly and unequivocably from Manchester. This should be a rivalry made in heaven. The key elements are there, shit then very good indeed, poor then rich, arriviste fans who probably supported someone else at some point and, most of all, even more Mancunian than United. We should have a dozen songs in our repetoire for them alone but no. It’s Chelsea who take the bronze medal on the hate list. Some of even have a slight regard for City as they hate United too and, significantly, Ferguson clearly hates them back. My friend is the enemy of my enemy.

Maybe it’s simply a geographical factor. Not only are they a new moneyed rival, they’re a Southern rival with a Loadsamoney/in your Liverpool slums mentality. Furthermore they’re a patriotic rival. At the 2007 European semi I counted 19 St George flags dotted around the ground and not all of them had ‘Chelsea’ written on the central bar. Supporting England is a prerequisite for any Chelsea fan, a concept which is pleasingly so alien to us that we sing about our own nation with glee. The simple fact is that most of us are indifferent to England while for Chelsea it’s the basis for a large part of their culture. Once the ‘We’re not English, we are Scouse’ songs ring out at Stamford Bridge you’re guaranteed a fine volley of abuse by return. They don’t like that. They don’t like it one little bit. They don’t like it in Reading either. Those who went to our 3-1 defeat a few years ago may remember the choked surprise when the song started. I’ve never seen such genuine shock and real indignation at a match before.

The rivalry hasn’t waned since Mourinho departed despite his comedy replacements in Grant and Scolari. Jose was liked well enough in 2004 thanks to him legging it down the touchline at Old Trafford and some were even a bit disappointed when he didn’t come to Anfield. Never underestimate the popularity of a man who can fuck Ferguson off. Rafa may not have been as successful as Mourinho but the majority are happy with the choice we made as both men display the very traits of their clubs. Mourinho – loud, brash and stupefyingly arrogant, Rafa – understated, a good winner and loser with a fierce proud heart burning within. Mourinho had some great moments though. For a manager to leave the second leg of the 2007 semi and claim he never noticed the magnificent atmosphere is laughable and just a bit cringeworthy. A funny comment had he won but spoilt, churlish and sulky as he’d lost. I love Dalglish standing up to Ferguson while the other managers kowtow to his power and influence and Mourinho too took on both Ferguson and Rafa in the vastly overrated ‘mind games’ department. One futile attempt to rile Rafa saw my favourite ever Benitez quote in reply.

Rafa would never have shushed fans following a spawny last minute own goal from a man whom he was trying to buy. In fact, at one of the most stressful tie between the clubs when an element of schadenfraude could be demonstrated in revenge for the sniping in the press our man simply sat cross legged on the touchline and watched another European Cup final come our way. No running down the touchline, no shushing the away end, no being thrown onto the shoulders of the players – just dignity and class. Not Chelsea. Liverpool. Afterward Mourinho talked down the importance of the fans while Rafa talked about tactics and Athens. You can’t buy that.

If Chelsea fall down the table and their oligarch pulls the plug the rivalry will cease and we can get back to the main business of the day. Hopefully then we’ll stop building them up as something they’re not and lending credence to the bona fides.