What’s To Be Done The Europa League? 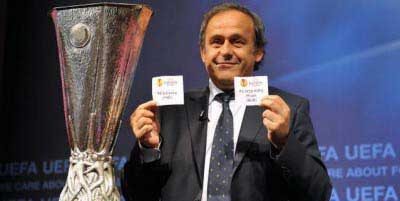 THE usual rash of complaints emerge about the Europa League every season. That it is too bloated, too long-winded a competiton and has too many dead rubbers. It conjures up too little interest and isn’t a patch on the old UEFA Cup. Let’s have look at it:

It isn’t controversial to say that lacks both zest and coherent identity, a strong central ethos rather than seemingly like a cavalcade of afterthoughts. In short, something needs to be done.

The inclusion of the Champions League 3rd place sides also needles. The reasons this is done aren’t complicated though. Firstly, what UEFA don’t want is sides that are coming third and fourth in their Champions League groups and unable to qualify giving up the ghost and playing weakened sides which corrupts the competition for the final crunch group games. Secondly, the 3rd place sides could offer increased lustre to the competition.

It is important to point out that introducing the earlier Champions League losers doesn’t seem to jar as much – we don’t feel the season or competition has really started by the time they drop in, but if you’ve played group stage football of the Champions League then it really does feel gimmicky.

I think this is the first hurdle to overcome. UEFA need to bite this bullet. Whether they do that by increasing any financial incentive for a 3rd place finish in the Champions League or by simply letting the competition be what it is, they need to abolish the notion of the third place sides getting a second go.

Once you surmount that, the feeling grows that competition could just be reinvigorated.

The immediate and obvious answer is knockout. Just make it unseeded knockout and it’ll all come together. It’s an attractive viewpoint but begs the question – do you go to 256 teams or 128? I’d err towards 128. There is greater quality. Having lost 8 from the Champions League group stages you have 186 in total. Going to 128 would distill the tournament nicely.

To make it straight knockout but include sides that don’t make it through the Champions League qualifiers you have to start it after the Champions League play-off round is completed. However doing this makes it seem fairer; yes you may have attempted to qualify for the Champions League and yes you have failed. But you are in the hat for this from day one. And what that does is remove the feeling the competition starts before most clubs’ pre-season. It gives it more weight and it offers a bit of dignity, not least in comparison to the Champions League with its half rounds before the group stage.

That contrast is the ideal and should be pursued throughout. The Europa League needs to be whatever the Champions League isn’t; another reason to be unseeded and knockout. But that’s just to start with. By the time February comes round the Champions League is about knockout football. Why not then make the Europa League groups come February? Unseeded still, but two groups of four with the winners making the final? A retro World Cup feel about them and a way to build the tension right up, be different and also have the two best sides in the final as well as having a genuinely competitive group stage rather than the current ongoing flat affairs.

The final. Make it all retro: the format should go back to two games, home and away. Remove the neutral ground and get the sides competing in each other’s back yard. The atmospheres would be electric and, again, it is a contrast. Something any side would want to be part of one some level. Just don’t end it with spinning a disc.

The alternative to 128 as described above is 256 and the only coherent argument to go to 256 would be to make it a replica of the FA Cup – one game, home or away round by round and something that can bring about hugely contrasting ties. Is that too revolutionary for European competition, too unfair? It could be fun. Football’s rarely fun these days. Fun is not to be sniffed at. There would also be fewer games.

In my view it’s either 128 smashing into a group stage or a helter-skelter 256 sides playing one off knockout games with the draw integral. Either should start in September, everyone in the hat together at random and no seeding without. The 128 would breakdown like this:

Meaning 16 games to win the cup with the quality squeezed into the final eight.

Or 256. A chaotic affair of one offs with the potential for shocks:

8 games there: the final and semi-finals in a neutral location as per the FA Cup.

Either of these steps would be reinvigorating: the former gives UEFA fewer sides but greater and arguably more engaging games. The latter gives UEFA more sides but less compression and guarantee of quality. Both would offer the possibility of genuinely meaty ties early by abolishing seeding, one offers lesser sides the possibility of getting some momentum up and the other offers the chance of showpiece group stages.

This competition is too historically prestigious to end up like as dumpy as it is now. Let’s just shake it right up and again contrast with the Champions League. Make the Champions League look a bit square, a bit vanilla instead of an overwhelming behemoth. Rather than be a poor relation, the Europa League should be a weird uncle with a few tricks up his sleeve. Boss every now and again, but not someone you want to see every day. That’s about as much as it can be now but that’s far better than a crushing bureaucratic bore.