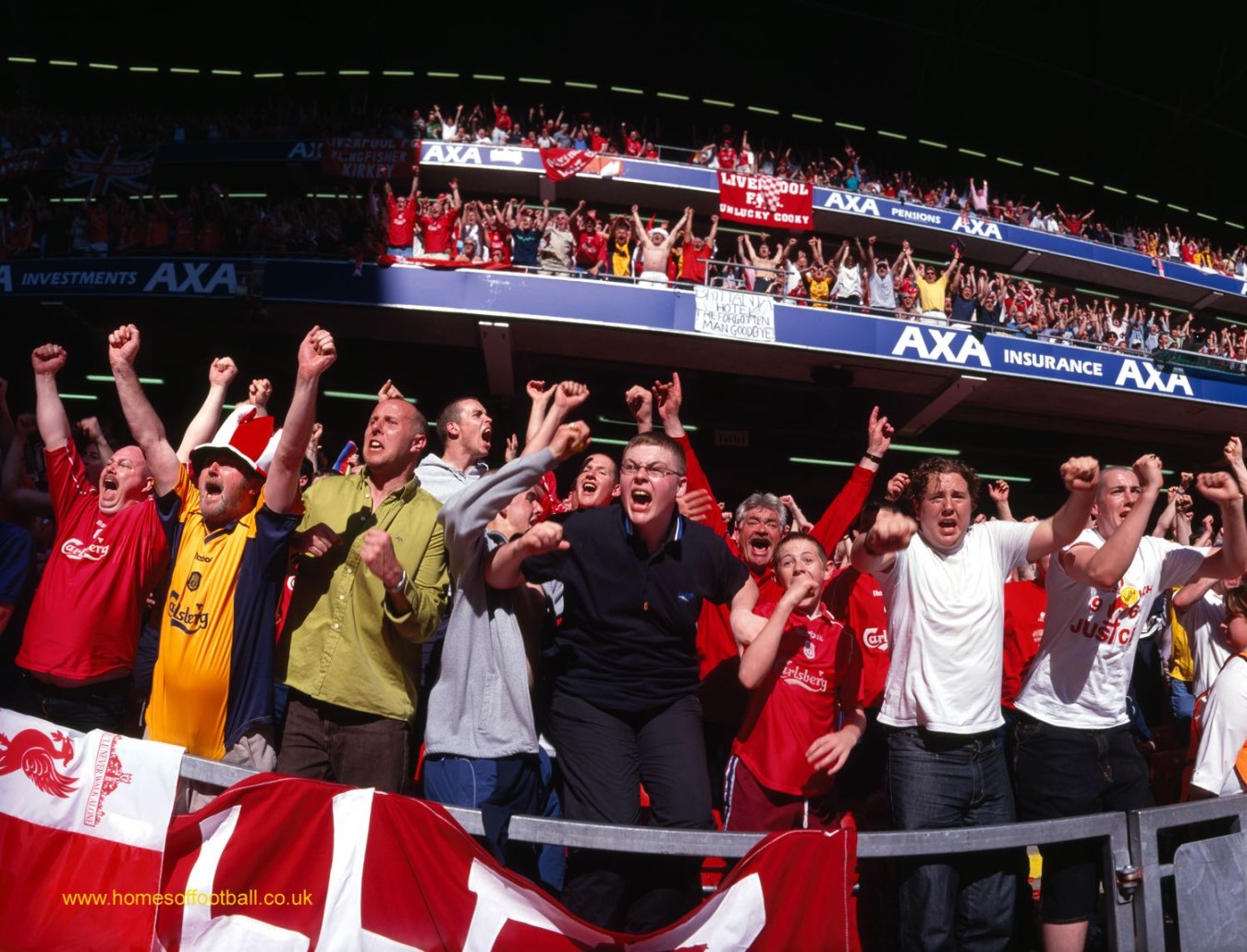 EVERY time I see that a magazine or newspaper has a feature on the (fantastic) sports photographer Stuart Roy Clarke, I smile. Because I usually know what’s coming.

Stuart Clarke, for those who don’t know, concentrates mainly on taking pictures of football fans rather than football action, and he’s taken some great pictures across the country of different aspect of being a football fan, be it the agony, the ecstasy, the journey, the congregation of the masses or sometimes just girls eating chips. And one of the pictures that journalists most like to use features me and the lads, right at the front.

I guess everyone has their ‘coming of age’ year as a football fan. That year where you stop going the game with your dad so much, and start going with a group of lads. Mine was 2000-1, first year of university. I had moved out of home, I had a bit of money in my pocket and I had a group of lads to go with. I’d gone away to Newcastle University, but with no lectures on a Friday and a UEFA Cup schedule meant that Thursday night and Sunday games were very much doable. And do them we did.

I mainly teamed up with a lad I had known since I was a kid, his schoolmate and a couple of lads they’d met off the RAOTL forum (WAY before it was even remotely acceptable to have internet mates). A lot changes in that year as a fan. You swear a lot more watching that’s for sure. You realise that chanting ‘Liverpool’ at an away ground means much more than shouting for a football team, especially in London. And it takes you half a season to get your head around why it’s necessary to meet at 8am for a 3pm kick-off in Manchester. By that point you’ve stopped worrying about what to wear from about 48 hours before and you feel like you fit in. You start walking a bit differently too. I wouldn’t go as far as to say I had a swagger but it was on the side of cocky for sure. And once lads start letting on because they recognise you then you feel a made man. “Who was that lad?” “Just some lad I chatted to in Derby” “Why is he letting on to you?” “Fucking face, aren’t I?”

Obviously it was a season of many highlights. THAT away end at Leeds in the FA Cup after smashing Crystal Palace and Clinton Morrison in the week was pretty special. Even 10 years on and many great aways later, those who were there still smile wistfully at the thought of Leeds in the cup. Watch it again on YouTube if you can. The crowd go ballistic. Being in the Gladys Street for Gary McAllister’s derby winner was a great feeling as the stand emptied around us. And then beating Barcelona on the Thursday after was pretty special too. I remember going into The Albert after that and shouting “make mine a treble” to general groans around me. Another important lesson learned. No matter how happy everyone is, you’ll never get away with a shit joke.

But obviously the finals are the main ones. Birmingham was nervy, Alaves was great and my first European final, but Arsenal in the FA Cup was the one for me. And not just because of the picture to commemorate it. I remember it being dead sunny like all FA Cup finals should be as we stood on the front row baking hot. I obviously remember us getting battered for most of the game. I also remember Thierry Henry screaming to the linesman right in front of us for a handball on the line and us giving him absolute dog’s abuse, before seeing it on the TV after and realising he may have had a point. So if you’re reading this Thierry, soz abar that. And of course I remember the goals. Two from Michael Owen, the second of which, as you can see, sent us all ballistic. What a shame he had to retire through injury in 2005. Who knows what he could have achieved.

It was very nice of Stevie Gerrard and the lads to win so many trophies for our coming of age year. I’d like to think that they tried extra hard. And it was very nice of Stuart Clarke to document one of the highlights of that fantastic year so brilliantly. It’s actually one of four pictures of us that day, although thankfully the one taken just after with me hugging a large female steward rarely sees the light of day. But I’d always wondered what I look like when we score a big goal and after that I know. Constipated and with loads of chins.

If you get a chance have a look at Stuart Roy Clarke’s website or his book The Cradle of The Game. There are 36 brilliant pictures of Liverpool fans on the website, and loads more of fantastic shots from across the UK. It’s a welcome and increasingly necessary reminder of what the game is actually all about. Which is not superstars, transfer fees or global revenues, but groups of lads and lasses gathering in amphitheatres and sheds to get disproportionally emotional about a game. Clarke captures not just moments in being a supporter but moments in time beautifully and I’m made up to be part of one of them.

I’ve still got my three final tickets in a frame at home, by the way. I looked at it when I decided to write this piece. Twenty quid my ticket for the FA Cup final was. Twenty Quid.