We’ve had a recurring theme in recent weeks of ‘Greatests’ over the years and this week’s was a no-brainer, even if the judging process was a bit more difficult. Let’s face it, any win over the Mancs is just sweetness personified. Here’s our top five, let us know your thoughts…. 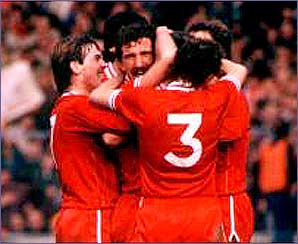 In front of a raucous 100,000 in attendance at Wembley, Ronnie Whelan curled home a memorable extra-time strike to earn Liverpool their third successive League Cup – the last final of Bob Paisley’s incredible reign. Whiteside had put United in front and it seemed as though we wouldn’t get through until Kennedy’s intervention 15 minutes from time – vaguely remember Kevin Moran having a blinder but going off injured and United wobbled. Dusty then whipped a right-footer past Gary Bailey to clinch it and deny Ron Atkinson his first trophy with the Mancs. Souey ensured Bob went up those steps to collect the cup himself, as we completed the first leg of the championship and League Cup double.

Twenty years later, we did them in the League Cup final again but this time is was in Cardiff and they were favourites. Still, we knew we had them on the run having won five of the last six against them; the only one that got away was Jerzy’s nightmare afternoon that gifted Forlan a brace at Anfield and he exorcised his demons in brilliant style proving the cornerstone of a 2-0 win. Stevie hit a blistering shot that flicked off Beckham and into the top corner before Dudek kept us in it in a nailbiting match. We soaked up their pressure before Didi released Owen who took his time and buried it past Barthez – glee. Always remember a couple of reds banners that day which I’m sure read, “Richard Hillman is a Scouser” and, “Michael Owen: weapon of Manc destruction.” Always thought you could swap those two names over.

Boxing Day 1978 and the reds made it a thoroughly miserable Christmas for United who were getting some serious retribution for preventing our treble in 1977 with the scabbiest of FA Cup Final goals. The Greenhoff brothers were on the pitch again but this time they were put to the sword by a Liverpool side full of swagger and verve – of course European Champions for two years running. Ray Kennedy, Case and Fairclough notched the goals in a display of total football from arguably the greatest Reds side ever featuring Kenny, Crazy Horse, Jocky, Souey and Terry Mac to name just a few of that all conquering team. We went on to win back the league from Cloughie’s Forest, conceding just 16 goals in 42 games along the way.

Ron Atkinson let Peter Beardsley go in 1983 and he came back to haunt Ferguson’s United in 1990 with a three-goal haul in one of the most one-sided wins over that lot from down the East Lancs. Ferguson was under pressure, in fact many in the away end were calling for his head in the second half and it wasn’t the first time, and the reds revelled in it with a sumptuous display of pass and move stuff that left our visitors bereft of ideas. Must have been October time as we’d made a blistering start to the season winning several games on the bounce, and Beardsley’s craft and guile was integral as well as his eye for goal.

Remember thinking just how big the gap was between the sides and taking it all in; they were starting to spend some money but were nowhere near us and we rubbed their noses in it – could easily have been seven or eight.

Some may argue that because we lost the league title chase, this result loses significance. But at the time, I rarely remember feeling better. The whole day was just memorable – from the cringe-fest that was the Mancs pumping Americanised music into the soul-less Glazerdome which was drowned out by YNWA to coming from behind with great attacking football that left the United defence shitting themselves – they weren’t used to teams coming to their place and going at them, instead teams would normally roll over, but Rafa and the boys were having none of it. They got a dodgy penalty (surprise), but Torres punished Vidic’s dawdling before Stevie’s burst of pace took him past Evra who felled him in the box and Stevie converted. Aurelio’s free-kick gave us daylight before the coup de grace – Dossena’s lob over a stranded Van Der Sar in a half-full stadium. Four f*cking one. The Stretford End had earlier sung ‘Rafa’s cracking up’ – it came back to bite them on their fat arses. Remember Hyypia coming in last minute and being typically dominant at the back – what a legend. And what a great time to be a red with other hammerings of Real Madrid and Aston Villa – if we’d got a bit of luck in the run-in that title would have been ours. Still, the world saw us tear United apart in their own back yard.