Bellamy can still swing it for Liverpool 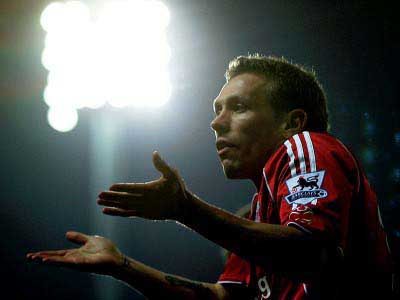 “If I ever wrote an autobiography – and I won’t – it would be called Don’t Google Me.”  So once said Craig Bellamy, who at 32, sealed a transfer-deadline day return to Liverpool.

Some fans are overly concerned that the Welshman could upset the mood around Anfield and Melwood, which, at the time of writing, couldn’t be better. To me, it represented brilliant business for a player that cost £14million two years ago and added another essential ingredient for success to the Anfield armoury – unpredictability.

As Damien Comolli so succinctly put it: “His work-rate is really good and what we really liked is the fact he is so versatile. He can play wide, he can play up front, he can play off the target man, so he is an ideal complement to the squad we have built during the summer.”

He’s also got a bit of a reputation as a loose cannon, of course. He knows that, too, hence the quote.

But it’s a card played too often for a man who hasn’t been sent off since 2002 and who has pumped over £1million into the Craig Bellamy Foundation, an organisation which promotes “personal and social development through the power of sport” for the children of poverty-stricken Sierra Leone.

Clearly he’s not all bad. But equally, it would be ridiculous to paint him as a saint. As well as the infamous incident when he mistook John Arne Riise’s bonce for a new ball from Titleist, Bellamy also caused untold upset in his time on Tyneside.

Terry McDermott, who labelled Bellamy “a little upstart”, described it in no uncertain terms: “I’ve never come across so much hatred and unrest over one person.”

With a charge sheet ranging from aiming a headbutt at the Dynamo Kiev defender Tiberiu Ghioan to throwing a chair at coach John Carver, it seemed fair comment at the time. Reports also said he had to be pulled apart from Graeme Souness during a Newcastle training session. Only one winner there, Craig, and he’s not from Wales. But that was then and this is now.

On his arrival at Liverpool in 2006, Bellamy confidently declared: “I believe I have a wiser head on me now. But I’m not naive to think that people will suddenly start saying what a nice bloke I am.”

The golf club incident means it’s easy to forget what he can actually do on the pitch. And that, as a fan of players who put maximum effort into games, is the bit I like. Almost as famous as the incident itself, is the brilliant win in Barcelona which followed. The Catalans didn’t lose to English sides in their own backyard. They did now.

Less well remembered is a performance he put in at Wigan. It promised to be a dull game, and the large travelling support which had swelled the JJB Stadium crowd to 22,000 was already busying themselves with goading the home fans when the match got underway.

You couldn’t blame them. Back then, December 2006, the Reds had gone over 10 hours without an away goal in open play. Bellamy set off on an immediate one-man mission to change all that. This was the fired-up, feisty, wasp-like Bellamy that won’t leave defenders alone. It wasn’t long before the Wigan defenders were feeling the sting.

Nine minutes in, he’d latched on to Riise’s long ball, shaken off Matt Jackson and sped into the left side of the area before placing his finish past Chris Kirkland. Seventeen minutes later, Bellamy scored right-footed from 13 yards, after racing clear of the back four after being released by Steven Gerrard’s volleyed pass.

The Wigan back line couldn’t handle Bellamy that day and they were grateful to see the lineman’s flag save them from more punishment on a couple of occasions. Bellamy also had a hand in the third goal when he set up Dirk Kuyt to fire home.

Ok, Ok, it was ONLY Wigan etc etc, but what’s even better about Bellamy is that when he’s one of yours, you can enjoy the fact he gets up people’s noses. Take David Hopps for example, who wrote the match report from that Wigan game for The Guardian.

After describing Bellamy as the Premier League’s most “caustic” striker, he went on: “It was Bellamy’s brilliance which delivered Liverpool’s first goals from open play, away from Anfield, in the Premiership all season.

“But the term “open play” does not really fit. He does not play openly. He skirmishes, niggling away on a defender’s shoulder and in the grey areas of the laws. His boundless energy and ambition gave Liverpool a cutting edge, and suggested that Rafael Benítez’s gamble on his dubious history might yet be rewarded, but much of it carries a disagreeable air.

“There can be no more galling experience in the Premiership. Bellamy does not defeat an adversary with respect and humility, as one of Liverpool’s greatest strikers and another Welshman, Ian Rush, was wont to do, but cuts him down like a two-bit mafia hitman, then returns to backchat over the body.”

Ah bless. Like I say, great when he’s one of yours though. But the best, and most important bit, once Hopps had stepped away from the character assassination? He concluded: “Man of the match: Craig Bellamy. Bellamy’s insistent and abrasive display shook Liverpool out of their away-day lethargy.”

What more do you want than that? Bellamy of course left Anfield after a season – mainly to help balance the books after the purchase of Fernando Torres. Now he’s back and Torres has gone who would you rather have considering current form and the money that has changed hands? Even after Bellamy left Anfield he still proved he could cut it.

That 4-3 Manc derby may best be remembered for “he who shall not be named” taking the splinters out of his bench-warmed arse to score the winner. But remember Bellamy that day? I’d wager Rio Ferdinand does. Because after firing in a 25-yarder to upset the Surrey set, he pounced on the mistake from Plug from the Bash Street Kids to score another.

United won it in the end but they were shit-scared of Bellamy, you could see it. If we can harness a bit of that and unleash it on defences tiring after tracking Luis Suarez, Stewart Downing and the rest, he could be a potential match winner. And you can never ever have too many of them.

As for his character, attitude or anything else the tabloid bores never tire about banging on about, well how about this as an endorsement from a fellow pro? West Ham’s Mark Noble went so far as to describe Bellamy as “one of the best professionals I’ve ever worked with”.

He said: “He’s so fired up and wants to win every game, and I can’t see anything wrong with that. For all that’s written and said about him, he one of the best professionals I have worked with. He’s great for the young lads. He’s good for them and good for the team. He says what he thinks and I don’t think that’s a bad thing. I know a load of players like that. But he gets the best out of people around him.”

Eddie Niedzwiecki coached Bellamy at Man City, and while he seems to endorse Sir Bobby Robson’s assessment that Bellamy is the “gobbiest footballer I”ve ever met” he’s another to break the myth of him being an uncontrollable firebrand.

He said: “People make assumptions about Craig and, often, they’re wrong. He’s matured a lot and he’s a top, top professional who wants to be the best and demands the best from his coaches and team-mates. He’s a winner who cares passionately.”

“Don’t get me wrong I know why people say he could start a row in an empty room. I’ve had my arguments with Craig and there are times when you have to pull him aside and have a word, but as long as you keep communicating with him properly and explain why you’re doing things he’s a joy to work with. He enjoys playing when things are properly organised and structured. If those things aren’t right he can become frustrated.”

Would anyone – other than “Big Sam” – be prepared to say the same about, say, El Hadji Diouf?

The final word, however, has got to go to Kenny Dalglish: “I don’t think his temperament will be a problem – he’s given up golf!”

That’s swung it for me…