After a lacklustre performance on Saturday against Norwich I thought everyone could do with cheering up. European nights in LFC history tend to do just that, so picking the top five was an arduous task. But here goes:

A controversial one to start off, possibly, as we’ve technically ranked it ahead of a 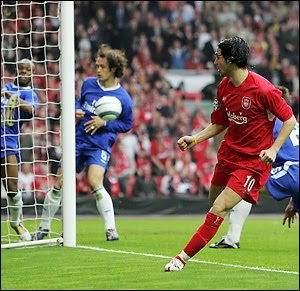 European Cup Final victory and people might not agree but there can be little doubt that in terms of a one-off match, it was a momentous evening. I’ve not experienced an atmosphere like that night for a long time; the Kop looked like the old Kop that night, everyone with a scarf or a flag. The ground was full half an hour before the kick off as I remember standing there thinking this could be another St. Etienne. It ranks here above Paris ‘81, St. Etienne, 4-0 over Real Madrid and Barca 2001 because we had no right to win that match. Our squad really didn’t match up to Chelsea under Mourinho but they were all that is wrong with football and despite having all the money in the world, they didn’t have our spirit – something totally priceless. As I write this I’m getting horrible flash backs to that Gudjohnsen chance at the death; even watching it back now I expect it to go in off the far post. Unbelievable. Fantastic game, fantastic achievement, and on we went to Istanbul…

Wembley with Kenny scoring the winner was something truly special. Souness fed the ball through and typical Dalglish, first to react and the coolest of finishes before sparking unforgettable celebrations with all the players hurdling the boards to join our mental scenes. It wasn’t the greatest of games with Brugge setting up to stifle us, but we got the goal we deserved before Thommo blocked one on the line in the closing stages. Some sods look back now and think… Brugge? Can’t have been great shakes? But they were an excellent side. They missed out in two European finals to us, reached a couple of European semi-finals, had a team packed with internationals and were managed by Ernst Happel, a great manager (winner of the European Cup with two different teams). A glorious night. 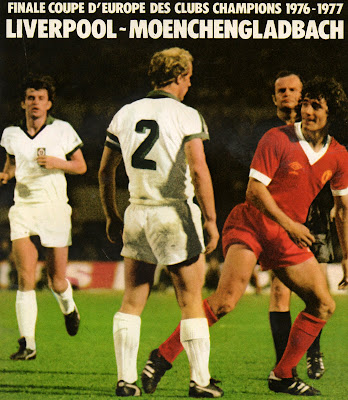 Having just won the league but having our treble dreams dashed by the scruffiest FA Cup Final in history, we still had the chance of achieving a landmark double but were underdogs in Rome against the Germans who had retained their league title and had looked so impressive in the earlier rounds. However, we took the game to them and Terry Mac gave us the lead after a trademark late run into the box. Even now I think ‘square it to Keegan!’ but he lashes it in every time. A stunning goal got Moenchengladbach back into it and we rocked a little at 1-1 with Clemence to the rescue but we composed ourselves and Tommy Smith’s bullet header from a corner got our noses in front – an emotional moment for everyone. Made up for him. Before Keegan’s turn of pace led to Vogts hauling him down and Neal tucked it away – Champions of Europe for the very first time. With Keegan on his way and the likes of Smith, Callaghan and Heighway coming to the end of their careers, it seemed that it may be a glorious end for a great team rather than the beginning of a dominant era. Few could have envisaged the success that was still to come…

We returned to Rome, the scene of our first European Cup triumph, to face the mighty

Roma in their own back yard, boasting the likes of Conti, Grazziani and Cerezo – it was a tall order. The city was decked out in Roma red, every house, lamp-post, fence featured scarves and flags and banners – it made us feel in no uncertain terms that we were in enemy territory and rank outsiders. But we arrived in Rome as English champions for the third year in succession; we’d just won the League Cup for the fourth time in a row, and were now set for an unprecedented treble so were extremely confident in our own ability. Thousands of Kopites made the journey to the Italian capital, many after spending a few days in the freezing Alps(!), and they roared the team on in the hostile Olimpico. Skippy’s cross was spilt for Neal to bundle home and we had an early lead before the Romans equalised and nothing could separate the teams. Onto penalties and Nicol blazed our first one over; cue that sinking feeling. But Conti did the same and it was left to Bruce’s spaghetti legs and perennial big game player Alan Kennedy to tuck his away and follow it up with a shite jump celebration! A fantastic treble success for Joe, and big ears number four!

Where do you start? The lowest of lows and the highest of highs. I’ve never before, during or since experienced so many emotions. The excitement of the road to Istanbul, the wins over Juve, Olympiakos and Chelsea and now I was off to Istanbul with 40,000 reds to turn this historic city red. The rollercoaster took off and we were flattened, Maldini inside of a minute followed by Kaka’s destruction of our game plan.  Half-time. Shell-shocked. YNWA rang out around the ground more in straw-clutching hope than true belief; I think had we expected to win then things may have been different, but really given our meteoric rise under Rafa we weren’t yet spoilt, we were underdogs and knew we were facing Europe’s best.  All we wanted now was some defiance and pride from our team in the second half.  Six minutes of mayhem later and it’s a different story. That game summed up what it means to be a Liverpool fan. From staring at potentially the biggest defeat in a European Cup final to one of the greatest comebacks in sporting – forget football – history. From Carra soldiering on with groin injuries, Stevie switching to wing-back like a man possessed, driving us on, to Dudek defying Shevchenko in extra-time when red hearts stopped all around the world – and then the shootout. Goosebumps. And the Turks were fantastic, nearly as mad as us. If this was a film you wouldn’t believe it.