Free Peace: Keeping Up With The Jones

FOOTIE and music go hand in hand for me, simply because both have the ability to excite, energise and create that spine-tingling surge of joy that only a small number of life’s pleasures can bring.

A great goal, a sublime bit of skill, a stunning riff or an amazing melody, all can leave you grinning like a wide-eyed child on Christmas Day.

The new Liverpool, the team playing passing football, with freedom and with smiles on their faces, has reignited my passion for a game that was dulled by the politics and bullshit of the Hicks and Gillett era.

My previously all-consuming interest in music had waned in recent years, too. Band after band, to these ears, sounded average, samey and didn’t inspire like acts that had come before. Much-hyped albums failed to hit the mark and generally were met with a shrug and a ‘well, it’s alright’.

Throw fatherhood into the mix and the change of priorities that brings, and I found it all too easy to rely on the old classics to give me my aural fix rather than seek out anything new.

But like with the Reds, my passion for music has been reignited. 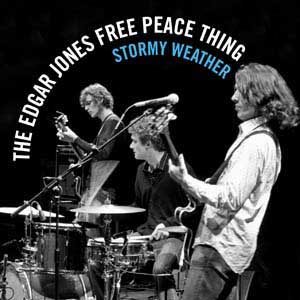 I’ve turned my back on the cold, emotionless download, and gone back to buying the album ‘for real’. That, I think, helps. An inlay to read and album art to admire is so much better than a name in permanent marker on a blank CD or a file icon on a computer desktop.

See it on the shelf and it draws you in, it tempts you to play it, unlike that cursory scrawl with an over-sized pen on just another compact disc.

And one album that I genuinely can’t wait to get my hands on right now is Stormy Weather, by The Edgar Jones Free Peace Thing.

Now, Edgar, for those that don’t know, is a Scouser, and a very musically-talented one at that.

I’ve had the pleasure of watching him play several times as the singer of the brilliant Stairs, on his own – supporting Paul Weller no less, and with The Joneses, another of his bands.

Record-wise, as well as the must-have mono Mexican R ‘n’ B and Revenge of the Golden Cabbage (eventually seeing the light of day on The Viper label, titled Who Is This, This Is The Stairs), there’s some lesser-known snippets from The Isrites and The Big Kids worth seeking out (Liverpool Unearthed Vols 1, 2 & 3, and 21st Century Liverpool Underground – all on Viper).

Simply, the fella knows his stuff. He lives for music, and it shows. He’s worked with Weller, Johnny Marr and Lee Mavers (for starters) and his first solo album, Soothing Music for Stray Cats, was nominated for a Mercury Music Prize.

He’s been accused, predictably, boringly, of living in the past. But he’s very much the musical purist, evidenced in this quote in a Mojo interview in 2008.

Asked how he achieved the great sound on his records, he replied:

“One of the best things I picked up from Lee Mavers, one of his ‘Mavers-isms’, was to not go crazy on the overdubs and basically make sure you’ve got five or six parts that really work.

“I mean, the late Hendrix stuff like Cry Of Love is great, but he was an absolute master of his craft. If you’re just starting out and you find yourself putting four or five guitar overdubs on a tune, it probably means the part you put down in the first place was wrong.

“I remember listening to the radio with my daughter last year and I had to point out to her why I didn’t like this Snow Patrol song – or maybe it was Coldplay. I noticed there were five instruments playing the same rhythm at the same time. D’ya know what I mean? What’s the point?”

Unsurprisingly, Noel Gallagher is a fan. He owes this city, that boy. Gallagher told the press that Soothing Music for Stray Cats “bent my head” and is “one of the best records I’ve ever heard.”

Edgar, though, seems to have some of the Mavers about him. The genius that to an outsider frustrates as you think he could produce so much more.

Whether that’s raging against the machine, being happy with his lot, or ineptitude from record companies, only Edgar and those close to him can know.

When Free Peace emerged, it sounded like he simply wanted to get back to playing good music and bollocks to the industry.

“Their sound is loud and heavy but contains a lot of soul. Led Zeppelin is a definite influence but The Jimi Hendrix Experience and the Southern soul sound of New Orleans also form an important part of the mix. Like the great rock bands of the late 60s Free Peace is all about respecting the traditions of jazz, r’n’b and soul music, something which Edgar feels that a lot of modern bands just don’t do.”

This, undoubtedly to my mind, would be boss.

Free Peace set off on a European tour supporting Oasis, the Gallaghers loved them, as did fans. It was all set up. The album was in the making – could Free Peace finally propel Edgar Jones to the standing in British music he deserved?

Well, no. It’s a loop I’ve long been out of, but for some reason Free Peace dropped off a cliff. No album. No tour. No news. No updates.

And now, two years later, this.

The fact it is emerging on Viper, and with a bastardised name, suggests the band is no more. Generally, the label sweeps up gems that would never glint in the light of day without their intervention.

So in that respect it’s a bittersweet release. But one, nevertheless, which I can’t wait to listen to.

More music from Edgar Jones can never be a bad thing.