THERE are a number of Wordsmiths that write on this website. I am not a Wordsmith by any stretch of the imagination, but I’d be intrigued to see if any of them could describe the people who are filling our ground with negativity with a better word than ‘Divvies’.

I’m not talking about people who’ll sit there and photograph opposition players while they’re taking a corner, or need to ask where the Kop is, or try and bring a shopping trolley full of food in to the ground (I’ve never seen this happen, but I’ve been reliably informed by someone who’d know that it has). They are divvies mind, but that really isn’t the point of this.

Take Saturday afternoon for example. We hosted Wolves, we readily cantered in to a 2-0 lead before the break, and for the forty six minutes all was good, an early goal was followed by a Suarez finish that had everyone in the ground waiting for the referee to blow the final whistle so we could all go home with our three points.

What did happen is, Wolves got a goal back after half time, and all of a sudden the World ended and a load of miserable bastards, somewhere in the region of thirty thousand of them, decided that the goal wasn’t just a goal, it was the footballing version a Priest reading us the Last Rites.

It wasn’t, we merely had forty minutes where we had to make sure Wolves didn’t score more goals then ourselves. At Anfield.

We achieved this, and whilst it wasn’t as comfortable as we’d liked I don’t really remember any ‘Oh shit, they’re gonna score here’ moments. In the meantime, we made their goalkeeper make a brilliant save from Suarez, Andy Carroll hit the post, Downing fluffed a one on one and Andy Carroll decided to do so form of Line Dancing deep in to injury time.

Regardless, we won. It wasn’t pretty second half, and it wasn’t as good a performance as the Stoke one, but we ground out a result. Which over the course of the last few years people have never tired of saying is the hallmark of a good side.

The real problem I had today, other than Jamie Carragher trying to organise a defensive line so far away from the half way line it was almost somewhere in the Norris Green area (I’m sure the lads will discuss that on TAW#8), came when the substitution of Jordan Henderson took place.

This is a 21 year old lad, 2 months younger than Martin Kelly by the way, who has played seven games for the club. Seven. We’ve played in as many European Cup Finals as he’s had games for Liverpool. What came once the numbers ’14’ and ‘18’ were displayed was disgusting. Henderson was jeered from the field by his fans, and made to feel about 3 feet tall.

Now let’s be honest here, since he came in you can’t argue that he’s looked like the player his price tag seems to demand that he is. 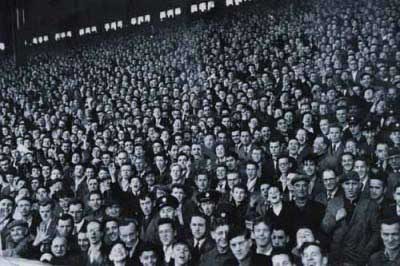 However, after the jeering had died down a discussion developed a couple of rows behind me, the conclusion by one season ticket holder in his mid-to-late fifties was that ‘Henderson isn’t good enough and he never will be’. I’m sure he isn’t the only one who has had the good grace to give him an incredible 544 minutes in a Liverpool shirt before they deem him not up to the job.

I’m not going to sit here and tell you Jordan Henderson has been brilliant because that would be a lie, but from what I’ve seen there’s a footballer in there, he looks a bit nervous and lacking in confidence but given time to adjust and get used to his surroundings he’ll be a player for us.

If he does this and he’s in our side for the next 10 years, no one will mention the price tag. How on earth can any rational human being deduce that he isn’t good enough when his biggest crime thus far, one on one at Stoke excepted, is being anonymous? He hasn’t been bad, he hasn’t been good, and he’s looked like a young player learning. Oh wait, that’s what he is. Funny that.

More broadly though, why are people so keen to get angry while they’re watching us? Moan moan and fucking moan, ‘this isn’t right, that isn’t right, why’s that happening? Why’s this happening? Why aren’t we 6-0 up? blah blah blah. You pay £800 for a season ticket and whinge. You spend hours on a phoneline, or sat in front of a computer spending £45 to go somewhere and whinge. These divvies are utterly pointless. We may as well lash the lot of them in the away end for all the encouragement they’re giving the lads on the pitch.

These are the same Divvies who booed when we went top of the league after a 0-0 draw with West Ham in December 2008. The same ones who booed Lucas on to the pitch in a game against Sunderland later that season. What exactly are they hoping to achieve through this?

This negativity permeated Anfield throughout the whole 2008/2009 season, if we weren’t winning after twenty minutes nervousness gradually crept down from the stands and seeped through to the players. Every misplaced pass was greeted as if we’d just given the opposition a goal, players were barracked for having the temerity to accidently do something wrong. “If it’s not perfection, it’s not good enough, Booooo, Lucas you useless cunt!” would make a good tagline for the Anfield crowd that season.

It’s getting to the stage where sections of our famous support is becoming a hindrance as opposed to the advantage it’s been through the years. It’s hard enough to break down a stubborn defence without getting on the backs of the players and making them afraid of getting thousands of voices pelting them with abuse if they so much as breathe the wrong way.

Anfield is best when it’s noisy, when there’s encouragement, when everyone is together. No one likes it when things aren’t going our way, I don;t, we all get frustrated. What on earth are people hoping to achieve by slagging players off though, apart from impressing their dickhead mates?

If you really think shouting ‘Oi, that’s fucking shite that lad’ is in the slightest bit productive then I’ll be honest, this is directed at you, and I, Philip Blundell, think you are a bona-fide , 100%, cast iron Divvy. If you fancy venting your frustrations, there’s a referee, two linesman and 18 players wearing the opposition shirt, scream at them for ninety minutes if venting at a football match is your thing.

There’ve been divisions in Anfield for as long as I remember (being 24, I started going properly in about 2000), people have 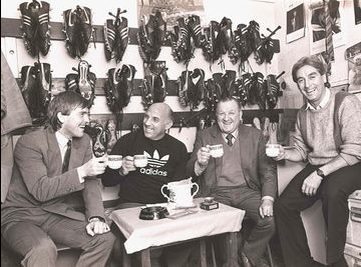 So, we're all in agreement then, Ian Rush is shit

always moaned, there’s always been negativity. Some didn’t take to Houllier’s football and they were in disagreement with people who saw his methods as returning us to the upper echelons of English Football, Benitez is probably the most divisive manager we’ve ever had, and then there was the Hicks and Gillett saga where some people had their heads buried in the sand until we were to all intents and purposes owned by a bank.

We were told that Dalglish, Kenneth Mathieson Dalglish, a fella that has dedicated the vast majority of his adult life to us and is rightly deified as such, would be the one who would unite everyone. It saddens, nay sickens me that even he, King Kenny, doesn’t appear to have had that power over a certain brand of divvy.

There’s still bickering, and moaning, and whinging. We came 6th last season, 7th the season before that. Our aim should be 4th this season and anything above that seen as a bonus. What part of the season so far has seen the barracking of players and infighting as something that can even be explained away as anything other than ridiculous? I’m struggling.

We sit in 5th, with two clearly better sides and one marginally better side above us as well as a Newcastle side who won’t be there for much longer. Clearly the a dreadful place to be.

I pay £40+ a week to sit in a ground surrounded by people I don’t like, who are paying the same amount to watch something they evidently don’t enjoy. To borrow a quote from Rob Gutmann, Kenny should tell them to fuck off.