What I Did On My Holidays

I went to the Edinburgh Fringe festival. That’s what I did. Three days in the company of my friend Stu. I’m going to tell you about it.

But let me make clear, I’m no expert on the old stand-up comedy. I like it when I see it, but I’m not that schooled, not that versed. I’m a bit green. What I find difficult with blogs, though not with my esteemed Anfield Wrap co-contributors obviously, are the occasions when the unqualified opinion of the writer is foisted upon us without clarification. Yes, we all have an equal right to a voice but all opinions are not equal and the internet’s democratisation of comment means it is difficult to seperate wheat from chaff – certainly if someone is giving it the big I am.

I’m not, therefore, giving it that. The aforementioned Stu could, but he’s too nice. He’s a comedy professional, a mover and a shaker in TV world. It was him who worked out who we would see and he gave me a bit of schooling about it all over gin, beer and whisky. I was, after all, on my holidays.

I got into Edinburgh at 2:30pm, was at my first show at 3 and in between sampled the architecture and the weather. One very fine, the other not. We tumbled into Todd Barry’s show American Hot wherein the American comedian tells us things that may or may not have happened to him in a very dry, very funny manner. It was a pleasure to be in his company but here I noticed – and later corroborated with Stu – something that reoccurred throughout the three days – it’s tough for them to keep your attention for an hour and tough for you to keep it fixed on them for an hour. This is a two way street. There are few people in the world you could happily listen to speak, alone, without interruption, for an hour straight, without having occasions where you lapse ever so slightly. Similarly, the performers themselves are rarely called on to do the hour that Edinburgh obliges. Having a satisfying hour, therefore, is tough.

Stewart Lee followed but his show was a work in progress, something he kept telling us, something that is on his flyers and tickets and it’s unfair to have a look into it now. I will be going to see how it turns out at Leicester Square Theatre later in the year though.

We then had a break (holidays) and saw Neil Hamburger late in the evening. He is astonishing. An American anti-comedian, a spin on the Bob Hope style gag merchant, utterly dripping in self-loathing. He clutches three glasses of water, his hair greased and scraped across his face and has a hacking, phlegmy cough. He disgusts and enthralls, barks and mewls and is, most definitely, the real deal. It was tears-down-the-face funny, though the six walkouts in the first ten minutes obviously didn’t agree. It’s a phenomenal creation and is at the Soho Theatre so if you are in London, go. 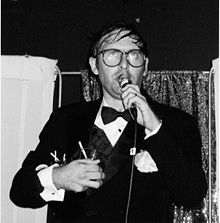 The following day we saw Mick Sergeant, the creation of writer, comedian and actor Lee Fenwick. Mick’s long term unemployed, a former Jarrow ship worker and he was being harangued by society and the taxpayer to get himself a job despite the fact that there were none for him. He was trying and failing at positive thinking despite it all. It was a thoroughly accomplished solo performance from Fenwick, one of real verve and charm despite the bleak essence of the story.

Another thoroughly enjoyable hour was David O’Doherty doing Rory Sheridan, reluctant Antarctic explorer. O’Doherty created an entire universe for us, taking us deeply into his unlikely story set in the Edwardian era and he told it with charisma, pace and verve. What marked both Sergeant and Sheridan out was that they had an hour, they had a narrative and while neither were filled with gags, both held the attention due to their own exploration of their created characters and universes.

Humphrey Ker as Dymock Watson: Nazi Smasher had gags, story, voices, magic, effects and bundles of energy. With a Boys Own edge – ah Barry Davies – and Blackadderish touches it felt like something you had seen a little of before but it was done brilliantly, performed with brio and every joke neatly crafted. I wanted to take everyone I know to it immediately after. He should tour this; if he does, you and me, we’ll go together, make a night of it…

Next was Lloyd Langford, an exceptionally talented young Welsh comic who pinned his show around pieces of trivia and did so with enormous charm. He’s my one to watch (counts for a lot that, Atko) and he feels a joy to be around. His closing segment, a discussion about which bird you’d fuck (actual birds, of the avian variety), was delightfully silly and his discussion of daft jobs he’d done rang completely true.

On the previous day I’d said to Stu I was stunned by how unpolitical what we’d seen had been and how there wasn’t much political comedy about. Stu said it can be very difficult to make political material work for a festival audience so when waiting to see Andy Zaltzman’s Political Animal night I was intrigued to see what worked and what didn’t as Zaltzman acts

as MC alongside four or five other performers on for fifteen minutes each. Zaltzman works – he himself is majestic with a terrific voice (in both senses) and a very quick brain and fixes you with stunning word play. He’s simply consumate and I want to be his best mate. Zaltzman wasn’t the problem. The problem had its finger put on by final guest Jon Richardson who made the point that everyone pretty much agrees with each other, performer and audience alike. If you are in The Stand in Edinburgh at 1am on a Thursday, what’s the likelihood you are voting Tory? Even thinking a little bit Tory? Richardson’s set was quietly impressive because he confronted this truth, discussed the Arab Spring and was willing to play on his own ignorance of events. He wasn’t assured like Zaltzman, wasn’t directly engaged like Josie Long, but he reflected something quite honest and very funny. He could do more of this. That he probably won’t bother is why it worked so well.

At Political Animal Josie Long looked to solve this problem by lapsing into squeals of indignation, personalising Cameron’s assault on everything she loves. She feels like she’s on the verge of doing something brilliant, but it doesn’t feel as though it can sustain, at least not in that environment. This isn’t Oxbridge satire, wry, distanced, arch. Its personal, driven and visceral; I’d like to have seen her full show. That even then I may not have liked it (and I don’t think I would have) but that doesn’t mean I, and we, shouldn’t wish more power to her elbow.

I haven’t discussed everything I saw. If you can’t say something nice and all that. Plus the eternal question of “Who are you, Atkinson?” stops me from sticking the boot in. I didn’t see anything I thought was bad. And what struck me was that it is hard work. The day I saw him David O’Doherty was doing four shows basically. Four! That’s got to be emotionally and physically exhausting.

I strongly recommend you see everyone I’ve named here. And I recommend you go to Edinburgh next year and get involved. The place is bouncing during the festival. Wouldn’t recommend doing more than three days though. It could drive you a bit bananas.