RETURNING TO THE NIGHTMARE OF HILLSBOROUGH

I wrote this in The Times in 2009. A lot of people will not have seen it. I’m not sure I can say anything to add to it. Nothing has changed since I wrote it. I still go back there, too often. God knows what the people who really suffered go through. 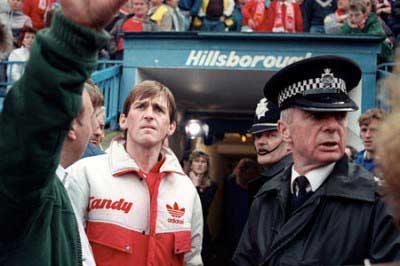 THE last time I was here, there was fear in the air. Looking down at the turnstiles from Leppings Lane, there was a tumult surrounding a tiny tunnel, a filthy, evil plughole sucking all life towards it and extinguishing the breath of all who were pulled into it. And it was dragging us towards it. We knew what was coming but could not break the crushing, malignant force. I’m here often, the last time about two weeks ago. In a nightmare.

Two decades ago, there were no bad dreams, just a sunny spring day and an optimism that was curiously out of kilter with the decade for Scousers. In 1989, with my mate – also called Tony – I came down the hill laughing and approached the crowd outside Hillsborough with confidence.

There were a lot of people eager to get into the game. Kick-off was looming and agitation was growing. But we worked the crowd, exploiting its pressing and ebbing, to gain yards. We had experience in this sort of thing – veterans in big crowds since junior school. We had been caught up in this sort of congestion countless times throughout the years, so we were soon at the turnstiles.

Then the first unusual thing happened. An exit gate suddenly opened and there we were, inside the ground, our tickets redundant. “See you later,” I said. “Tomorrow,” he replied. Then he walked down the tunnel.

His next words to me came some 36 hours later: “Have you ever felt someone’s ribs breaking under your feet?”

Why did you go down the tunnel? The question came 20 years later, after an emotional visit to Hillsborough, this time in waking hours. “I think,” Tony said, “I caught a glimpse of the pitch. That was it. I knew it was the worst place in the ground. But I saw the pitch. You know what it’s like when you see the pitch.”

When gate C was opened on the orders of the chief superintendent, David Duckenfield, a man in charge of crowd control for the first time on FA Cup semi-final day, April 15, 1989, thousands of fans spilt into the stadium bemused and clutching tickets. The only entrance to the viewing areas visible as they surged in was the tunnel. It led to two pens that were already horribly overcrowded. Now they were about to become fatally so.

“As soon as I was in the tunnel, I knew there were problems,” Tony said. “There was no going back. Just too many people. I kept telling myself to be calm, not to panic. I knew that if my head went down under the level of the crowd, I wouldn’t come back up. But the pushing just carried on.

“Then I was out of the tunnel. I thought it was over, just for a second. Then I knew it was worse. Much worse.”

People were still trying to force their way through the underpass, believing, like Tony, that the sunlight and terraces meant safety. Instead, horror waited. “I’d been turned around, facing away from the pitch, so I didn’t know what was happening behind the goal. It was hard to breathe and stay upright, but it had gone past the point of struggling and moving. My elbow was jammed into a fella’s neck and he was pleading with me to move it. He kept saying: ‘I can’t breathe, I’m dying.’ But I couldn’t move it. Then he stopped talking. His head went under.” 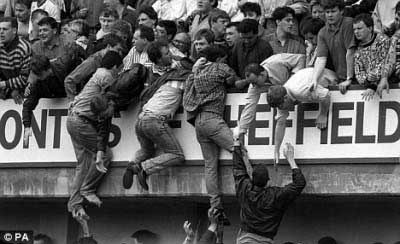 While Tony was fighting for his life, I was watching from a seat in the stands, trying to comprehend the enormity of what was unfolding. Most people around seemed, at first – like the police – to assume it was a hooligan incident. Then the sights became uglier. A young lad walked around the pitch, holding his arm up under his elbow. The forearm was broken at a neat right angle. Two fans were pumping at the chest of a big man wearing a red shirt. They gesticulated at police to help, but the officers stood by, seemingly paralysed. Then one of the would-be medics pulled up the red shirt, exposing a bare belly, and covered the man’s face. It sent a shock wave through the seats.

I had done some CPR training. As the boys on the pitch began to rip down advertising hoardings to create makeshift stretchers, I ran around to the tunnel again, hoping to help.

The exit gates were all open at the Leppings Lane, but a line of policemen stood still, on a diagonal, as if to stop anyone leaving. Near the tunnel, under the stairs to the upper section, people lay on the floor. For some reason I thought they were sunbathing. Then I realised they were dead.

How long did it last, I asked Tony. “It seemed ages. Hours,” he said. “Probably minutes. Then the crush eased off and I was pushed back towards the tunnel. There were three fellas there. Looked like they were in their 50s. We used to call big fellas Dockers. You’d say, ‘The size of him. He’s a Docker.’ Well these were Dockers. That’s the only way I can explain it. They were grabbing people, giving them a leg up and throwing them up to the stands, where people were pulling them up. One did it for me. Then I was looking down at the chaos.”

Outside, trying to stay calm, I asked a policeman a simple question. “How many?” His only reply was a huge, racking sob. Unable to control myself, I ran away up the hill crying. Almost 20 years on, I’m in the same spot. Still crying. Looking at that tunnel. It’s taken almost that time to stop running.

Inside the ground, Tony was making the transition from victim to rescuer without a second thought. “I started pulling up people; dragging them out. It went on for a while and then there didn’t seem any more need to be there. I walked out, saw some buses and got on one. There was only me and an old woman on it. Then I got the train back to London, where I was living. Everyone around was normal.”

But Tony was not normal. Some weeks later, he began to lose weight in a drastic manner. He saw his doctor, an ancient Irishman, who could find nothing wrong. The doctor asked his usual question: any serious traumas lately? Tony could not think of any. At home, he mentioned the exchange to his girlfriend, now his wife. After a moment or two of disbelief, she suggested that Sheffield may have fit the category. He was genuinely shocked. Hillsborough happened to the dead, injured and their families. He was just there. The doctor explained in blunt terms. “He said ‘We call it the weeping willows’,” Tony recalls. “You can’t cry, so that’s how it comes out. You’re weeping through your a***.” 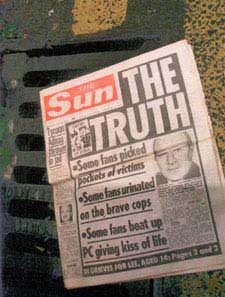 Despite the Taylor report. When, increasingly, opposing supporters sing: “You killed your own fans,” and otherwise sensible people repeat the accusations that ring across two decades with the hollow resonance of a great lie. When the coroner ruled that all of the dead were gone by 3.15pm, but Anne Williams has evidence that her 15-year-old son, Kevin, asked for his mum almost an hour later. When Andrew Devine, deprived of oxygen in the crush, remains in a vegetative coma, being cared for by ageing parents whose life was destroyed at the same time as their son’s.

You don’t. You go back to Hillsborough, like I did last week, and cry for the dead, the crippled and their families. But you also weep for the fools who believe “The Truth”, those who think that my friend and I were wilful killers.

And hope that justice will one day be done. That no one else has to live through something like this at a football match again. Because even us lucky ones have to dream.