PANIC on the streets of London, panic on the streets of Birmingham… and a bit in Manchester, West Bromwich and Liverpool to remix a well-known Smiths intro. But despite the countrywide acts of a desperate minority, I’d say things are looking pretty positive – a mood heightened by not having to watch England last night, granted.

Instead of that utterly banal Wembley jaunt, our attacking trio of Downing, Dirk and Big 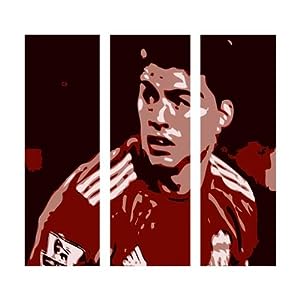 Andy could put their feet up and contemplate a season of Suarez-filled joy – just like I did. For El Pistolero is the man to build our team around. I don’t think I’ve been this excited about a new season since exactly a decade ago on the back of our cup treble.

I’m disinclined to liken Luis to the circus that is Carlos Tevez but put aside his Manc-association and general fuckwittery and you’ve got a bullish, talismanic forward who not only scores buckets of goals but – just as importantly – sets the tone for the rest of the team. Ring any bells? When we’re good, it’s often down to a frenetically charged tempo and that’s something that truly sets Suarez apart.

Off the back of a hugely impressive Copa America, where he was voted best player for his role in leading Uruguay to emphatic glory, Suarez’s stock has never been so high and it seems we all just can’t get enough.

For me, he has to play off a front man rather than on his own if we’re going to get the most out of him. We’ve got a midfield now with great legs – that’s legs as in Emlyn Hughes and Terry Mac rather than Kelly Brook and Elle MacPherson. And that midfield stamina negates the need to play a five; we can get away with the likes of Hendo, Kuyt, Stevie, Lucas, Downing and Raul in there as they all have great engines – allowing Suarez to play between the lines picking up knock-downs from Andy or going beyond him to stretch the play.

The attacking six will take care of itself; Kenny will see to that. The only concern is what Steve Clarke has to work with; we all know that Carra can take a bit to get going and Dagger can’t promise us 30 starts a season – neither can Fabio for that matter – and so the big test is partying in the front room without leaving the back door open. Whatever happens, 2011/12 is not going to be dull…