“[it] … was not a thing that could be concealed forever. You might dodge it successfully for a while, even for years, but sooner or later they were bound to get you.”
–  George Orwell, Nineteen Eighty Four

MENTION the year 1984 to Liverpool supporters and most, predictably, will recall Joe Fagan’s treble-winning side; Maine Road, Meadow Lane, Rome.

They’ll remember Ian Rush’s 34 league goals – a feat only matched in impressiveness by the Hansen/Lawrenson axis upon which the success was built. They’ll remember Souness’ last season, Sammy Lee in the middle and the effervescent, ever-present Alan Kennedy up and down the left-hand side.

But for those with a literary inclination, the year 1984 slams on a light switch in their mind. Pages are turned, synopsises are scoured and with a heavy heart they’ll recall George Orwell’s dystopian novel Nineteen Eighty Four.

It’s done so with a heavy heart because it’s one of the bleakest books ever written. Bleak, but brilliant.

For those who haven’t read it, do. Orwell somehow manages to capture a wretched, oligarchic society with language as raw, gritty and colourless as the cameras which follow people’s every movement and thought.

Orwell enters the reader into a world where cameras roam for constant surveillance. Mistakes are not tolerated. Big Brother is always watching. It’s a scarily accurate representation of how the world operates now with CCTV at every turn and police presence in every district – it’s made even scarier when you realise Orwell started to write the novel in 1948.

It isn’t just local communities that have undergone these changes predicted by Orwell over 60 years ago. Football has too.

Football coverage in Britain has come a long way since 20,000 Londoners watched Arsenal’s trip to Anfield on BBC2 in 1964. Now, it’s not blanket coverage of football – it’s a sleeping bag, and it’s suffocating football. 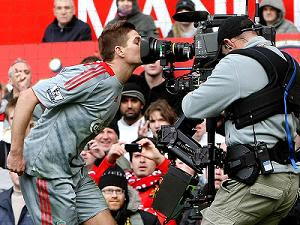 Every minute of every English league game is now caught on camera and distributed around the world. But that’s just the start.

Cameras focus on every player and their every movement, every referee, every supporter possible inside and outside the stadium. Cameras are stationed in Scotland, France, Spain, Germany, Holland, Italy, Brazil,Argentina, Japan, Australia. Every 17-year-old wonderkid or 36-year-old journeyman, every trick, flick or unforgivable mistake, stored in a limitless archive, waiting for the world to watch them.

Big Brother is certainly watching them, but he’s not the dark-eyed, moustachioed homage to Stalin that Orwell depicted – and this Big Brother definitely exists. It exists on the sofas of the BBC and SKY, in radio recording studios and behind computers, watching and monitoring all these movements and splicing them up into digestible chunks for the masses to consume.

Big Brother wants to show how magnificent Luis Suarez was over a hypothetical 90 minutes, so the 90 minutes of footage is filed down into 30 seconds; the poor moments – albeit rare – are excluded as half a minute of Suarez’s slaloms through the defence are played to the nation.

They also want to show how poor Martin Skrtel was. Skrtel’s footage is cut into 20 seconds, but his reading of the game is omitted; instead, his mistimed tackles are replayed, as are his poor headers.

That’s not to accuse the BBC, SKY or any television channel of propaganda; their highlight packages are 90 minutes maximum, sometimes with seven games to show.

But Liverpool fans know that, despite Luis Suarez’s splendour, it wasn’t the perfect performance; likewise, while Skrtel was troubled at the back, he wasn’t that dreadful.

They don’t know that about the other 19 Premier League clubs shown, and therein lies the problem. If Downing or Henderson aren’t highlighted every week by pundits, then they’re the supposedly the definition of average.

There are those who’ve watched Downing and Henderson yet to be convinced and their opinions should be respected; the difficulty begins when some judge them on those highlights – or lack of – alone.

A football fan can awaken at 10am on a Saturday morning, and as they start to slumber 15 hours later, they’ll do so having watched goals from last week and this week; goals live, goals delayed, goals in Scotland, England, Spain, Germany and Italy; goals from Adebayo Akinfenwa and Zlatan Ibrahimovic, goals analysed by Hansen, Shearer, Ballague, Claridge; misses by Jermaine Beckford.

Even if that football fan left, it’s all there on the World Wide Web when they return home.

Over the summer, Liverpool supporters have constantly lamented the club’s lack of activity on players they’ve espied on television; this summer’s main two: Mata and Aguero. There’s no denying these are talented players and would improve the team, but the sheer desperation from some unsettles.

Mata’s two-minute cameo on Revista’s highlights dazzles more than anything Downing’s ever done, apparently, even though one of Downing’s best qualities is his sheer consistency. It also leads people to believe they’re the same player in the same position, when nothing is further from the truth.

When Henderson signed, Sky Sports News replayed his cross against Wigan last season on loop, as if that epitomised his style. There’s

no doubting his crossing ability, but what can’t be portrayed on a YouTube compilation is the energy and intensity he brings when he steps on the pitch akin to a young Dirk Kuyt. His love for pass and move won’t make any highlight reels, but they could be just as important as Aguero’s goals, the same three replayed constantly on television after he signed for City.

Everyone’s an expert now. Ask for a left back and twenty different names fly back; link a 19-year-old reserve striker with the club, and people will suddenly become an ubiquitous footballing deity with an ability to name every attribute that player possesses.

I long for the days players such as Sami Hyypia were linked with the club and everyone trusted the manager and the club’s scouting network as opposed to an online compilation of Roque Junior set to music not out of place in 1990s Manchester.

Even ten to fifteen years ago, brief glimpses of European competitions were all we had for the likes of Babbel, Smicer and Berger. All came with slight reputations, but most importantly, most came with the Kop possessing an open mind – not regret they weren’t Reiziger, Rivaldo and Kluivert.

There’s nothing wrong with doubting Kenny’s judgement of course, there’s no thoughtcrime with this football club – but there should be a willingness to take his belief over a YouTube compilation or two-minute highlight package.

Big Brother may be watching, but it doesn’t mean he’s always right.