An article Peter wrote for The Face back in 1990; it’s as relevant now as it was then. 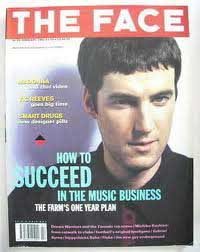 THIS year marked the tenth anniversary of THE FACE, but whereas parties have been thrown to commemorate this occasion, nobody has bothered to hold a ‘do’ for the tenth anniversary of the training shoe. It could be a unique occasion (possibly hilarious) and a fitting bash to celebrate a decade that has seen trainer wear break out on a massive scale. Training shoe espionage is now big business, and sportswear conventions where new designs are revealed have stricter security and secrecy than any Tory Party Conference: it seems that bootleggers know their stuff and can rip off a design before you can tie your laces!

I’m sure Adi Dassler and his brother Rudolf didn’t know what they were starting when they began making sports shoes in Germany in the Twenties.

After the war, the brothers had a row and split (good soap opera plot, this) and Adi formed Adidas and their kid formed Puma. The companies have been arch rivals ever since and it’s only fitting now that the two main rivals in the so-called ‘old school trainers’ wars are Adidas and Puma.

Much has been written about training shoes over the last couple of years, as the style magazines and the newspapers have tried to come to terms with the massive increase in the popularity of the trainer.

Empires have been built and fortunes acquired during the Eighties, and most ‘lazy’ journalists have looked to the States to explain the phenomenon.

Unfortunately, most of what has been written has been complete nonsense, so far from the truth that it’s not even funny. If the truth be known, the obsession with training shoes for the youth of this country began in the late Seventies and not in the late Eighties, as some would have us believe.

It came from the football terraces and the council estates of the big cities, and who gives a George Best who started it – it happened and that’s a fact.

Trainer wars were well underway and European away matches were the perfect opportunity to acquire those obscure training shoes available in Germany, but not in Liverpool.

Most of the training shoe addicts would never dream of getting a pair you could buy in the city centre in Liverpool. This was real fashion, and the competition was intense.

A revolution was going on that had absolutely nothing to do with the streets of Brooklyn or the Bronx. In all the years that The End magazine was printed in Liverpool, we never received a single letter about ‘trainers’ in America, but we did get hundreds about the training shoes the different football crews were wearing.

A football crew’s reputation could be severely damaged by giving it toes (getting chased) at Fulham Broadway, Finsbury Park or the Euston Road, but more serious damage could be done if a fatty was seen wearing a bad pair of trainers by the opposing teams’ fashion spotters.

In May 1981, Liverpool played Real Madrid in the European Cup Final in Paris.

We arrived at St Lazare Station on the Sunday before the game. The next three days were spent not looking at the buildings and architecture of gay Paree but for a mythical Adidas Centre which one of my mates overheard someone talking about in hushed tones in a Liverpool snug.

Naïve teenagers we may have been, but if we had found it we would have been heroes. The bemused Parisians didn’t know what the fuck we were on about when we asked for the “Adidas Centre” in several differing French accents. It was like the search for the Holy Grail, but more like the Monty Python film version.

The newspaper Paris Soir reported the antics of Liverpool supporters with some confusion. They had been drinking, but they didn’t seem to want to fight anybody. They were too busy shoplifting, with the main targets being clothes and, of course, trainers

By the morning of the game the sports shops of Paris were locked, with staff supervising the doors, allowing only two people at a time into the shop. A way of life had been born and no one had even heard of hip hop, house or rap, let alone Run DMC.

It was some time before the fashion magazines and newspapers started to write about this street culture, but when THE FACE wrote a big feature on the subject in its July 1983 issue the floodgates opened.

Within weeks, Time Out had an article written by London playwright and football fan Mick Mahoney who got it right when he pointed out that “if Nike brought out a crocodile-skin trainer for £140, it would be a smash”.

The football crowd and estate dwellers of the big cities didn’t give a monkeys what they were wearing in Harlem or anywhere else; if it looked good in the Anfield Road End, the Scoreboard Paddock or the Clock End, it was good enough for them. Over the next year, nearly every newspaper in the country, from the Mail On Sunday to New Society, had articles on this strange breed of training shoe-clad youngster.

As usual the sports firms were slow to respond, and even by the mid-Eighties you still couldn’t buy good, exclusive trainers in most cities. Europe, not the States, was still the mecca and many shopping trips by eager Scousers willing to supply the demand in their home city went some way to doing this. (It also increased the letters from German/Swiss nicks asking for copies of The End magazine to relieve the boredom.) 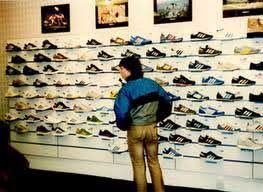 It was during this period that a young buyer for Adidas based in Liverpool (but originally from Yorkshire) set up shop in a small back-street in Liverpool City Centre.

He set up on his own because the company he worked for, Top Man, didn’t really know what was going on, on a street level.

After travelling to the Frankfurt Sports Fair he had wanted them to stock Adidas Forest Hills (white leather, gold stripes).

Wade Smith knew different. After laughing at the idea of launching Forest Hills in Liverpool, Adidas let him have 500 pairs. He put them on sale in the beginning of December 1980; by Christmas they had sold out.

Wade Smith was given salesman of the year in January and promptly left to set up shop on his own. He immediately set off for Germany in a van and the rest is history.

His four-storey department-style store is testament to that. The shop now caters for the mainstream market, but it was built upon bringing in exclusive trainers from Germany in the early Eighties, trainers that had nothing to do with America, but a lot to do with the nomad Scousers, and Wade Smith often supplemented his stock by buying from Liverpool ‘entrepreneurs’ with time on their hands to travel to Deutschland and acquire, by various methods, the much sought after, exclusive Adidas Trim-Trab.

Judy Rumbold, the fashion editor of The Guardian, couldn’t have been more wrong when she wrote about trainers (August 21 1989): “In Tom Wolfe’s Bonfire Of The Vanities, sneakers are documented as an intrusive part of young American street style; not just symbols of black affiliation and for high performance on the dancefloor but as crucial elements in maintaining a lugubrious, rhythmic gait that Wolfe coined the Pimp Roll. That was in 1987; now the fad has soft-shoed across from the streets of Brooklyn and the Bronx and become a cult throughout Europe.”

Apart from qualifying for Pseuds Corner in Private Eye and avoiding the use of plain English, what Rumbold was trying to say was that British youth had just discovered trainers in the late Eighties.

The hilarious Clothes Show even declared 1987 as the “year of the training shoe”. Have these people been in a time-machine or chained in dimly-lit rooms in Beirut? This myth has got to be quashed!

Anyway, everyone knows that training shoes have gone a bit crazy in the past few years. Hilarious designs have been churned out of the factories and many a massive tongue has been laughed at.

Competiton is cut-throat and it seems some of the designers have been taking some dodgy tabs (or suffering from over-worked stress syndrome), as the high-top trainer becomes more and more ridiculous.

Bad trainers now rule the market, but it has nothing to do with ‘fashion’, it’s mass consumerism (check Tony Wilson out in his Travel Fox). The main reason people have been wearing Adidas Shell-toes and Puma States in the past year or so is because Nike, Adidas, Troop, Converse, British Knights, Travel Fox, Reebok, LA Gear, Hi-Tec, Jordache, etc, are producing some of the silliest, shittiest trainers known to man (and woman). 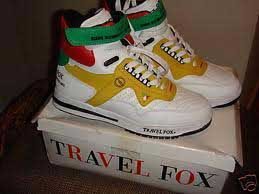 The frantic search for trainers past is simply a reaction against the shit trainers syndrome! Thankfully, according to Wade Smith’s sales figures, Liverpool is not a great supporter of multi-coloured high-tops.

Big, bad and sad should be the companies’ mottoes. Even Michael Jackson has designed a trainer for LA Gear, imaginatively called ‘Billie Jean’. It’s big, black and has more studs than a biker’s jacket. Unbelievable! Jackson must’ve been under the effects of the anaesthetic after a nose job to come out with something so bad.

It’s not whether old trainers are fashionable or not (many of the old school trainers were crap). The fact is that they are a million times better than many of the new trainers on the market and a lot harder to find.

Obviously American fashion does have an influence on the European market, but when the Sunday Mirror magazine declares “the high-top trainer rules the world and is this year’s trendiest fashion accessory, anybody who’s anybody knows that a pair of brand new trainers – bright laces undone, tongues out, displaying that all important brand name – says more about you than a wallet full of gold credit cards”, you know it’s time to leave the country and live on a desert island in your bare feet or search the loft for your ex-issue Diadora Borg Elite or Stan Smiths.

Let’s be plain here – the Sugarhill Gang circa 1979 dressed in Huggy Bear hipsters and hairy chests were the genuine NYC article. A generation away from the British urchins who started it all.

American persons who wear training shoes with suits and fur coats cannot be taken seriously. This isn’t another beautifully executed US import – it’s a slab of classic British hokum and there’s nothing LA Gear can do about it. That’s all.

P.S. Whatever happened to Gola?

* Wade Smith, formed at the beginning of the 80s, went from strength to strength and would be sold to the Arcadia Group in the late 90s. In 2001 Arcadia decided to reduce the number of brands it owned and sold it back to founder Robert Wade-Smith for around half the amount they had originally paid. In 2005 Wade Smith went to their bank (Nat West and owner RBS) seeking help in dealing with excess, expensive, stock but the banks “walked away” (perhaps already more interested in Texan cowboys), Wade Smith went into receivership and the shops closed down. In late 2010 the family announced that after years of retailing a number of different brands, “the time is now right to nurture and develop our own designed product.” They launched four new Wade Smith labels from their Hope Street base, their days as suppliers of those Adidas trainers now seeming to be firmly in the past.