Stan Bowles, plastic pitches and the longest journey I’ve ever been on

I LEFT Liverpool to go to drama school in London in the mid 80s, I was 19.

It wasn’t exactly the start of my career as an actor as I’d done a TV show called One Summer the year before and so had a bit of experience, but this felt like the start of my serious application and commitment to the profession. 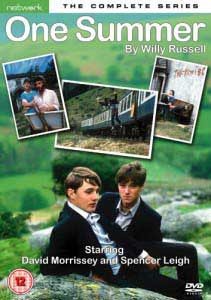 I’d been to London a few times before but never for any length of time, a school trip and a CND (Campaign for Nuclear Disarmament) march were my big London memories up to that point so I was more than a little apprehensive.

The train took just over three hours to get there in those days but it seemed like the biggest journey of my life, I guess that was because it wasn’t just a jaunt down south but a new life.

Drama school was great and I enjoyed every minute of it but London took a bit of getting used to. After the best part of a year living in smelly bedsits, squats and kipping on peoples’ floors I got a room in a council flat in White City.

From my rusting 1950s window I could see two landmarks that held great comfort for me.

One was the BBC TV Centre; I could see the Blue Peter garden and the circular walled offices that Roy Castle had tap-danced in front of only a few years before, breaking the world tap dancing record with 500 schoolchildren at his side.

The other land mark of deep significance to me was Loftus Road – the home of Queens Park Rangers.

Terry Venables was in charge at the time and they’d just installed their infamous ‘plastic pitch’.

But I’d always had a soft spot for QPR – my first ever game at Anfield was against them, I went with a mate from our estate called John Knox and we seemed to walk the whole way, I don’t remember any buses being taken, there or back.

We started our walk alone, chatting amongst ourselves, but every step of the way we seemed to be joined by more and more people till by the time we saw the ground I was in the middle of a teaming mass of bodies, all singing and shouting, clapping their hands and waving their scarves.

Even though it was a crowd of people the feeling was of one solid entity. We pushed through the turnstiles and headed up the stone steps to the back of the Kop and I got my first glimpse of the brilliant green of the pitch (even today I get a rush at seeing the pitch for the first time, it’s as if I’ve forgotten it’s there every week or that I worry they’ve taken it away and replaced it with a Tesco’s or something), but it was only a glimpse.

Suddenly I was heading down stone steps and John was legging it to the front, head down, weaving between legs and crash barriers to get as close as possible.

The voice of the legendary George Sephton on the tannoy boomed out announcing the team and every name was greeted with an ear splintering cheer from everyone around me.

And then the teams trotted out.

The place went wild, I’d never seen grown men behave like this, singing and screaming at these men in Red.

They sang songs for every player, who would turn and clap us as we sang their own particular song. I distinctly remember Tommy Smith took the piss out of Joey Jones for something or other and then the crowd started to taunt Stan Bowles, he’d been in the paper recently accused of shagging someone else’s wife and the Kop were remorseless in their goading of him.

If the intention was to unsettle him, it didn’t work, with Bowles instead turning to face the Kop and started clapping, just like the home team players having their names chanted. 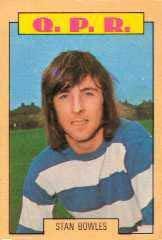 The Kop loved this and went wild, laughed and cheered him en masse. He was our mate from then on, he could take it, he was one of us, even though he was in a blue and white hooped shirt.

The whistle blew and from then on I was all over the place, thrown all over the Kop. I lost John, me pushed one way and him another, whenever we were on the attack the crowd surged towards the goal and you had no choice but to go with them, we scored and then I was jumping, cheering, hugging total strangers next to me and then I was off again on the storm of movement.

I can’t remember the score that day, I think it was 3-1, but I’ll never forget the whole heady experience of my first match. And Stan Bowles smiling like a cheeky cockney comedian, bowing, I think he bowed to us….can that be right? Does anyone else remember this?

I went to Loftus Road often while I lived in White City, and made some good mates down there, and at the Roebuck pub on South Africa Road.

QPR are back in the top flight this season and because of that memory we share, I wish them all the best, even if Neil Warnock does drive me round the twist.

David is the founder of C.A.S.T (Creative Arts School Trust), a charity whose aim is to promote the development of communication skills and confidence building in young people through drama, music, movement, dance and film in countries where there is little or no provision. You can find out more about C.A.S.T and make a donation via JustGiving here.