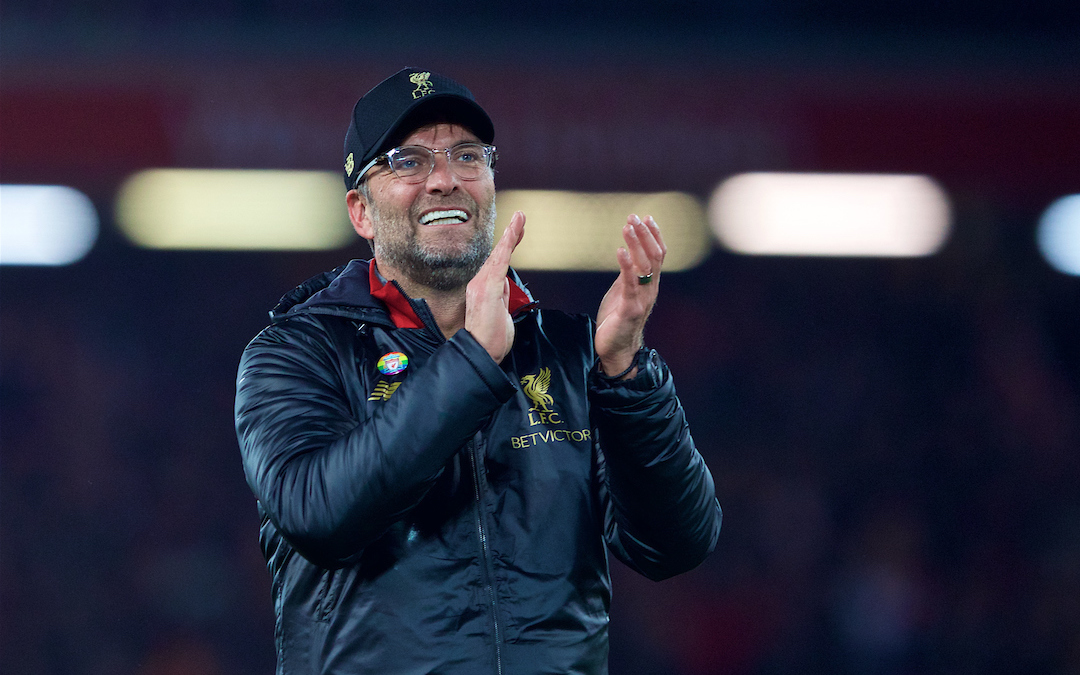 YESTERDAY we discovered Jürgen Klopp’s punishment for running a bit on Sunday was an £8,000 fine and “a warning about future behaviour”.

Basically like your dad telling you to pack it in. Which, to be fair, is probably what my dad would say if I ran on the pitch at the end of a Merseyside derby. So good to see some consistency in football at last.

This punishment will likely annoy certain sections of the media and rival fan bases, however. Who all were queuing up to have a “who can be the most outraged” competition in the 24 hours following the “incident”.

You can understand Everton fans getting angry, to a certain extent. They’d just seen their team concede a ridiculous last-minute goal so were going to be hurting. Although setting up a petition calling for a four-eight match ban was probably a touch over the top. But yeah, if I was an Evertonian I’d hate Klopp too.

You can also understand rival fans at the top wanting to see Klopp get in trouble too. Anything that might damage Liverpool’s ability to win football games, no matter how small, will be jumped on. We’re all obsessed, rabid hypocrites after all.

But the media reaction did take me back. Especially as at the time I didn’t even notice it. Too busy running round like a lunatic myself I guess.

Much of the BBC’s post-match reaction seemed to focus not on the drama of a last-minute winner, nor on a great day of derby football, but instead on a manager celebrating a bit more wildly than normal. In a clip from the 606 phone in shared wildly across the BBC’s social media, Danny Mills was heard to call the celebration “absolutely shocking”. If Danny Mills is that easily shocked, I hope he stayed in on Halloween.

Of course there was an actually “absolutely shocking” incident at another derby that day, with a banana being thrown at a black Arsenal player, but for some reason that seemed to get far less attention on Sunday evening. Why was that? Maybe people just couldn’t believe that someone would behave so appallingly in 2018. But maybe criticising Klopp just gets you more hits and views than criticising some neanderthal.

Despite an early FA charge, swift admission of guilt and a fine, the media have tried to keep the story going, asking almost every manager in this week’s pre-match press conference about the celebration. To be fair, none of them have bitten.

Pep Guardiola admitted he’d done something similar against Southampton, Mauricio Pochettino said he’d fancy beating him in a race and, much to the annoyance of his petition-starting supporters, Everton manager Marco Silva said he didn’t think he should be punished at all. I haven’t seen an Everton manager go against his fan base at Christmas so much since Ronald Koeman got the red tree.

It’s not unusual for managers to stick together. But there also seems to be an acceptance among most normal people who like football that it is an emotional game and it is better off with too much emotion than too little. We complain that atmospheres are poorer and players less interesting, yet whenever anyone does anything out of the ordinary the same people go mad.

Klopp shouldn’t have run on the pitch. This has been acknowledged by the man himself and the FA who have fined him. But for Liverpool fans it was brilliant. A clear demonstration that the manager cares as much as we do about a late winner in a Merseyside derby. There has even been talk of having a collection for his fine. Before everyone sensibly realised he has well more money than us and we’ve got Christmas coming up.

However, he’s a man who, from the start, has talked about wanting more feelings like that in football, not less, and that should be applauded. Even if he does occasionally need telling off. Like a puppy who sometimes just wants to go on a big run on the grass, even if he isn’t allowed.

The irony, of course, is that when Liverpool play Everton again it will be the picture of Klopp striding across the pitch that the media will use to sell the event. Along with big tackles and screaming fans. Passion, basically. We all seem to accept it is what makes football brilliant, but get all uppity when it’s in our faces.

What do we want? Sensible passion. Passion with smooth edges. Well I like my passion unbridled, if it is all the same to you. And so does Jürgen Klopp. And we’re right. So there.

“What’s £8,000? There’s no beneficiary to this, apart from The FA, who will spend it topping up the wrong salaries and not putting it into grassroots football.” 👏