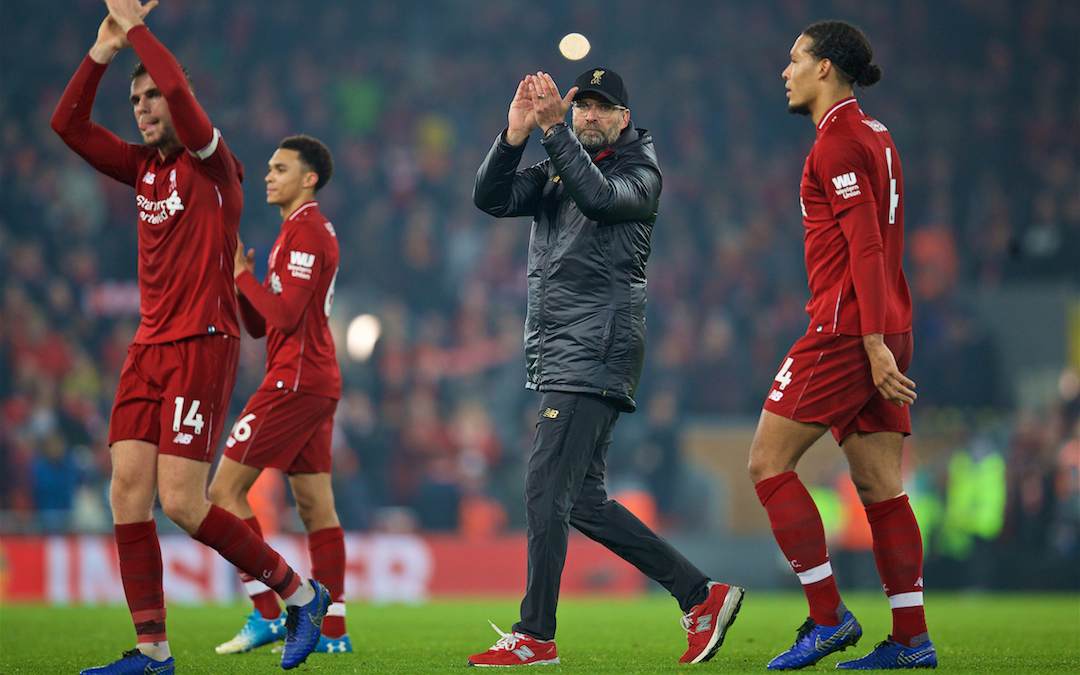 It is a marathon and a sprint. It is an 800m race, two laps of the track where you run as fast as you can. It’s long distance, it’s dead fast. It’s tactical, it’s breakneck. It’s momentum and it’s momentous.

We saw both of those today. We saw Liverpool’s irresistible momentum, when Newcastle United became powerless to resist, when having worked so hard to keep Mo Salah quiet they just had to foul him and give up, when there was nothing to do but take 2-0 and finally there wasn’t even that.

Liverpool were both brilliant and grinding, and had the momentum with them. The momentum today was set from the back, from Virgil van Dijk and Jordan Henderson. The former all assurance, the latter all demands of his teammates, of the referee, of himself. It was never going to drop with van Dijk on the pitch, never going to slow with Henderson.

We watch Liverpool, we love The Reds but we struggle to see at times how hard they are to deal with. Newcastle played well for 45 minutes, they worked really hard, kept shape, blocked passing lanes and all round were solid. They were 1-0 down and grafting like nothing on earth to do it.

We ask so many questions. Stop the main man, deal with Sadio Mane. To have a Mane solution, you need to have thought about Xherdan Shaqiri and Roberto Firmino. Want to stop the ball getting to them? Get on Henderson and Gini Wijnaldum. But what about the full backs? Sorted that? OK. What about van Dijk?

Rafa Benitez shared with us the metaphor of the blanket in football. Your blanket can cover your head or your feet but never both. There is no blanket equipped to deal with the irrepressible Reds.

Today showcased momentum but was momentous. The rumble and roar from The Reds when the news spread that Leicester City had scored a second against Manchester City was spectacular. It showed how engaged this club is with the business in front of it. Anfield was suddenly red raw, adoring its heroes, screaming in defiance.

For weeks football’s punditry class has wondered if Liverpool can continue to match Manchester City’s pace. It was looking in the wrong place. Since Divock Origi’s header Liverpool have been simmering towards the boil, whereas Manchester City have been cooling. A late goal conceded at Watford, and then Liverpool won at Bournemouth, and nothing has been the same since. Liverpool doubled down at Wolverhampton and City have so far been unable to respond. So far.

They are an excellent side with fabulous players. Tottenham Hotspur the same. So far. But Liverpool kicked 50 metres ago, have heard the bell and glanced behind them to see they have some space. This Liverpool side will presumably at some point wobble, but it won’t be through nerves. They have shown magnificent bottle to this stage of proceedings and they have a sudden strength, as well as a strength in depth.

People will say the challenge changes once you hit the front but people will be wrong. The challenge for Liverpool remains the same — keep winning. The glory of needing 100 points is that the challenge never changes. Win. Nothing but that. There is no room to manoeuvre.

Nineteen down. Sixteen won. Three drawn. Nineteen down and we know whatever happens against Arsenal we go to the Etihad ahead.

Nineteen down. Nineteen to go. Carpe diem? Carpe jugulum. These are our boys and they are showing their teeth.