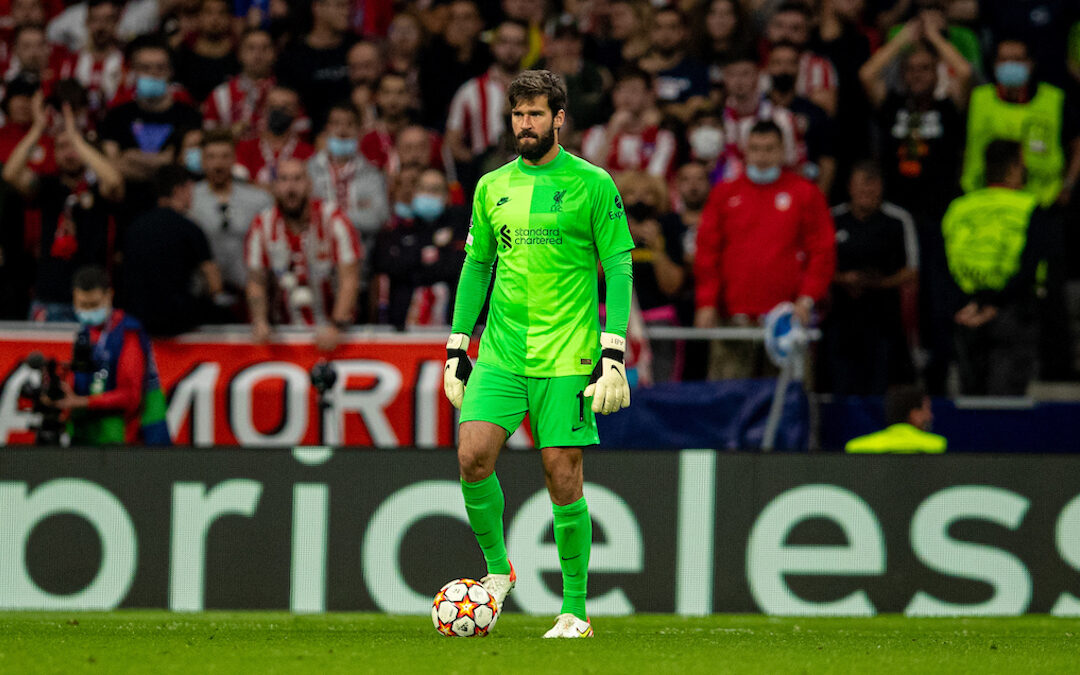 CRYING cunts them; to a man, woman and child.

To be fair the red card was harsh and the pen should have been a pen so, you know, maybe they had a point, but still…

Great save from Griezmann. Love the way he closes them down last thing as they are getting set to shoot. Must absolutely put the shits up you. Two great saves at 2-2. First one he does well to keep hold of it and the second he is like a bear pawing a salmon out the river. Could do with all them salmons fucking off, to be fair, second half. Kept it going, though, with a great save early on then didn’t have much to do once their fella booted Firmino’s head off.

Great defending to cut out a great through ball just before their goal. We got absolutely ragged down the right hand side but I’m not sure much if any of it could be attributed to him. Great big boot up in the air for the pen.

Not great for their second goal, to be fair. Gets himself facing the wrong way and then can’t turn quickly enough. Bit ragged. Looked just a bit out of sorts, positionally a bit ragged. Two games in three days? Needs to go through it, I suppose, so he can do it in the future, but even still. Extra point for punching Suarez in the head.

He’s unlucky for their first goal, really, as the lad is in his way to stop him clearing it. Not an obvious VAR fella but it definitely impedes him. Gets sort of stuck in a bit of no man’s land for their second, but then he is probably expecting his midfield to not let him dolly day dream his way through the middle of the pitch with the ball. Better second half.

Played the world onside at 2-2 and was lucky that Alisson saves from Lemar or we are 3-2 down at the half and people are fuming their cocks off. Was bad enough at 2-2, to be fair. Did well without being at his best.

Looked great at 2-0, but fuck me we looked like we had no one in midfield from about 20 onwards. Won’t be all his fault, or even just the midfield’s fault, to be honest. Similar to the Milan game, just switch off for a minute and then you get carved open.

Little bit of a reduction in the work rate, bad decision, turned over and exposed on the break. Ridiculous back heel at 2-2 to put them on the attack when we need to just manage the game to half time and take our medicine. Absolutely switches off on the edge of our box just after half time, when Alisson bailed every fucker out again. Managed his way through the rest of it though when he looked knackered.

Did he score the first? No fucker really knows, to be fair. Like the rest, played well then looked leggy as fuck from 20 onwards. Harsh yellow but he was always going to get one.

Naby: What score do you give there? I genuinely don’t know

Absolute output machine. Long loved by the stats lads for his ridiculous statistical numbers. Who knew that all he needed to do to get EVERYONE to love him was to start twatting volleys in the top bin. Is there an expected volley twat measure to add to his boss stats. EXvT.

Hang on, scrap that, I wrote all that at 2-0. Got ragged for their first goal, which wasn’t the best, and then got ragged for their second, which just seems a bit much if he wants to keep up the love in. He’s like a big tombola, dip your hand in and pull out an absolute surprise as to what you are going to get. The missing attacking link from midfield or a tactical mistake waiting to happen.

I think what’s fucking clear at this point is that what you aren’t going to get is someone who the manager trusts away from home in matches against anyone of any substance. I mean, it feels a little bit easy to pin all the blame for us being wide open on his shoulders, to be honest. Especially as it carried on when he wasn’t even on the fucking pitch, but we are where we are at this point.

Great run for the Milner, Kondogbia oggy, his goal. Looked sharp throughout when we could get him on it, but wasn’t in it enough. That was The Reds’ fault not his. Fucking made up with his pen. Would have loved him to pat the keeper on the head after he slotted. Cop for that, you big baldy cunt.

Dropped in and got on the ball really well all first half and made sure The Reds kept playing when they were under the cosh. Got booted in the head and their lad got sent off. Extra point for that. Anyone getting booted in the head in performing their day to day work duties deserves an extra point, if we are all honest with each other. Kept giving the ball away after he got booted in the head which again is probably understandable.

Imagine you worked in Maccies and someone jumped the counter and booted you in the head, presumably because you dished up a sloppy big mac, the absolute opposite of the picture. Looks like it has been used to clean your car window screen. Once the fella got sent off or out or down or whatever you wouldn’t be flipping patties without a care in the world, would you? Probably burn shite out of everything. Cut him some slack.

Carried on working his bollocks off till the end despite having no head.

Didn’t quite get into it tonight. Should have had some free kicks first half, didn’t get them, and then went missing a bit, to be fair. In the context of the game probably completely understandable, seen as though The Reds were shite for half an hour.

Was on the pitch a minute and broke up an attack right away, which to be fair is sound.

Was funny, the pen, wasn’t it? Fucking dope. Like poking a bizzie in the eye and then moaning when he nicks you and twats you in the back of the van. Then he decided to get in on the act. What a dope. Hahahahahahaha. Very lucky that, to be fair.

Good little run and shot just after coming on. Made a great interception in our box when they had broke. Good work rate to get back.

Was good and solid.

Might have to let Salah go and play him right wing every game.