IN HIS introduction to Folk Devils and Moral Panics, the classic study of the hysteria that greeted the pitched battles fought by the mods and rockers at various British seaside resorts during the 1960s, the sociologist Stanley Cohen observed that ‘societies seem to be subject, every now and then, to periods of moral panic’. 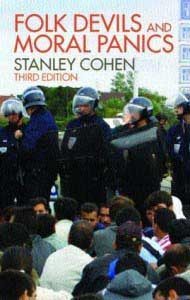 Something emerges that is widely seen to be ‘a threat to societal values and interests’. The nature of the threat is ‘presented in a stylized and stereotypical fashion by the mass media; the moral barricades are manned by editors, bishops, politicians and other right-thinking people’, before ‘socially accredited experts’ then ‘pronounce their diagnoses and solutions’.

For Cohen, moral panics are prompted by a ‘condition, episode, person or group of persons’. In the 1960s, it was the mods and rockers. In the 1970s, it has been argued, it was the punks.

More recently, you could say it was ‘chavs’ and the hooded youth who were seen looting branches of Footlocker and JD Sports during the summer riots.

Cohen called such groups, which are for a time almost unanimously vilified, and perceived as the symptom for all our societal wrongs, ‘folk devils’.

In the crazy world of the Premier League, and the perfect storm created by wall-to-wall media coverage and social networking websites, the reaction to events last weekend at Old Trafford confirmed that Luis Suarez has become a footballing folk-devil.

In reality, Suarez’s folk-devil credentials were firmly established long before the controversy with Patrice Evra and the handshake-that-never-was last Saturday lunchtime.

When he signed for Liverpool, he did not arrive as an unknown entity in the collective psyche of the football world. Two events dictated the narrative that was building up around the Uruguayan: the infamous biting incident whilst he was captain of Ajax, for which he was still serving a seven-match ban when Liverpool signed him; and, more importantly, his handball on the line during the World Cup quarter final the previous summer, which helped send Uruguay through at the expense of Ghana, a nation that many neutrals wanted to do well in the first World Cup ever to be held in Africa.

These events helped set the tone for how Suarez’s career in the UK was going to be presented.

When, for example, Alex Ferguson claimed that Suarez was ‘diving all over the place’ during a match last October (the same match at which Patrice Evra made his allegation of racism against the player), it tapped into a growing perception that Suarez was the embodiment of the ‘foreign disease’, a powerful narrative still casually repeated by pundits, commentators and fans alike in which foreigners are presented as being to blame for all the ills of the once-beautiful game.

The point of a moral panic is not so much the nature of the original folk devil – the event, action, group or individual that sparked it. Rather it is that the mass hysteria that works to exclude debate, complexity or competing interpretations.

During the clashes between the mods and rockers during the 1960s, for example, there was only one interpretation in mainstream discourse: namely that these youth, the first young generation with money to burn and things to buy, were out of control and were a symptom of what had become a permissive society.

Likewise, during last year’s summer riots, the possibility that the actions of the rioters might have something to do with mass unemployment or stringing cuts was overridden by the notion that the events were a symbol of ‘broken Britain’.

In the context of the narrative that had been built up around Suarez, when Partrice Evra made his allegation of racial abuse against him, there was only ever one possible outcome.

The moral panic that immediately followed – on the pages of tabloids, broadsheets, in the comment of television pundits, fans and even politicians – only increased when it became clear that Suarez had admitted to using the word “negro”.

It meant the subtleties of the case – in particular, the possibility that in the heat of the moment, Suarez could have been using the term with an altogether different, South American meaning – could never have been given full consideration by the FA or the independent panel that investigated the case, least of all by a media still in the grip of hysteria.

The moral panic that had developed also prevented a proper debate about the independent panel’s findings, and FA’s subsequent decision to ban Suarez for an unprecedented eight games.

Just as during the summer riots, when judges handed out custodial sentences even to people found to be talking about looting, the FA were widely commended for the severity of the punishment handed out to Suarez.

Again, the possibility that there may have been some grey areas in the case – that Evra had originally claimed Suarez used the word ‘nigger’ before withdrawing the claim, for example, or the fact the case boiled down to the word of one man against another’s – was largely ignored in favour of a celebration of the FA’s decision to once and for all drive racism out of town.

In many ways, the moral panic around Suarez reached its nadir last Saturday.

During the pre-match handshake, that embodiment of British fair play (introduced by Sky), Suarez’s decision to refuse Evra’s hand was somehow construed not as a disagreement between two players, but as a racist act.

For Alex Ferguson, speaking in the immediate aftermath of the game, the non-handshake was a sackable offence that ‘could have started a riot’.

Outraged by the initial failure of Liverpool to play their game, the media – sometimes influenced by previous partisan loyalties – were united in their anger.

As one prominent columnist put it, Liverpool had become ‘outraged by everything, ashamed by nothing’.

Finally, the politicians, as Cohen argued they would, ‘pronounced their solutions’

For George Galloway, writing on his Twitter page, ‘if Dalglish doesn’t sack Suarez, the Home Secretary should deport him’.

Liverpool’s PR department has been widely criticised for its handling of the Suarez affair. The biggest mistake was to have recognised only belatedly the severity of this moral panic.

Clearly convinced of the innocence of the player, they failed to realise that in the height of a moral panic, complexities, subtleties and grey areas – let alone the possibility of innocence – count for nothing.